Ukraine reportedly surrounding 10,000 Russian troops, as the momentum of the war started changing 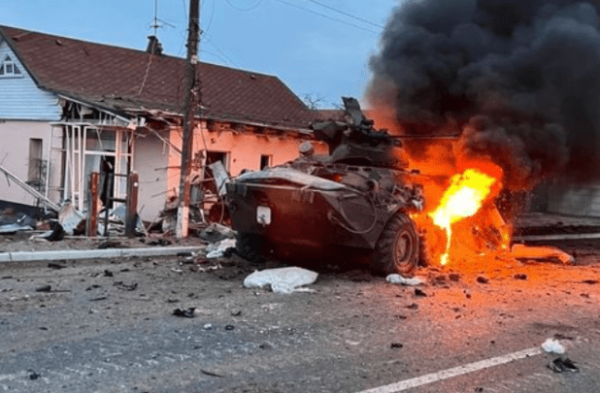 A Russian tanks destroyed by Ukrainian ambush near Kyiv
Share:

The claims of Ukrainian counteroffensives in the area surrounding Kyiv began more than a week ago. Now we have our first objective observations confirming that, yes, the Ukrainian army is on the move. And the Russians near Ukraine’s capital city could be in big trouble.

For four weeks after widening its war on Ukraine starting on the night of Feb. 23, the Russian army steadily advanced the roughly 50 miles from the Belarusian border to the outskirts of Kyiv. A separate, southwestward thrust from Russia into northeastern Ukraine reached the city of Chernihiv, 80 miles north of Kyiv.

A Russian air assault on Hostomel airport near the capital, beginning the first day of the wider war and carried out by Mi-8 assault helicopters hauling hundreds of paratroopers, ended in disaster for the Russians.

But the main ground assault, led by the Russian 29th, 35th and 36th Combined Arms Armies west of Kyiv and the 2nd and 41st CAAs east of the capital, was more successful in the short term. The Russian surrounded and besieged Chernihiv while creating a very loose, incomplete cordon around Kyiv at a distance of a dozen or more miles.

That success was fleeting. The Kremlin had planned on a swift capture of Kyiv and the immediate collapse of the Ukrainian government, all within two or three days. When that didn’t happen, the flaws in the Russian army’s planning became apparent.

Units were poorly led, under-equipped and—most critically—inadequately sustained. The Russian army never had enough trucks for its logistical battalions to keep up with a fast-moving invasion force. That shortfall grew steadily worse as the war stretched into its second, third and fourth weeks—and Ukrainian drones and missileers began taking out trucks by the dozens.

The upshot is that Russia’s attempted encirclement of Kyiv stalled out as the Kremlin scrambled to reinforce shattered, starving battalions. “They’re actually not trying to advance right now,” a senior U.S. defense official said of the Russians on Thursday. “They’re taking more defensive positions.”

While the Russians dug in, a general mobilization added tens of thousands of fresh troops to the Ukrainians’ ranks. Ukrainian battalions began rolling east from the relative safety of the country’s west. On or around March 19, these battalions made contact with the Russians west of Kyiv.

That’s when the momentum of the war may have begun changing. The first rumors that Ukrainian battalions had launched a counteroffensive west of Kyiv were impossible to distinguish from propaganda. On Thursday, however, we saw the first hard evidence of that operation, in the form of NASA’s fire-detecting satellites.

The Fire Information for Resource Management System, or FIRMS, satellites registered a very telling pattern of fires around Hostomel and Irpin, just west of Kyiv.

The blazes signaled intensive fighting along the roads threading through Hostomel and Irpin toward the capital. A similar pattern of fires was evident farther to the northwest, along the main supply routes connecting the Russian army to its railheads in Belarus.

The flames tell a story—of sustained clashes between reinforced Ukrainian battalions and idling, exhausted Russian battalions. The advantage appears to be with the Ukrainians, who on Wednesday claimed they had liberatedMakariv, a town 30 miles west of Kyiv.

As the Ukrainians close in on the Russians from the west while maintaining a strong defensive line to the east, they’re creating a pocket, surrounding the very Russian vanguard that, just a couple weeks earlier, had threatened to surround Kyiv.

This pocket, reportedly containing around 10,000 Russian troops from the 35th and 36th CAAs, is extremely vulnerable. As the Russians run out of food and ammunition, they may begin surrendering en masse—or risk annihilation.

The Ukrainian counteroffensive isn’t limited to the region west of Kyiv. A separate effort on the other side of the city is under way, as well. On Tuesday, the Russians were just 12 or so miles from eastern Kyiv. Two days later, they’d retreated 20 miles farther to the east and north, according to the Pentagon.

Ukraine’s counteroffensive around Kyiv doesn’t immediately relieve pressure on the besieged cities of Chernihiv and Kharkiv in the east and Mariupol in the south. It doesn’t immediately help Ukrainian forces fighting to liberate the southern city of Kherson from Russian occupiers.

But that could change. If the Ukrainian army can close and eliminate the pocket of Russian troops west of Kyiv, commanders might be able to shift forces east and south in order to launch or bolster counteroffensives there.

More broadly, the Ukrainian operation around Kyiv underscores the conclusion many observers of the war reached after just two weeks. Russia is no longer is winning. And it might actually be losing.

David Axe is a journalist, author and filmmaker based in Columbia, South Carolina.