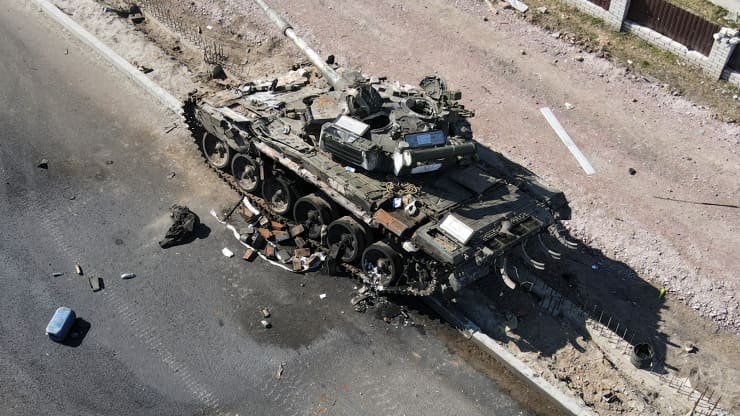 A charred Russian tank is seen, amid Russia’s invasion of Ukraine, on the front line in the Kyiv region, Ukraine March 20, 2022. Ukrainian Ground Forces | Reuters
Share:

More than 90% of Ukrainians believe their country will win the war with Russia, a poll by local research institute Rating Group showed. The survey of 1,000 respondents also found that 74% support direct talks with Russian leader Vladimir Putin.

The United Nations says 10 million Ukrainians have fled their homes, including those who have left the country and others who remain within the border.

Meanwhile, Ukraine President Volodymyr Zelenskyy made a direct appeal to Moscow and the people of Russia, claiming 14,000 Russian soldiers have been killed since the invasion began. Zelenskyy also warned of dire consequences if ongoing ceasefire talks with Russia fail.

And, according to Mariupol’s city council, Russian bombs fell on an art school in the city where about 400 residents were in hiding.

Russian forces advancing on the Ukrainian capital of Kyiv from the north-east have “stalled,” according to the UK Defense Ministry’s latest intelligence update.

“Forces advancing from the direction of Hostomel to the north-west have been repulsed by fierce Ukrainian resistance.”

The bulk of Russia’s forces remain more than 25 kilometers from the center of the city, according to the ministry.

The Hong Kong-listed shares of Rusal, a Russian aluminum producer, dropped by as much as 8.9% following an announcement by the Australian government that it would ban exports of alumina to Russia.

Several Australian ministries on Sunday jointly announced a ban on exports of alumina and aluminum ores including bauxite to Russia.

The ban is part of Australia’s sanctions against Moscow for its invasion of Ukraine.