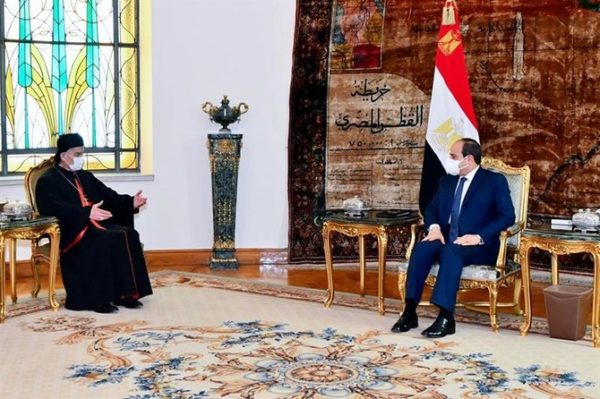 Egyptian President Abdel Fattah El-Sisi (R) affirmed his country’s pride at the depth of the close relations between Egypt and Lebanon, and Egypt’s keenness on its safety, security and stability. (Egyptian Presidency)
Share:

During a reception on Sunday for Cardinal Mar Bechara Boutros Al-Raï, Maronite patriarch of Antioch and all the East, Egyptian President Abdel Fattah El-Sisi praised the “constructive and essential role played by the cardinal in order to support Lebanon and restore its stability,” according to the president’s official spokesperson.

El-Sisi affirmed his country’s pride at the depth of the close relations between Egypt and Lebanon, and Egypt’s keenness on its safety, security and stability. He stressed the importance of achieving Lebanese national interests and sparing it from the dangers of conflicts in the region.

For his part, the cardinal affirmed Lebanon’s keenness to strengthen the historical relations between the two brotherly countries. He expressed his nation’s appreciation for the Egyptian effort to support Lebanon in all fields, as well as its role as a pillar and guarantor for maintaining stability in both Lebanon and the Arab region as a whole.

The cardinal affirmed that the Egyptian president was “ready to support the Lebanese cause.”

In an interview with MTV LEBANON, the cardinal said of his visit: “Egyptian President Abdel Fattah El-Sisi loves Lebanon and the Lebanese. I thanked him for the air bridge that he established after the port explosion, which expresses his love, and for opening the doors of Egypt to the Lebanese, and for his supportive positions always for Lebanon, and for the mediation with the Gulf countries.

“We discussed Lebanon’s internal issues, and El-Sisi expressed his regret for the situation Lebanon has reached. I told him that Lebanon is sick and we need to treat its disease, which is the failure to implement the Taif Agreement, and the solution is to declare neutrality.

“We regret that Lebanon has become isolated from the world, and the Egyptian president is ready to support the Lebanese cause, and he confirmed this. I told him that the solutions are not in the hands of the Lebanese alone to implement them, but there is a role for the Arabs and the international community.”

In the context of talking about the upcoming parliamentary elections in Lebanon, El-Sisi said that they “must happen, and we care about this in order to preserve the constitutional benefits, and voters must participate massively and make better choices.”

Lebanese media reported that in Cairo Cardinal Rai also met with Arab League chief Ahmed Abul Gheit who called on Lebanon to be an active member of the Arab League.

“Today, Lebanon is suffering from a disease. It must in its illness turn to friends and this is what we are doing today,” Rai said

He said he discussed with him the thorny issue of Hezbollah’s arms , and said he sensed in El-Sisi an interest in Lebanon and a keenness on holding the Lebanese parliamentary elections on time.