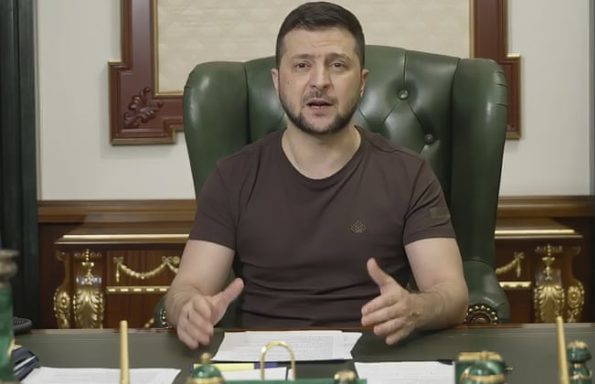 Ukrainian president Volodymyr Zelenskiy blasts Israel for failures to impose sanctions on Russia and aid Ukraine. He drew links between Vladimir Putin’s “final solution” for Ukraine and the Nazi extermination of the Jews as he challenged Israel in an uncompromising address to the Knesset.
Share:

Volodymyr Zelenskiy drew links between Vladimir Putin’s “final solution” for Ukraine and the Nazi extermination of the Jews as he challenged Israel over its failure to impose sanctions on Russia in an uncompromising address to the Knesset.

Speaking via video link, Ukraine’s president warned that indifference cost lives and that there could be no mediating between good and evil, as he challenged Israel over both the lack of sanctions and the failure to come to Ukraine’s aid with weapons.

Warning Israelis that they would have to live with their choices, Zelenskiy, who is Jewish, said Russia’s president was waging an “all-out war, illegitimate, intended to destroy our people, our country, our cities, our culture and our children

“The Russians use the terminology of the Nazi party, want to destroy everything,” he said. “The Nazis called this ‘the final solution’ to the Jewish question. And now … in Moscow … they’re using those words, ‘the final solution’. But now it’s directed against us and the Ukrainian question.”

Israel has condemned the invasion of Ukraine, but has not followed the west in imposing sanctions on Moscow. Under Israeli law, it can only do so to a state formally designated as an enemy. Israel also has an understanding with the Kremlin that allows Israeli forces to strike at Iranian arms shipments to Hezbollah in Lebanon or other Iranian-backed militia in Syria, where Russia has held up Bashar al-Assad’s regime.

Israel’s prime minister Naftali Bennett has instead sought to position his government as a mediator in the ongoing but so far fruitless peace negotiations.

Zelenskiy went on: “Everybody knows that your missile defence systems are the best and that you can definitely help our people, save the lives of Ukrainians, of Ukrainian Jews.

“We can ask why we can’t receive weapons from you, why Israel has not imposed powerful sanctions on Russia or is not putting pressure on Russian business. Either way, the choice is yours to make, brothers and sisters, and you must then live with your answer, the people of Israel.

“We are turning to you and asking whether it is better to provide help or mediation without choosing a side. I will let you decide the answer to the question, but I do want to point out that indifference kills.”

While there are significant doubts in the west about the peace talks, Turkey’s foreign minister, Mevlüt Çavuşoğlu, claimed that agreement on the terms of a deal was “close”. The Turkish government has also sought to act as a “mediator and facilitator”. Çavuşoğlu said there was “momentum” behind the negotiations.

Kyiv was said to be open to changing its constitution to abandon aspirations to join Nato, but wants Turkey, Germany and the five permanent members of the UN security council to act as guarantors of any deal.

Çavuşoğlu, who visited Russia and Ukraine this week to meet his counterparts, said: “Of course, it is not an easy thing to come to terms with while the war is going on, while civilians are killed, but we would like to say that momentum is still gained … We see that the parties are close to an agreement.”

The UN’s human rights office said on Sunday that at least 902 civilians had been killed and 1,459 injured as of midnight on 19 March, with the real toll likely to be much higher.

Most of the casualties were from explosive weapons such as heavy artillery shells and multiple-launch rocket systems, and missile and air strikes, the OHCHR said. It has not been able to receive or verify casualty reports from several badly hit cities including Mariupol.

Ukraine’s government claims that 112 children are among the dead.

UNHCR, the UN Refugee Agency, said 10 million people – about a quarter of Ukraine’s population – had now fled their homes, with nearly 3.4 million of the total having gone to neighbouring countries, mostly via the Polish border.

Speaking on Sunday, the British chancellor, Rishi Sunak, said it was “encouraging” that the talks were continuing but that the west needed to keep a “degree of scepticism”.

However, in an interview with CNN, Zelenskiy said that despite the doubts, he would continue to try to find a compromise with the Kremlin. He said: “I’m ready for negotiations. I was ready for the last two years. And without negotiations we cannot end this war.

“All the people who think that this dialogue is shallow, and that it is not going to resolve anything, they just don’t understand that this is very valuable. If there is just 1% chance for us to stop this war, we need to take this chance, we need to do that.

“But if these attempts fail, that would mean that this is a third world war.”

An official in Zelenskiy’s office told the Associated Press that the main subject discussed between the two sides last week was whether Russian troops would remain in the self-proclaimed republics in Luhansk and Donetsk.

Olha Stefanishyna, Ukraine’s deputy prime minister for European and Euro-Atlantic integration, told Sky News that redrawing Ukraine‘s borders is “absolutely not” being considered by Kyiv, a sign of the major obstacles remaining in the way of a deal.

She said: “Ukrainian territory is a territory which has been fixed [since] 1991. That is not an option for discussion.”

In an interview with the Hürriyet newspaper, İbrahim Kalin, a spokesman for Turkey’s president, Recep Tayyip Erdoğan, said six points were the focus of the talks. They are Ukraine‘s neutrality, disarmament and security guarantees, the so-called “de-Nazification” of the country, removal of obstacles on the use of the Russian language in Ukraine, the status of the breakaway Donbas region, and Crimea, which was illegally annexed by Russia in 2014.

Russia’s invasion of Ukraine has abruptly transformed the world. Millions have already fled. A new Iron Curtain is grinding into place. An economic war deepens, as the military conflict escalates and civilian casualties rise.