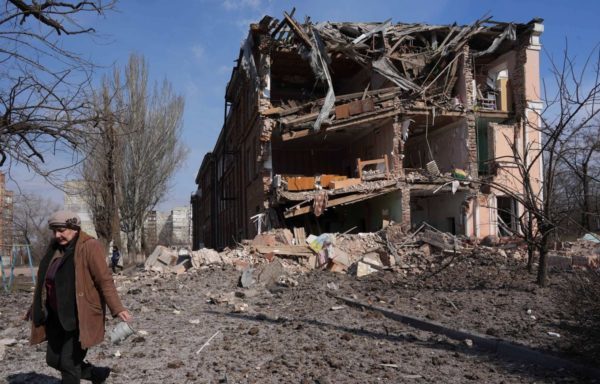 An art school where about 400 people had taken refuge in the besieged Ukrainian port city of Mariupol has been bombed by the Russian military, according to officials in the area. Local authorities said on Sunday that the school building was destroyed and people may be trapped under the rubble. There was no immediate word on casualties. Ukrainian officials also accused Russian forces of seizing several thousand Mariupol residents and deporting them against their will to “remote cities in Russia.”
Share:

LVIV, Ukraine — Amid a growing consensus that Russia’s invasion of Ukraine is morphing into a bloody stalemate that could last months, Ukrainian officials on Sunday blamed the Kremlin for a new spate of deadly attacks on civilian targets, including the bombing of an art school in the embattled port city of Mariupol where hundreds had taken shelter.

Ukrainian officials also accused Russian forces of seizing several thousand Mariupol residents and deporting them against their will to “remote cities in Russia.”

Ukraine’s human rights spokesperson, Lyudmyla Denisova, said on Telegram that residents were being transported across the border to a Russian city about 60 miles from Mariupol and then sent by train farther into the Russian interior.

Mariupol Mayor Vadym Boychenko likened the alleged deportations to the expulsion and slaughter of millions of Jews by Nazi Germany during the Holocaust, a theme also evoked Sunday by Ukrainian President Volodymyr Zelensky in a virtual address to lawmakers in Israel. “What the occupiers are doing today is familiar to the older generation, who saw the horrific events of World War II,” Boychenko said.

The reports of forced removals could not be independently verified given that few journalists or humanitarian aid workers have been able to enter Mariupol, where machine-gun battles rage daily between Russian forces and Ukrainian defenders. The Kremlin has not responded to the allegations, although Russian state media reported that buses filled with what they described as refugees have been arriving from Ukraine in recent days.

Linda Thomas-Greenfield, U.S. ambassador to the United Nations, told CNN on Sunday that she could not confirm the reports but added it would be “unconscionable for Russia to force Ukrainian citizens into Russia and put them in what will basically be concentration and prisoner camps.”

Mariupol, a strategic city of some 400,000 on the Sea of Azov, has become a vivid symbol of the devastation wrought by the unprovoked invasion, with massive craters opened by bombs and artillery shells and 90% of the city’s buildings reportedly damaged or destroyed.

The apparent bombing early Sunday of Art School Number 12, where some 400 people were said to be sheltering, follows a similar bombing Wednesday of a large Mariupol theater where more than 1,000 people were apparently hiding.

As in the attack on the theater, officials said there appeared to be people trapped under the debris at the school. “It is known that the building was demolished and there are still peaceful people under the rubble,” the Mariupol city council said on Telegram.

Zelensky said Sunday that Moscow’s relentless assault on the city “will go down in history” as a war crime.

“The terror the occupiers did to the peaceful city will be remembered for centuries to come,” Zelensky said in his daily address, marking the 25th day since Russia invaded Ukraine. “And the more Ukrainians tell the world about it, the more support we find.”

Despite reports of widespread destruction in Mariupol, there were growing signs that Moscow’s apparent hopes for a quick war and rapid Ukrainian capitulation have failed against unexpectedly fierce resistance and what many call miscalculations and missteps by Russian military planners.

In a new assessment of the war in Ukraine, the Washington-based Institute for the Study of War said that the protracted siege on Mariupol, while devastating, “is costing the Russian military time, initiative, and combat power.”

It said Russia’s failures to quickly seize control of Kyiv and other major cities have created the conditions for a “bloody stalemate that could last for weeks or months.”

The U.K. Ministry of Defense has issued a similar appraisal, saying Russia, after failing to win control of Ukraine’s skies, has adopted a “strategy of attrition” aimed at wearing down Ukrainian forces to the point of collapse. The agency predicted an increase in Russia’s “indiscriminate use of firepower” and warned of civilian casualties, the destruction of key Ukrainian infrastructure and a growing humanitarian crisis.

At least 847 civilians have been killed in the war, the United Nations says, although it warns the real toll may be much higher given that many parts of the country remain inaccessible.

Across the country, many more were trying to escape.

In the basement of a residential building in Kyiv, more than a dozen infants sat in cribs on Sunday afternoon, waiting to be evacuated.

The babies, born to Ukrainian surrogate mothers and bound for U.S. families, have been stranded here since March 4, when a bomb struck near the nursery where they were living. Since then, they have been looked after by a handful of caretakers who juggle feeding bottles and try to keep the distressed infants from falling ill.

“My family and everyone I know was screaming and shouting at me to go home,” said Svetlana Stetsiuk, one of the caretakers. “I stayed because these little babies need mothers.”

On this cold afternoon, Stetsiuk was preparing to say goodbye to one of her favorite charges, a 3-week-old named Romeo. Two men armed with automatic rifles were preparing to take him and another baby to safety via an evacuating train.

Stetsiuk swaddled Romeo in a blanket and tucked him into an insulated carrier. She whispered in his ear. He responded by touching her face. Then the men with guns carried the children away to an uncertain future.

Negotiations to end the conflict have been ongoing, but there was no word on new progress this weekend as the war raged on for a fourth week. The two sides have had several rounds of talks, but the discussions have run aground amid differences on some key issues, among them Russian demands for Ukrainian demilitarization, and various Ukrainian demands for security guarantees.

Kremlin officials have not responded to Zelensky’s requests for a summit with Putin.

Thomas-Greenfield said the U.S. supports Zelensky’s attempt, but tempered expectations. “The negotiations seem to be one-sided, and the Russians have not leaned into any possibility for a negotiated and diplomatic solution,” she told CNN. “But we’re still hopeful that the Ukrainian effort will end this brutal war.”

Zelensky on Sunday continued his tour of virtual speeches to lawmakers around the world, appealing to Israel’s Knesset, or Parliament.

Evoking the horrors of the Holocaust, he asked Israel to do more to help Ukraine.

“Our people are now wandering in the world, seeking security … as you once did,” he said.

Israel, which has donated medical equipment but not weapons to Ukraine, has sought to mediate an exit to the Ukraine-Russia conflict, with Prime Minister Naftali Bennett recently flying to Moscow to meet with Putin.

“It is possible to mediate between countries,” Zelensky said in his speech, which was broadcast live on Israeli television, “but not between good and evil.”

Meanwhile, reports rolled in about further war casualties. Ukrainian officials said Sunday that 56 elderly people had been killed in a Russian attack on a home for the elderly March 11 in the city of Luhansk.

There was still no official statement Sunday on the toll from a reported Russian bombing of a military barracks in Mykolaiv, a major Black Sea port and shipbuilding center about 300 miles west of Mariupol.

Rescuers were using shovels and bare hands over the weekend in search of survivors in the rubble of the barracks following a missile strike Friday. Various media organizations have reported dozens of casualties, which would make it among the deadliest Russian airstrikes to date on a military target.

McDonnell reported from Lviv, Yam from Kyiv and Linthicum from Mexico City.

Times staff writers Jenny Jarvie in Atlanta and Erin B. Logan in Washington, D.C., contributed to this report.