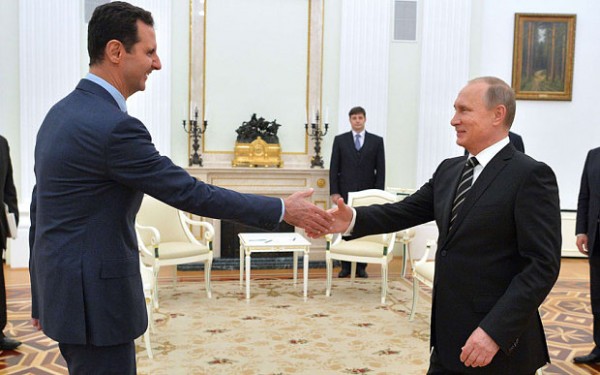 File photo of President Bashar al-Assad of Syria and President Vladimir V. Putin of Russia .October 21, 2015. Photo by Alexey Druzhinin/Agence France-Presse — Getty Images. Now pro-Assad Syrian forces will reportedly go to Ukraine to fight on Russia’s side in this war. All of this speaks volumes of Damascus’ indebtedness to Moscow.
Share:

The war in Ukraine gave Syria an opportunity to prove to Moscow that Damascus is a reliable ally of Russia amid its worst foreign policy crisis of the 21st century.

Syria is the only Arab state to support Russia’s recognition of Donetsk and Luhansk as “independent” republics and its invasion of Ukraine. Now pro-Assad Syrian forces will reportedly go to Ukraine to fight on Russia’s side in this war. All of this speaks volumes of Damascus’ indebtedness to Moscow.

Syria was one of only four countries worldwide to join Russia in recognizing Donetsk and Luhansk’s “independence”. The day the war began, President Bashar al-Assad told his Russian counterpart that “Western nations bear responsibility for the chaos and bloodshed.” Then, on 2 March, Syria joined only four other states in opposing a UN General Assembly resolution condemning the invasion.

With Russia facing high levels of international opposition to its invasion of Ukraine, this conflict gives Moscow’s closest allies opportunities to demonstrate loyalty to the Kremlin. “For Putin, the invasion of Ukraine is a clarifying movement of who is a friend, and who is an enemy,” explained Randa Slim, the director of conflict resolution at the Middle East Institute, in an interview with Politics Today.

Assad’s support for Russia in Ukraine has been necessary given Damascus’ dependency on Moscow. “Assad is forever indebted to Putin,” Mona Yacoubian, a senior adviser at the U.S. Institute of Peace, told Politics Today. “Moreover, as a brutal dictator whose regime has been accused of war crimes and crimes against humanity, Assad has no compunction about supporting Russia in its brutal and illegal invasion of Ukraine.”

With Russia having done so much to help turn the tide in Syria beginning in 2015, saying that the Ba’athist regime’s survival is largely attributable to Moscow’s military intervention is no exaggeration.

“Syria owes almost everything to Russia (and Iran) in the last eleven years,” Marco Carnelos, a former Italian diplomat, told Politics Today. “Without Moscow’s military support it is quite uncertain that Bashar Al-Assad [would] have prevailed in the civil war that has so far ravaged country. On these political points, Syria had no other option than to recognize Donetsk and Luhansk Republic and support Russia’s position on the conflict in Ukraine.”

Danny Makki, a non-resident scholar at the Middle East Institute, explained how close Damascus and Moscow have become over the years. “Syria has been more than just a Russian ally in recent times, it has developed a deep relationship with Moscow which patrons Damascus both in the Middle East and on the world stage. Syrian recognition of Donetsk and Luhansk – albeit unofficially – was a pre-determined move agreed by the two countries. The over-the-top support for the invasion of Ukraine has also been a prominent feature where almost all Syrian officials have been speaking as regularly and as consistently as possible in defense of Russia,” Makki told Politics Today.

On 10 March, Putin gave the green light for foreign “volunteer” fighters to enter Ukraine on Moscow’s side. That same day, Russia’s Defense Minister Sergei Shoigu stated that “more than 16,000 applications” from the Middle East—presumably mostly Syria—came in. One day later, Russia’s Defense Ministry shared footage of pro-Assad Syrian fighters chanting while holding banners of Putin and Assad along with the letter Z (a symbol of support for Russia’s campaign in Ukraine).

Russia welcoming support from its closest Arab ally for the war in Ukraine is understandable, particularly given Moscow’s major difficulties and setbacks amid this conflict. Russia sees these Syrians as “low-cost mercenaries”.

Carnelos told Politics Today that “maybe Russia needs soldiers better trained to the sort of guerrilla warfare that apparently is taking place in Ukraine, and that it is quite like what we have been watching in Syria all along these last years.”

According to Makki, the Syrian Arab Army has, at least for now, refrained from formally recruiting these pro-Assad fighters. He said there would have to be a presidential decree or something similar for any special dispensation. “It is most likely that the pool of recruits heading for Ukraine will be from the rougher auxiliary forces several of whom already have a past history in dealing with the Russians in Syria, such as National Defense Forces.”

Jomana Qaddour, a resident senior fellow with the Atlantic Council’s Rafik Hariri Center and Middle East Programs, where she leads the Syria project, said one should be cautious before reaching definitive pronouncements given how issues surrounding the recruitment question are evolving. “Most sources indicate that [the ex-National Defense Forces] are still only in a phase of registering volunteers, and not actually transporting them to Ukraine yet,” explained Qaddour.

Nonetheless, pro-Assad Syrian fighters entering the fray could prove problematic for Moscow. “Even if these fighters are transported to Ukraine, there are serious concerns about their lack of urban combat experience since in the Syria context many of them were tasked with intelligence work or manning of checkpoints after the Syrian government would capture land – and would task them, instead of official state forces – with carrying out war crimes against subdued populations,” according to Qaddour.

Cultural and linguistic barriers can’t be overlooked. These Syrian forces, who don’t speak Russian or Ukrainian, will be unfamiliar with local conditions. Also unclear is the Russian government’s ability to financially compensate these Syrian forces, particularly mindful of the economic problems that Russia must contend with as the world’s most sanctioned country. Qaddour told Politics Today that upon considering these factors, “it is likely cheaper and more practical for them to recruit pro-Russian fighters from neighboring countries.”

An important question is, how could the transfer of these Syrian forces to Ukraine weaken Damascus’ control of territory which it has spent years fighting to retake? Carnelos said that Damascus faces a “hard dilemma: honoring its debt towards Russia but doing so it risks losing ground somewhere in its endless civil war.”

As the war in Ukraine further internationalizes, anti-regime forces in Syria might seize opportunities to re-intensify their insurgency. “To have Russia bleeding more could be the moment to reignite the low intensity warfare that the Syrian battleground has been experiencing for a few years,” Carnelos told Politics Today. “Multiplying the fronts where Russia is engaged is the best way now to further complicate its Ukrainian adventure.”

As Slim put it, “The more difficulties Putin’s army experiences in Ukraine, the more his position will weaken in Syria mainly because of diversion of leadership, manpower and military resources to Ukraine away from other military theaters Russia is involved in including Syria.”

Yet under such circumstances the Syrian regime could count on support from its Lebanese ally. “Hezbollah can send enough fighters to make up for the shortfall in manpower should the Assad regime experience difficulties in holding on to territories it has retaken,” according to Slim.

Ultimately, it remains to be seen how Russia’s military campaign in Ukraine plays out on the ground in Syria. To be sure, the war in Ukraine has given Syria opportunities to prove to Moscow that Damascus is a reliable ally which is willing to help Russia amid its worst foreign policy crisis of the 21st century.

With Syria continuing to depend on Russia, demonstrating such loyalty to Putin is a high priority for the regime in Damascus. But the price that Assad must pay for his country’s close alliance with Moscow is one that will be realized in coming weeks and months as the Russian-Ukrainian war rages on.