Zelensky tells Putin ‘what are you afraid of, I don’t bite’, as he seeks face-to-face talks 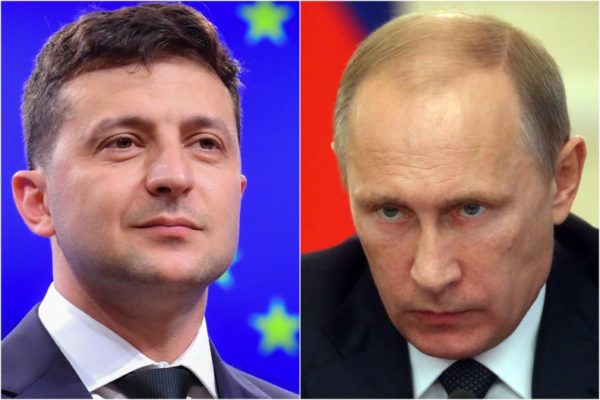 Ukrainian President Volodymyr Zelensky (L) has emerged as a new hero while Vladimir Putin’s has emerged as evil ion his war against Ukraine . Texas Republican Rep. August Pfluger described Zelensky in an op-ed for USA Today . “Bold courage in the face of evil,” .Zelensky told Putin ‘what are you afraid of I don’t bite’ as he seeks face-to-face talksEMMANUEL DUNAND-AFP/SASHA MORDOVETS/GETTY IMAGES
Share:

Ukraine’s President Volodymyr Zelensky called on Russian President Vladimir Putin to sit down and talk in person amid the ongoing conflict in Ukraine.

Zelensky sent a message to Putin on Thursday, saying during a televised news conference, “Good Lord, what do you want? Leave our land. If you don’t want to leave now, sit down with me at the negotiating table,” according to a translation from journalist Max Seddon. “But not from 30 meters away, like with Macron and Scholz,” Zelensky added, apparently in reference to the long table Putin uses for meetings.

“I don’t bite. What are you afraid of,” Zelensky also said, according to the Associated Press. “Any words are more important than shots,” he added, emphasizing the need to negotiate, though he acknowledged that prospects for another round of talks don’t seem promising.

The president’s comments come just one week after Russian forces began their invasion of Ukraine, which has continued to intensify. The two nations sent diplomats for a round of peace talks at the Ukraine-Belarus border on Monday, but little progress was made.

The Ukrainian president has requested Western leaders to impose a no-fly zone over significant parts of his country, saying, “If the West does this, Ukraine will defeat the aggressor with much less blood,” in a statement to Axios.

“If you do not have the power to close the skies, then give me planes,” he said during Thursday’s news conference.

However, U.S. Representative Sara Jacobs, a Democrat from California, said in a statement Saturday that if NATO and the United States implemented a no-fly zone, they could get pulled into the war. She added a no-fly zone is something that is enforced, not just announced.

“It requires our fighter jets to go directly against Russian fighter jets, to get them to stay out of a certain airspace,” she said. If the U.S. were to enforce the zone, it may have to shoot down Russian jets, which would mean “the United States declaring war on Russia.”

“The risks of two nuclear powers going to war are dramatically increased by a no-fly zone. This is unimaginable, and would risk many more civilian casualties than a no-fly zone would save,” Jacobs added.

Meanwhile, Russia continues to attack Ukrainian cities. Ukraine’s state emergency agency posted on Facebook that at least 33 people died and another 18 were injured in a residential area of Chernihiv, a city north of the capital Kyiv. The number of casualties could be higher, but rescue operations were temporarily paused due to extensive shelling.

The U.N. human rights office said the latest numbers show at least 240 civilians have died and 553 have been injured since the beginning of the war, but the actual numbers are feared to be much higher.

Zelensky continued to request help from other countries and NATO, saying, “If we are no more, then, God forbid, Latvia, Lithuania, Estonia will be next,” during Thursday’s news conference.