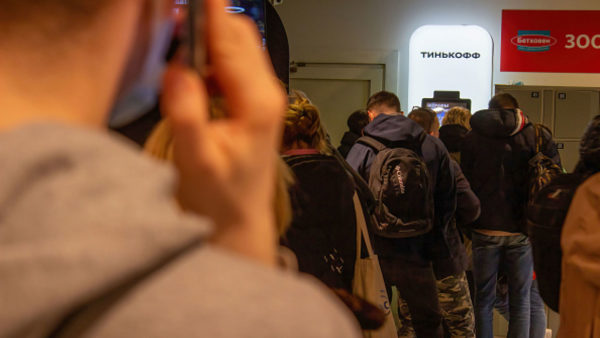 The crash of the ruble and fears of spiralling economic hardship amid stringent Western sanction are hitting ordinary Russians [Getty]
Share:

In a landscape with scant reliable polling data, the Levada Centre have published surveys which suggest that 22% of the Russian population want to leave the country for good – with the number far higher among young people.

Over 40 percent of Russians between the age of 18-24 want to leave the country for good, according to independent Russian polling group Levada Centre.

The survey was conducted in the week preceding Russia’s invasion of Ukraine, and prior to the imposition of crushing sanctions that are having a drastic impact on the Russian economy – and the daily lives of Russian citizens.

Forty-four percent of respondents to the survey who expressed a desire to leave the country cited economic concerns as their primary reason for wanting to leave.

“Whoever had been in two minds will now be persuaded to leave as the iron curtain comes down,” said Lev Gudkov, head of the Moscow-based Levada Centre in an interview with Russian news station Kommersant FM.

Since the start of Russia’s invasion of Ukraine, the word “emigration” has seen a fivefold increase in internet searches, according to Google trends – suggesting that the number of those looking to leave heavily increasing.

After western countries imposed a raft of coordinated sanctionsdesigned to cripple Russian institutions and individuals, citizens have been queuing for hours to withdraw their cash from ATMs and banks across the country.

The ruble crashed to less than 1 US cent, losing nearly 30 percent of its value since the start of the invasion, heightening fears of spiralling inflation and economic hardship for ordinary Russians.

The doubling of interest rates to 20 percent last week also added to the economic fears of Russian consumers and mortgage owners, who were increasingly looking for ways to leave the country for good.

In Russia’s repressive information landscape, it is notoriously difficult to get reliable polling data on attitudes towards events in Ukraine.

However, two Russian pollsters – VTsIOM and FOM – published surveys on Friday which suggested approximately two-thirds of the Russian public supported the Kremlin’s war in Ukraine.

The more widely trusted Nevada Centre is yet to publish data on the topic, but have charted in previous surveys that Russian attitudes towards Ukraine were trending increasingly negatively in the build-up to the invasion.