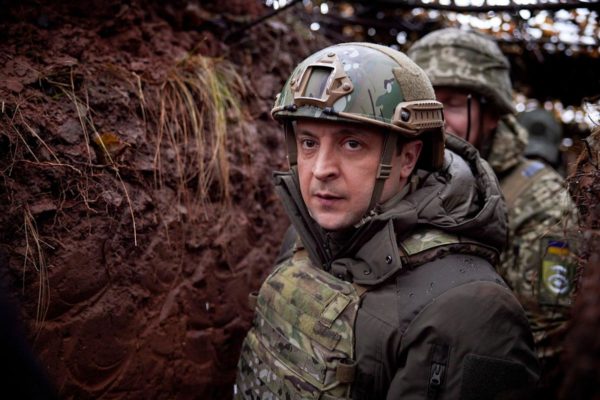 Ukrainian President Volodymyr Zelenskyy, who has shed his tailored suits and is now dressed for battle in hunting gear, has refused to leave Kyiv and has been pleading for Western governments to take tougher measures against Moscow.
Share:

By Courtney Kube and Corky Siemaszko

Two days in, the Russian offensive appeared to be stymied by stiffer-than-expected resistance from highly motivated Ukrainian armed forces.

Despite an overwhelming advantage in manpower and equipment, the Russian advance lost some of its momentum Friday and the quick victory Russian President Vladimir Putin was counting on is no longer assured, a senior United States defense official told NBC News.

“We do assess that there is greater resistance by the Ukrainians than the Russians expected,” the official said. “They are fighting for their country.”

While Russian forces are threatening the capital, Kyiv, and other major cities like Kharkiv and small-but-strategic cities like Rivne, none have have been taken so far and the Ukrainian air defenses remain largely intact, despite being targeted by relentless missile attacks, the official said.

Former CIA director David Petraeus echoed that assessment in an interview with MSNBC.

“They are encountering more significant resistance and more determination than I think they expected,” Petraeus said.

“The Russians have not collapsed the Ukrainian command and control,” Petraeus said. “They haven’t taken even remotely a major city yet….This has to be unsettling to them.”

Still, Petraeus said he expects the Russians will eventually defeat the Ukrainian army.

“They’ll defeat the Ukrainian conventional forces, that’s again, not in question,” he said. “It’s how long it takes, how determined can they be as they’re taking very tough losses.”

Western Ukraine, which borders NATO member Poland and where the U.S. and other countries are maintaining a diplomatic presence in the city of Lviv, “remains largely undisturbed,” the official said.

And while a Russian amphibious assault involving thousands of soldiers was underway west of the city of Mariupol in the Sea of Azov, the official said the assumption is that those forces are bound for the Donbas region, which is a pro-Russian area where Moscow-backed separatists have been fighting the Ukrainian forces for months.

“Contrary to great Russian claims, and indeed President Putin’s sort of vision that somehow the Ukrainians would be liberated and would be flocking to his cause, he’s got that completely wrong, and the Russian army has failed to deliver, on Day One, its main objective,” British Defense Secretary Ben Wallace said.

Wallace’s assessment came as the outskirts of Kyiv were being pounded by Russian missile strikes and machine guns were being handed out to civilians preparing to defend their city from the invaders.

Ukrainian President Volodymyr Zelenskyy, who has shed his tailored suits and is now dressed for battle in hunting gear, has refused to leave Kyiv and has been pleading for Western governments to take tougher measures against Moscow.

“I think they are going to fight,” James Stavridis, a retired Navy admiral and former top NATO commander, said of the Ukrainians on NBC’s “TODAY.” “The government in Kyiv has handed out 18,000 rifles to the populace. They are restricting all men age 18 to 60 from leaving the country. Clearly Zelenskyy, he’s out of his suit. He’s wearing his hunting gear. This is going to be a tough fight for the Russians.”

“It’s definitely our view that the Russians intend to invade the whole of Ukraine,” Wallace told Britain’s Sky News, adding that Moscow is already “behind its hoped for timetable” and has lost more than 450 personnel.

The Ukrainian Department of Defense claims the Russians have suffered 800 casualties, a figure Moscow disputes.

NBC News has not confirmed the numbers of any injuries or deaths on either side.

Putin insisted his military is winning the war and continued to cast the biggest European invasion since World War II as a defensive measure.

“Our soldiers are successfully fulfilling the task of protecting our people and our Fatherland,” he told Russian media.

The UN is “gravely concerned” about the situation in Ukraine, and is receiving increasing reports of civilian casualties, the spokesperson for the UN High Commissioner for Human Rights Ravina Shamdasani said Friday.

“Civilians are terrified of further escalation, with many attempting to flee their homes and others taking shelter where possible,” Shamdasani said, adding that “the military action by the Russian Federation clearly violates international law. It puts at risk countless lives and it must be immediately halted.”