Ukraine’s military claims it has shot down multiple Russian aircraft 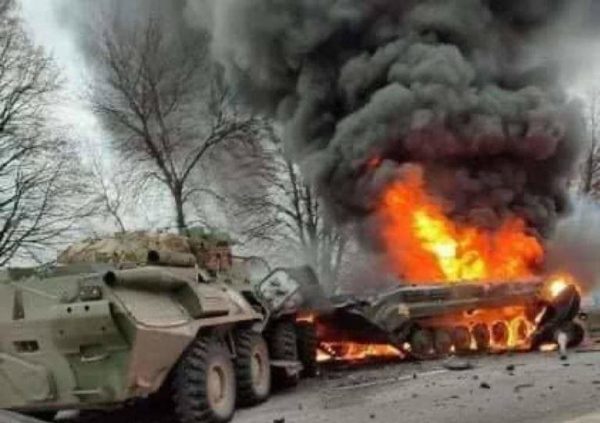 THE UKRAINE MILITARY RELEASED A SOCIAL MEDIA VIDEO OF WHAT APPEARS TO BE A DOWNED RUSSIAN HELICOPTER. SCREENSHOT FROM ARMEDFORCESUKR TWITTER.

Ukraine’s military is showcasing the Western weapons it’s using to shoot down helicopters, blow up tanks, and repel the Russian invasion.

Early Thursday morning, President Vladimir Putin ordered his armed forces to begin a “military operation” on his neighboring country. But Ukrainian forces appear to be putting up a fight, at least according to the country’s official social media accounts.

“In the Glukhov area, the military used Javelin anti-aircraft missiles and neutralized a column of Russian equipment,” reads a translated post from the Ukrainian armed forces circulating across social media and accompanied with a photo of burning Russian T-72 tanks.

In another post from the same account, a video shows what appears to be a crashed Russian Kamov Ka-52 attack helicopter, with a blown off wing. No Russian soldiers are pictured, and the cockpit is completely empty.

“Russian helicopter damaged!” reads the post, which says the chopper is lying in a field not far from Kyiv.

In the lead up to the invasion, the U.S. and European allies provided Ukraine with a series of “lethal aid” packages, which included weapons that have historically helped other forces slow down tank and helicopter attacks. Among them were Javelin anti-tank missile systems, and Stinger missile systems, which have a history of downing Russian helicopters. The need for both weapons systems has now come to pass as a mass tank and helicopter mobilization are helping lead the Russian invasion force into Ukraine.

So far, early reports from the Ukrainian forces claim they have shot down at least five Russian planes and one helicopter. In the late afternoon, the Facebook account of the Ukrainian military also posted an image of what it claims is a captured Russian soldier from the 74th Motorized Rifle Brigade.

According to the post, an entire platoon from that unit surrendered to Ukrainian forces.

“No one thought we were going to kill,” said the alleged captured soldier who appeared in a photo with a bandaged shoulder. “We were not going to fight, we were gathering information.”

But other videos show a precarious picture for Ukraine. Early afternoon Thursday in Kyiv, CNN captured video of Russian paratroopers defending a captured airport near the Ukrainian capital.

Part of the Ukrainian military strategy of spreading video and social media posts is to both appeal for Western aid and reinforce the idea that the Volodymyr Zelenskyy government has a legitimate fighting force that will not yield to Russian aggression.

Dmytro Kuleba, Ukraine’s outspoken Minister of Foreign Affairs, issued defiant statements in the early hours of the morning after the invasion, appealing to the world for assistance.

“The world must act immediately. Future of Europe & the world is at stake,” he said before providing a list of five things his country needs to repel Russia, which included more, “[w]eapons, equipment for Ukraine.”