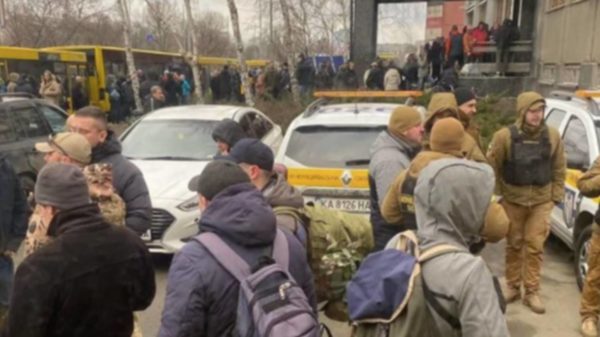 Long lines of people queuing on Ukraine’s streets to give blood and sign up to defense forces following the president’s speech
Share:

Hundreds of Ukrainians are lining up to fight and donate blood after their president called for the public to help wounded soldiers.

Images from local and international news organisations on the ground show men queuing up around official buildings to sign up for the fight against Putin’s army.

Russia’s full-scale invasion started this morning and Ukraine has since confirmed 40 people have been killed in the fighting, according to the Independent.

One Ukrainian man said: “This will be the beginning of the end of the Russian Empire.

“Let’s unite! This is a test for each of us. We are strong, do not break us!”

He said: “In those hospitals where blood is needed, please, I ask you to join and become blood donors for our defenders.”

Long lines of people queuing on Ukraine’s streets to give blood following the president’s speech were captured by Channel 4.

Hundreds of Ukrainians line up to donate blood after President Zelensky called for the public to give blood for wounded soldiers. pic.twitter.com/wSMHxe3Vgl

He said: “Given the queues, there are many more people wanting to donate their blood to create reserves for exceptional situations.”

A member of medical staff on site said: “Whether they will suffice or not, I can’t tell as of now.”

Another news organisation published a photo on Twitter showing a long queue of men who it claimed were hoping to register for the territorial defence units in Kiev.

One person commented: “It is sweet and fitting to die for one’s country.”

Another wrote: “That’s right, you need to take weapons.”

Others joined the conversation with more sobering points of view.

Luis Castillo wrote: “When the duty of the country calls, even the crying of the mother is silent.”

BBC News has since reported that other European countries are preparing to accept Ukrainian refugees fleeing the invasion.

The UN refugee chief Filippo Grandi said: “We estimate that more than 100,000 must have already moved out of their homes in Ukraine seeking safety in other parts of the country.”