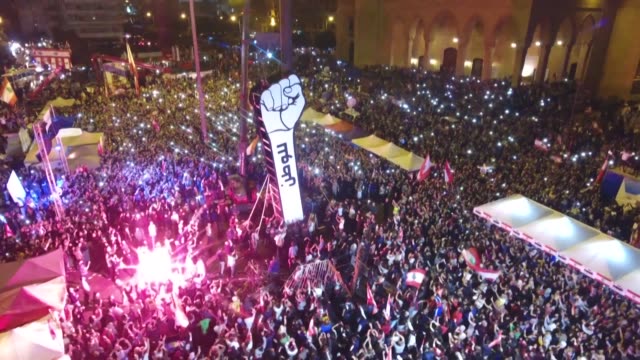 Lebanon’s first post-uprising parliamentary polls will likely be marked by an exceptional level of corruption and manipulation – unless a binding international agreement is brokered, allowing Lebanese to vote in relative freedom and security. There is, fortunately, still a limited window to reverse course

Two and a half years after prolonged street protests brought down the Lebanese government and revealed the deep financial and political rot within it, Lebanon is finally set to hold parliamentary elections on May 15. There is growing doubt, however, about whether the longstanding political establishment – mainly comprised of government officials, legacy political parties and business elites – will allow the polls to proceed; enough powerful internal and external actors may yet see it in their interests to indefinitely postpone them. But even if a vote is held on time, the country, on its current trajectory will likely experience one of its most chaotic, corrupt and illegitimate elections since its independence in 1943. This will ensure, among many other negative outcomes, that the ruling establishment which so many Lebanese blame for their country’s swift decline won’t meaningfully change, save for some internal reshufflings amongst “frenemies.”

There are at least four reasons for this state of affairs. First, Lebanon’s ruling establishment, aided and abetted over the decades by an impressively diverse group of countries, has, in the words of the World Bank, “deliberately” sunk the country into one of the three worst depressions in the modern era and still refuses to implement any reasonable policy responses. It is illogical, then, to assume that this same group will somehow allow for a peaceful transition through an election or a serious dilution of their iron grip on power.

Establishment politicians, of course, profess that if elections are held, they will be conducted normally. Indeed, most of them predict that not much will change as a result, despite all the wreckage of the past two and a half years. If this wasn’t enough of a signal about what is likely to come, one should recall that the ruling establishment’s (in its majority) well documented negligence and criminality resulted in one of the largest non-nuclear explosions in history, killing, maiming, wounding and mentally scarring tens of thousands on August 4, 2020. It is therefore quite reasonable to assume that “all means necessary” will be employed to ensure regime continuity after May 15. In fact, some in the establishment, especially those facing an existential threat to their familial rule (including some figures regularly labeled as “pro-Western”), have reportedly already revived the “breaking bones” approach that they employed shortly after the October 17, 2019 uprising broke out.

The second factor underlying Lebanon’s looming election disaster is the widening chaos and institutional failures over the past two years which have made stealing an election easy and relatively cheap for the ruling establishment. So many Lebanese, including those securing and administering the elections, are so desperate that the rampant vote-buying in past elections should look quaint by comparison. With most polling centers additionally unable to ensure electricity and reliable internet, voting and ballot counting will likely be conducted in the dark – all of which means that Lebanon, for the first time, could face manipulation of the election results themselves. While every election since the end of the Civil War in 1990 has seen some reports and complaints of ballot stuffing and ballot destruction, the matter has never escalated beyond a district-level concern. Come May 15, it could become a national nightmare.

Boycotts – including among some in the ruling establishment like the Sunni leader and former Prime Minister Saad Hariri – also stand to further undermine both the confessional and national legitimacy of the elections. Already, a number of anti-establishment figures have decided to reject the polls, believing there is no way to achieve any progress through the means of the ballot box. Worryingly, this minority may quickly turn into a majority in the coming weeks, as more and more anti-establishment leaders realize that their own professed beliefs about the nefariousness of the ruling establishment simply don’t comport with holding a free and fair contest.

It is, however, outside powers that may have fired the fatal bullet in the head of Lebanon’s elections – especially Western countries, under the umbrella of publicly advocated for democracy, insisted that elections absolutely must be held on time. Despite decades’ worth of reports and specific recommendations on the many ways by which the country’s electoral systems need to be improved, little political capital has been utilized to prevent the demise of this crucial national institution. As but one of many examples, the European Union and the United States have still stubbornly refused to commit any funds or substantive support to the Supervisory Commission for Elections, tasked with independently overseeing the elections but which the ruling establishment prefers to keep underfunded and weak (the proposed budget for the 2022 elections is a mere $18 million, well below the $54 million spent on the less contentious 2018 elections).

Not surprisingly, the sentiment amongst Lebanese seems to be growing across the board that Western countries might like to see some limited internal changes to the ruling class in their favor – particularly those that harm the main object of their concern, Hezbollah – but are generally more comfortable with the so-called “devils they’ve known” and worked, both with and against, for decades.

Either way, the consequences of a stolen election will surely be destabilizing, both inside and potentially outside of Lebanon, with long-lasting, corrosive consequences. As the Lebanese are robbed of the ballot box as a means of peacefully channeling both rising anger and the urgent need for systemic change, it is hard to see how sustained, politically-rooted violence won’t result at some point, especially since the national army is so weak that it must rely on external donations for its own survival. At the very least, municipal and presidential elections that should take place in the months following the parliamentary ones would likely falter, as would the formation of a new government, thus exacerbating the governance vacuum at multiple levels.

There is, fortunately, still a limited window to reverse course. The first step, however, needs to come from those within Lebanon who say that they want change. Today, professed anti-establishment individuals, parties, and movements are fractious; these actors should unify at least in demanding that the current government immediately implements several small-scale but crucial reforms to ensure a free and fair election.

First and foremost, these demands should call for a strong, well-funded Supervisory Commission to monitor campaigning, potential intimidation, as well as the vote count itself. In order to ensure that political parties can’t track voters, an array of well-known administrative mechanisms should also be put in place, including limiting the number of ballot boxes at any one polling station (which makes it harder for parties to know how someone voted) and creating “megacenters” for people to vote near to where they live, rather than in faraway villages where their families originate from.

Still, with little hard power to realize such reforms, save possibly for the threat of an even wider domestic boycott, it is inevitably up to Western countries – and not local actors – to try to strike an international bargain that might save the elections they so desperately want to be held. To this end, a mutual ceasefire should be the focal point of the West’s efforts, brokered on ruling establishment fears, including among some traditional Western allies in Lebanon, of American, European, and Saudi subversion of the elections ostensibly in favor of challengers (many of whom actually come from within establishment circles). Thus, for example, in exchange for a swift implementation of long-delayed administrative reforms that could significantly improve the conduct of the elections, America, Europe and Saudi Arabia would instead commit to restraining their interventions for the time being and shift their focus from meddling in electoral politics to supporting and monitoring election-integrity processes.

Of course, even if this kind of a deal is struck, it certainly won’t put an end to outside interference or the long history of transgressions that have marred Lebanese polls for decades. And it may only end up bringing about a modest change in the old order. But that change, personified by new MPs with real organic support, would at least have a decent chance of taking root and starting the process of repairing the country’s badly damaged democracy.

Nicholas Noe is President of The Exchange Foundation and Editor-in-Chief of the Beirut-based news translation service Mideastwire.com. Follow him on Twitter @NoeNicholas.