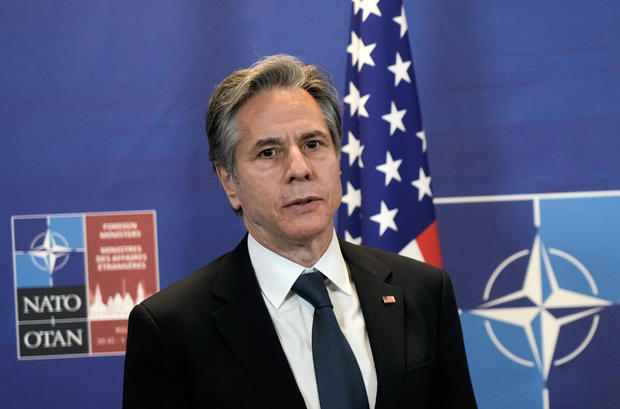 “It’s very hard to make actual progress” with Russia “in an atmosphere of escalation and threat with a gun pointed to Ukraine’s head,” U.S. Secretary of State Antony J. Blinken said ahead of the talks with his Russian counterpart and warned Russia against invasion of Ukraine . Jan 9, 2022
Share:

US Secretary of State Antony Blinken said he called off his meeting with Russian Foreign Minister Sergey Lavrov. The leaders were set to meet Thursday.

“Last week, I agreed to meet Russian Foreign Minister Sergey Lavrov this week, on Feb. 24, to discuss our country’s respective concerns about European security. But only if Russia did not invade Ukraine. Now that we see the invasion is beginning and Russia has made clear its wholesale rejection of diplomacy, it does not make sense to go forward with that meeting at this time. I consulted with our allies and partners. All agree. Today I sent Foreign Minister Lavrov a letter informing him of this,” Blinken said during a joint news conference with Ukrainian Foreign Minister Dmytro Kuleba.

US President Joe Biden and top US officials down said Tuesday that Putin’s moves marked the beginning of a new Russian invasion of Ukraine, and Biden announced a first tranche of sanctions in response.

Blinken said the US “remain committed to diplomacy if Russia is prepared to take demonstrable steps to provide the international community any degree of confidence that it’s serious about de-escalating and finding a diplomatic solution.”

The official noted that the US will proceed in coordination with its allies and partners “based on Russia’s actions and the facts on the ground.”

“But we will not allow Russia to claim the pretense of diplomacy at the same time it accelerates its march down the path of conflict and war,” he continued.

More background: Now that their meeting is off, the cancellation signals that the Biden administration no longer believes that Russia is at all serious about pursuing diplomacy.

French Foreign Minister Jean-Yves Le Drian also announced his meeting with Lavrov, that had been scheduled for Friday, was no longer occurring.

New Russia sanctions were “quite deliberate” to minimize disruption of US energy prices, official says

The Biden administration is focused on minimizing effects on domestic oil markets following a tranche of sanctions against Russia were announced Tuesday, with one senior administration official telling reporters the White House was “quite deliberate” in ensuring “the pain of our sanctions is targeted at the Russian economy, not ours.”

“None of the measures are designed to disrupt the flow of energy to global markets, and we are now executing a plan, in coordination with major oil consumers and oil producers, towards our collective interest to secure the stability of global energy supplies,” the official told reporters on a briefing call.

Biden acknowledged Americans might see rising costs at the pump in remarks earlier Tuesday, pledging his administration was using “every tool at our disposal” to prevent rising prices.

The official also pointed to the decision, overnight, to halt production of the Nord Stream 2 pipeline, which they called “Putin’s prized pipeline,” as evidence of emblematic of the severe cost to the Russian economy Monday’s actions provoked.

“[Putin] poured $11 billion into building the pipeline. It would have provided billions of dollars each year in revenues,” the official said. “That is now shut down, after very close consultations overnight with Germany.”

Still, the administration says, rising gas prices are not the direct result of the Nord Stream 2 pipeline decision, but over fears Putin might weaponize energy supply to “hold the world hostage.”

The official added that today’s decision serves to “reduce Europe’s addiction to Russian gas,” adding that the US will work in concert with allies to surge national gas supplies from other sources in an effort to address shortages.