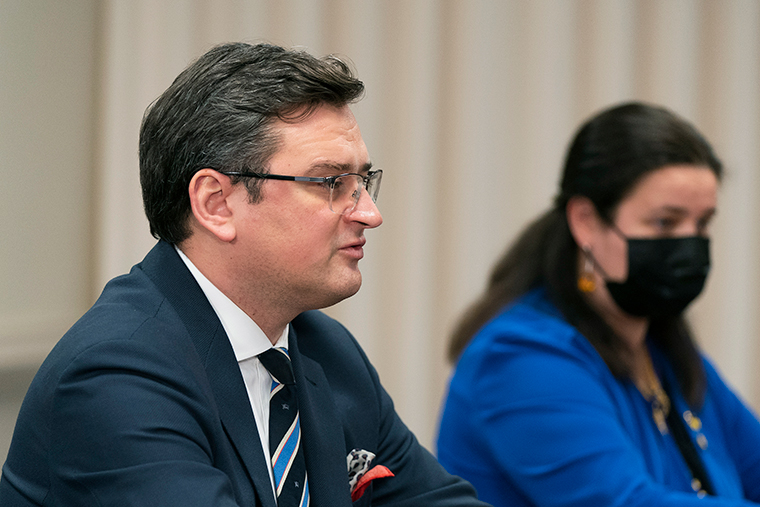 “The world must respond with all its economic might to punish Russia for the crimes it has already committed, and ahead of the crimes it plans to commit,” Kuleba said while speaking alongside US Secretary of State Antony Blinken at a joint press conference in Washington. “Hit Russia’s economy now and hit it hard,” he added.

While welcoming the latest US sanctions against Russia, Kuleba added that “Ukraine strongly believes the time for sanctions is now.”

“We are at a critical juncture for the security of Europe, as well as the international peace and security more broadly,” he continued.

On the topic of Moscow recognizing the independence of two pro-Russian separatist regions in eastern Ukraine, Kuleba said his country “does not and will never recognize this absurdity.”

Kuleba argued that what Putin “recognized is his direct responsibility for the war against Ukraine and an unprovoked and unjustified war on another sovereign state in Europe, which Russia now intensifies.”

Kuleba went on to blame Putin for “attacking the world order” with his latest actions.

Will fight for every inch

Earlier today Ukrainian Foreign Minister Dmytro Kuleba said that his nation has two plans: diplomacy, and if that fails, fighting to defend themselves.

“And if that fails, plan B is to fight for every inch of our land, in every city and every village – to fight until we win, of course,” he said.

Kuleba said Ukraine has no plans to evacuate Mariupol and Kharkiv in eastern Ukraine.