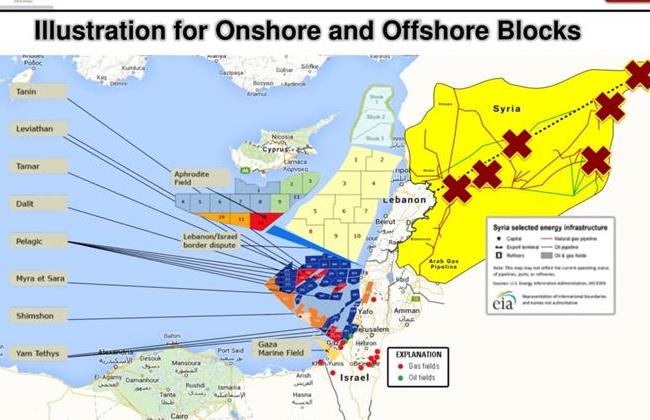 To drill or not to drill. This question is on the lips of energy officials and international oil companies as they watch with frustration Lebanon’s more than decade-long delay in issuing licenses to drill for oil and gas. The Iranian backed Hezbollah militant group and its ally the Amal movement have refused to take part in a panel formed by President Michel Aoun and Prime Minister Najib Mikati with the aim of studying the written proposal that has been sent to Lebanon by U.S. sea border demarcation envoy
Share:

BEIRUT: Lebanese President Michel Aoun said on Tuesday that “all the statements made about the indirect negotiation process with Israel on the concession in the maritime border dispute with Israel are not true. Those launching these claims are not aware of what happened during the discussions, which will preserve Lebanon’s rights and natural wealth, and that is what is important.”

His office refused to disclose any information relating to the talks, saying that “it must be strictly confidential because it relates to national security.”

The People Want Movement, an activist group, had requested information regarding the negotiation on the grounds that “when the ruling authority agrees to start negotiations with Israel accepting Line 23 as the new starting point for maritime border negotiations, it gives up 1,430 square kilometers of Lebanon’s right.”

The presidency dismissed the movement’s request for information, stressing that “the required information should not be disclosed as it deals with secrets of national defense, national security and public security.”

Dr. Issam Khalifa, a professor of history at the Lebanese University who has been researching for more than two decades the demarcation of Lebanon’s borders stressed that it is “important that the Lebanese delegation, negotiating indirectly Israel through a US mediation, adhere to Line 29 as the starting point for maritime border negotiations. This line represents the border between the two areas for Lebanon and Israel with the approval of the president,” he said.

“Line 23 is illegal. It means that Lebanon has abandoned 1,430 square kilometers, which is contrary to the interests of the Lebanese people,” Khalifa said.

Foreign Minister Abdullah Bou Habib said on Monday: “Lebanon received from the US mediator Amos Hochstein when he visited Lebanon on Feb. 8 an oral offer that I cannot disclose, but nothing is written or official yet.”

Ali Hamdan, adviser to Parliament Speaker Nabih Berri, said: “The result of the demarcation determines the line. It may be Line 23 or Line 29 or an area before or after these two lines. It is up to the demarcation process to determine that.

“In 2010-2011, the Lebanese government sent a letter to the UN spelling out Lebanon’s claim to the demarcation area based on Line 23,” Hamdan said.

Prime Minister Najib Mikati’s government sent in 2011 Decree No. 6433 to the UN, which adopts Line 23 for demarcating the maritime border with Israel.

The indirect negotiations, which took place in October 2020, were frozen by the Israeli side after the Lebanese delegation changed and increased its demands as negotiations began.

Hamdan expects the issue to be resolved within two months. He also expects the return of US mediator Hochstein to Lebanon within a month and a half.

“Hezbollah will accept the results, whatever they may be, if accepted by the Lebanese government, even on the basis of Line 23,” Hamdan noted.

The leaked information about Hochstein’s ideas indicates that “Lebanon could accept a zigzag line that would eliminate any partnership in the disputed fields between Lebanon and Israel.

According to this information, “the Qana field will belong to Lebanon in full, while the Karish field will belong to Israel in full, with proposals of the possibility of joint investment, whereas a giant company will invest in the disputed fields and agree to distribute the proceeds. However, the Lebanese side rejects any attempt that aims to normalize relations with Israel, which according to the Lebanese constitution, is an enemy.”

During his stay in Lebanon, the US mediator said that this opportunity will help Lebanon come out of its economic crises by extracting gas and oil, once the problem is resolved.