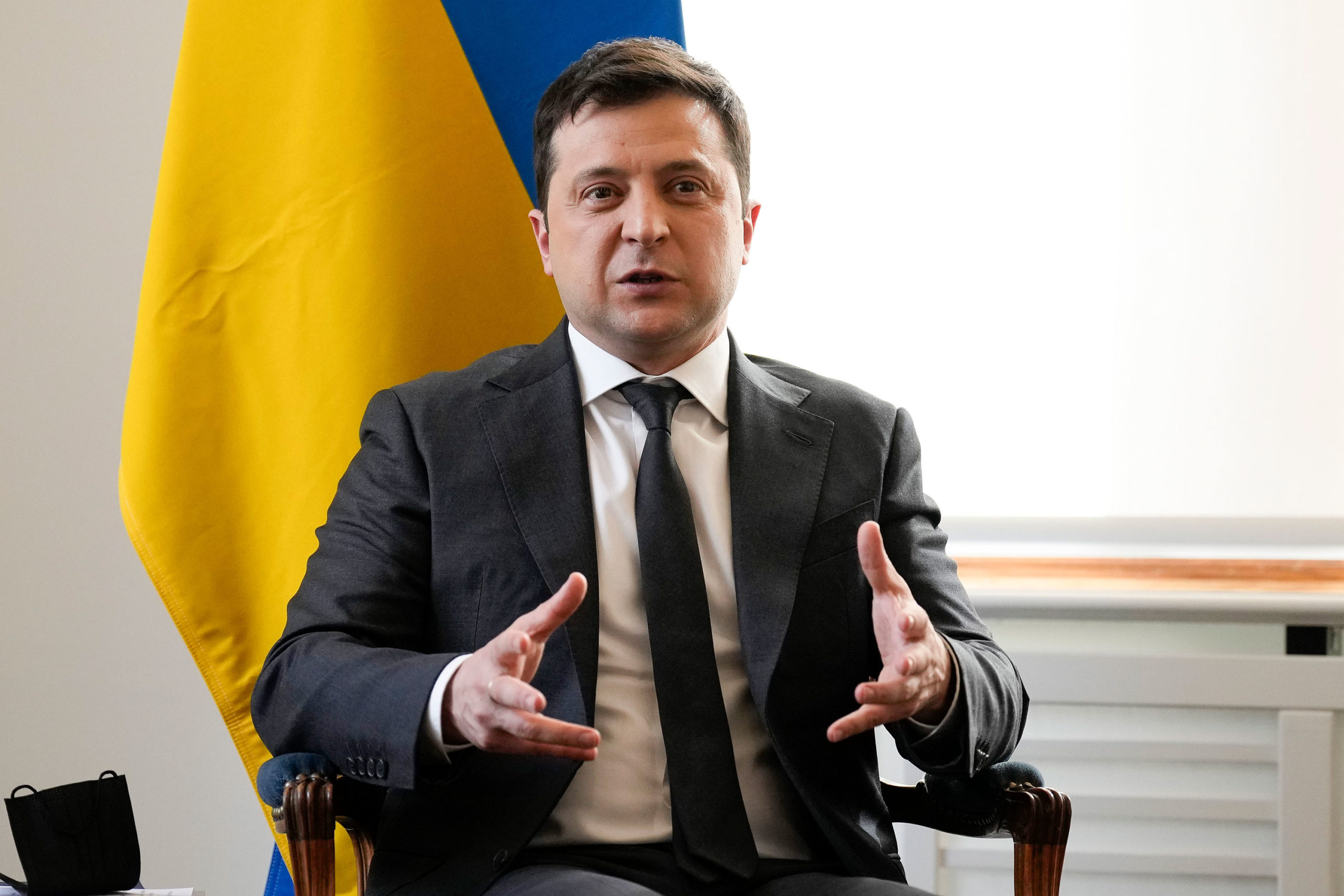 MUNICH, GERMANY – FEBRUARY 19: Ukrainian President Volodymyr Zelenskyy attends a meeting with British Prime Minister Boris Johnson (not pictured) at the 2022 Munich Security Conference on February 19, 2022 in Munich, Germany. The conference, which brings together security experts, politicians and people of influence from across the globe, is taking place as Russian troops stand amassed on the Russian, Belarusian and Crimean borders to Ukraine, causing international fears of an imminent military invasion. (Photo by Matt Dunham – Pool / Getty Images)
Share:

The EU urged Russia to de-escalate by substantially withdrawing military forces from near its border with Ukraine and highlighted the “increase in ceasefire violations” along the line of contact in eastern Ukraine in recent days.

“The EU condemns the use of heavy weaponry and indiscriminate shelling of civilian areas, which constitute a clear violation of the Minsk agreements and international humanitarian law,” read the statement from the EU’s high representative on Saturday.

The EU statement went on to commend Ukraine’s “posture of restraint in the face of continued provocations and efforts at destabilization” and expressed concern at “staged events” that it said could be used as a “pretext for a possible military escalation.”

This statement comes after Ukrainian officials raised concerns about expected “provocations” in breakaway regions in eastern Ukraine, saying they expect Russia to be involved in false-flag operations there.

On Friday, Oleksiy Danilov, secretary of Ukraine’s National Security and Defense Council, said the self-declared republics of Donetsk (DPR) and Luhansk (LPR) had alleged Ukrainian forces would launch an offensive against them – something Danilov called “completely untrue.”

Danilov was speaking soon after an explosion in Donetsk wrecked a vehicle close to the headquarters of the Donetsk People’s Republic. The cause of the blast was unclear.

“There is a great danger that the representatives of the Russian Federation who are there will provoke certain things. They can do things that have nothing to do with our military,” he said.

“We can’t say what exactly they are going to do, whether to blow up buses with people who are planned to be evacuated to the Rostov region, or to blow up houses, we don’t know,” he said, without providing any evidence of such plans.

Also on Friday, the foreign ministers of Germany and France said they do not see “any grounds” for DPR’s allegation, warning that “staged incidents could be misused as a pretext for possible military escalation.”

The EU also said it was witnessing intensified “information manipulation efforts” and expressed support for the Organization for Security and Co-operation in Europe’s Special Monitoring Mission, calling for the mission to be allowed to carry out its mandate without any restrictions.

“The EU sees no grounds for allegations coming from the non-governmental controlled areas of the Donetsk and Luhansk regions of a possible Ukrainian attack,” it said. “The EU urges Russia to engage in meaningful dialogue, diplomacy, show restraint and de-escalate.”

The self-declared republics are not recognized by any government, including Russia. The Ukrainian government refuses to talk directly with either separatist republic.

President Joe Biden is being briefed “regularly” on the situation in Ukraine by his national security team at the White House this weekend, press secretary Jen Psaki said in a statement.

“President Biden continues to monitor the evolving situation in Ukraine, and is being updated regularly about events on the ground by his national security team. They reaffirmed that Russia could launch an attack against Ukraine at any time,” Psaki said in the written statement.

Ukraine President Volodymyr Zelensky said he had an “urgent” conversation with French President Emmanuel Macron in which he discussed the “need and possible ways of immediate de-escalation,” as the US and allies insist Russia is moving to conduct an attack on Ukraine.

Ukrainian soldiers “ready for any scenario” The spirit is incredibly brave

A CNN team and other journalists accompanying Ukraine’s interior minister on a tour of the front lines in eastern Ukraine came under mortar fire Saturday.

No one was injured.

About a dozen mortar rounds landed within a few hundred meters of the group. Speaking to CNN prior to leaving the area, Monastyrskiy said, “We spoke with soldiers on the ground. The spirit is incredibly brave and all guys are ready for any scenario.”

He said that it had been his first time under fire. He told reporters that he was in the car en route and they had to stop every time they heard shelling and lay on the ground.

At a news conference later in Kramatorsk, Monastyrskiy was asked by CNN what role Ukraine believed that Russian military advisers were playing in the fighting in the eastern part of the country.

Some background: Wagner is a private Russian paramilitary force that has long been associated with the separatists in eastern Ukraine and has also deployed to Libya, Syria and the Central African Republic, among other countries.

Wagner Group may appear to be a conventional business company. However, its management and operations are deeply intertwined with the Russian military and intelligence community. The Russian government has found Wagner and other private military companies to be useful as a way to extend its influence overseas without the visibility and intrusiveness of state military forces. As a result, Wagner is considered a proxy organization of the Russian state rather than a private company selling services on the open market.

Over the past few days, the Ukrainian armed forces have reported a surge in heavy weapons fire against Ukrainian positions along what is known as the line of contact.

The Ukrainian Ministry of Defense said that through 17:00 local time (10 a.m. ET) Saturday, “70 violations of the ceasefire regime were recorded by the Russian occupation forces, 60 of which by using weapons prohibited by the Minsk agreements.”

The ministry also said that two Ukrainian serviceman were killed and four wounded on Saturday.

The Ukrainian Defense Minister Oleksiy Reznikov repeated in a Facebook post Saturday that Ukraine had no plans to launch an offensive against the breakaway regions, as claimed by the leaders of the self-declared Luhansk and Donetsk republics.

“We do not plan any offensives, but we will not allow the firing on the positions of our troops and human settlements with impunity,” Reznikov said.

A group of journalists, including from the French agency AFP and CNN, came under mortar fire Saturday when accompanying Ukraine’s interior minister on the frontlines.

The call between Zelensky and Macron comes ahead of an expected conversation Sunday between Macron and Russian President Vladimir Putin.

“Macron has become Putin’s most frequent person to have conversation with in recent days (in recent times). The leaders of Russia and France will talk by phone over the weekend,” Ria Novosti said in a tweet.