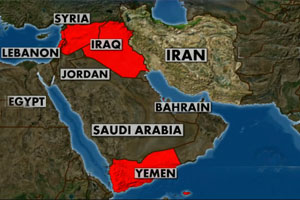 The Iran nuclear deal has troubling aspects for neighboring countries if sanctions are waived . Iran can keep developing missiles and will not be required to abate its interference in the Middle East, where it supports militias that dominate Iraq , Lebanon and Syria. It also supports a rebellion in Yemen where the rebels have launched frequent attacks on Saudi Arabia and provides crucial ground forces to back the murderous government of Syria. And it will not renounce its declared objective of destroying Israel. The freedom from sanctions will give it the resources to intensify these ongoing aggressions.
Share:

BY: BY THE EDITORIAL STAFF OF THE POST AND COURIER

President Joe Biden is soon expected to strike a revised nuclear deal with Iran that would delay, but not eliminate, the malevolent regional power’s ability to develop nuclear weapons. Iran gained a good deal of nuclear knowledge since the U.S. pulled out of the 2015 deal, which also had its weaknesses, and this dubious new pact would leave Iran even closer to building the bomb it covets. Mr. Biden and his negotiators need to push for a stronger, more comprehensive agreement.

Sanctions hampering Iran’s economy would be lifted as part of the deal, according to The Wall Street Journal. In exchange, Iran would surrender its stockpile of enriched uranium but would retain the capability to make more, giving it the ability to amass enough nuclear fuel for a bomb in less than a year. And the agreed limits would expire in 2031. That is not an ideal scenario.

The deal has other troubling aspects for neighboring countries. Iran can keep developing missiles and will not be required to abate its interference in the Middle East, where it supports militias that dominate Iraq and Lebanon. It also supports a rebellion in Yemen where the rebels have launched frequent attacks on Saudi Arabia and provides crucial ground forces to back the murderous government of Syria. And it will not renounce its declared objective of destroying Israel. The freedom from sanctions will give it the resources to intensify these ongoing aggressions.

The United States has few attractive options. The deal’s shortcomings must be weighed against the likelihood that without any agreement, Iran could produce enough highly enriched nuclear material for a nuke within months. Iran has sworn it has no intention of doing so, but its continued efforts to enlarge its capacity to enrich uranium and develop long-range missiles make that promise hard to believe.

The central question is whether a weak agreement limiting Iran’s production of nuclear material for the next eight years — but not ruling out Iran’s abrogation of the agreement on short notice — is worth the predicable turmoil that Iran will be capable of mounting in the Middle East when its economy improves with the lifting of sanctions, and the increased threat to Israel and Saudi Arabia that will follow.

We think it is not. President Biden should stand firm and continue the sanctions then-President Donald Trump applied to Iran pending a comprehensive agreement curbing the full range of Iran’s threats.

Given our overwhelming nuclear superiority, there inevitably will be calls for taking a stronger U.S. military posture, including threats of a preemptive nuclear attack on Iran. But as Kevin D. Williamson observed this month in National Review, “there is a great deal of diplomatic territory between sanctions and bombs. Unfortunately, it requires sustained effort and offers very little near-term political reward.”

In our judgment it is best to keep up the pressure for better terms rather than getting into an ambiguous and easily abridged agreement on the production of nuclear material in exchange for freeing up the resources the Iranian military needs to expand its disruption of Middle East security.

Again, there are few alternatives. Israel already has said it will not be bound by any new international agreement with Iran, which raises the possibility of an Israeli attack and the ensuing disruption that could bring. The United States also might have to deploy military forces to protect military allies.

The Biden administration appears to take the position that it does not have to submit any new Iran agreement to the U.S. Senate, which has the constitutional duty to approve treaties binding the United States to international agreements. Were it to do so, there is a good chance that even a Senate narrowly controlled by Democrats would reject the deal as it has been described.

Earlier this month, the chairman of the Senate Foreign Relations Committee, Sen. Robert Menendez, D-N.J., raised concerns about the current round of negotiations. “At this point,” he said, “we seriously have to ask: What exactly are we trying to salvage?”

That question urgently needs to be answered.