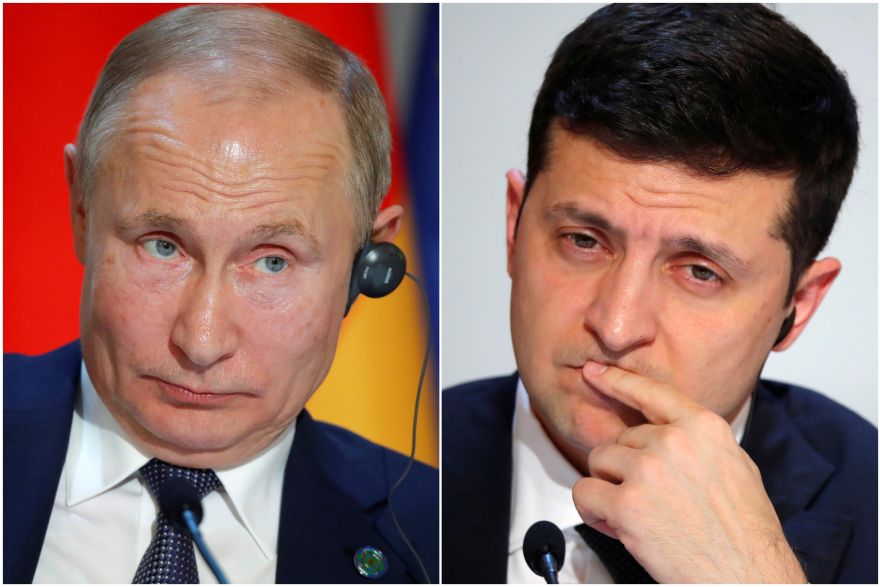 Ukrainian President Volodymyr Zelensky (R ) has shown himself to be resistant to the pressure he faces from Russian President Vladimir Putin ( L) — and from Europe, too.
Share:

With Russian warships and tanks encircling his country amid dire warnings from the United States about an impending invasion, Ukrainian President Volodymyr Zelensky has shown himself to be resistant to the pressure he faces from Russia — and from Europe, too.

On Friday, Zelensky’s aides returned home to Kyiv after facing off with Russian counterparts in Berlin during the latest round of talks, brokered by France and Germany, aimed at ending the separatist conflict in eastern Ukraine.

The highly technical discussions have limped along for years but took on new importance as U.S. and European officials have worked to defuse the wider Ukraine crisis resulting from Russia’s deployment of more than 130,000 troops near Ukraine’s border.

After nearly nine hours of talks this week, Ukrainian and Russian officials failed to make a breakthrough, agreeing only to continue the process and meet again at an unspecified time.

“The Ukrainians presented a very hard position,” said Russian envoy Dmitry Kozak, noting that it was impossible to reconcile conflicting interpretations of an accord, known as the Minsk agreements, designed to halt the fighting between Ukrainian forces and Russian-backed separatists.

“We did not manage to overcome this,” he added.

Ukraine’s envoy, Andriy Yermak, characterized his country’s approach as “constructive dialogue” and said that “everyone confirmed” the Minsk agreements must be fulfilled.

A key obstacle, according to diplomats familiar with the discussions, was Kyiv’s opposition to negotiating with the pro-Russian separatists with whom they’ve been in a deadly but low-intensity conflict for the past eight years. Fighting in the breakaway regions of Donetsk and Luhansk has continued despite a cease-fire agreement. Up to 14,000 people have been killed since violence broke out in 2014.

Kyiv and Moscow have accused each other of failing to implement the Minsk agreements. Ukraine views the accord as generally unfavorable to its interests and feels it was foisted upon the country’s leaders with little room for recourse. Russia has called on Ukraine to grant greater powers to the breakaway regions within Luhansk and Donetsk, an area known as the Donbas. Moscow holds that pro-Russian separatists should have a say, if not veto, over the policies of a Ukrainian federal government — a notion Kyiv opposes as it could preclude Ukraine from becoming a member of NATO or the European Union.

France and Germany have tried to resuscitate the agreements by encouraging Russia and Ukraine to comply with the terms they have not implemented.

For the Zelensky government, granting greater autonomy to the breakaway regions could require constitutional reforms that are deeply unpopular. Direct talks with the separatists, whom many Ukrainian officials consider “terrorists,” also are deeply controversial.

On Thursday, Kozak chided the Europeans for failing to bring Ukraine into compliance.

“My impression was that the Western diplomacy had no impact on the Ukrainian position in the talks,” Kozak said.

Like the Ukrainians, the French and the Germans do not recognize the separatists as legitimate, but as a starting point, are encouraging the Ukrainians to engage with working groups moderated by the Organization for Security and Cooperation in Europe that include some separatists, said European officials who spoke on the condition of anonymity to discuss sensitive negotiations.

Nikolaus von Twickel, a Berlin-based analyst who follows the breakaway territories closely, said the separatists are able to contribute some needed information about the conditions on the ground.

“When you need to know the exact distance from one object to another, or who mans the water filtration station in the morning — these are very practical, very important issues,” he said. “The Moscow representatives couldn’t possibly know this.”

Ukraine has signaled that it is willing to cooperate with a working group focused on humanitarian issues, but the failure to produce a joint document at the end of this week’s negotiations suggests Zelensky is holding out for better terms on a range of issues.

That resistance comes despite concerns that if talks fail, Russian President Vladimir Putin could walk away from diplomacy and order a military assault on Ukraine. But Zelensky has other matters to consider as well.

Zelensky could face stiff resistance in parliament to any deal seen as giving in to Russia’s demands, and which lays the groundwork for a state-within-the-state in Donbas run by Moscow’s proxies.

Even granting the breakaway regions some form of special status would be highly unpopular, deputies said, and members of Zelensky’s own Servant of the People party could refuse to back the president.

At the moment, no such proposal is being made, however, and deputies say they would need to see what was on the table before making their decision about how to vote.

“We need to know what kind of compromise might be,” said Volodymyr Ariev, a prominent deputy with former president Petro Poroshenko’s European Solidarity party, one of the main opposition parties in Ukraine. “For a bad scenario that would harm Ukraine’s sovereignty and jeopardize [the country] — I’m pretty sure there are no votes for that.”

The purpose of Russia’s interpretation of the Minsk agreements was to create a “Yalta Two” — or a division of Europe similar to what took place after World War II, Ariev said. He added that he was steadfastly opposed to a “Finlandization” of Ukraine, a reference to the neutral status of Finland during the Cold War that ensured its independence.

As the talks continue to stall and the threat of war grows more present, it’s unclear how much pressure the United States is placing on Ukraine to reach a compromise with Russia. French and German officials say they have the support of the United States, but a spokesperson with the National Security Council declined to offer specifics.

“We stand ready to support sincere efforts at progress from all sides — Ukraine, France and Germany, and Russia — to implement the Minsk agreements,” the spokesperson said.