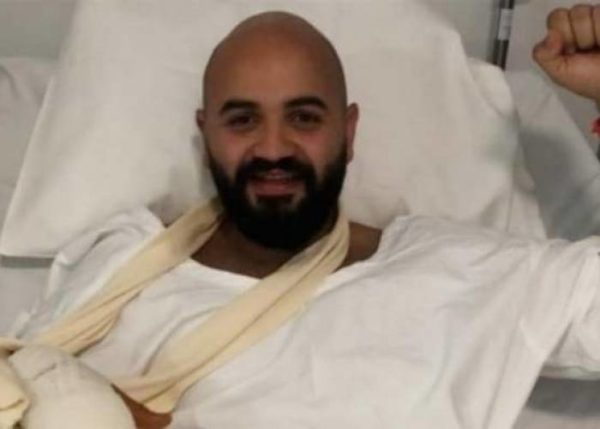 File photo of October 17 activist Michel Chamoun: He is shown at the hospital; with injured arm after the Internal Security raided his home on June 20 , 2020 and arrested him.
Share:

October 17 activist Michel Chamoun announced his candidacy for the upcoming elections on Sunday .

He wrote on his Facebook page : “After all that we have done from the night of October 17 to today, and because I decided to complete the convictions by representing many of the righteous, honest and revolutionaries in all of Lebanon, and because our presence on the street is no longer helpful it is time to focus on the upcoming elections to set an example for others in the new Parliament.” .

He added, “In my name and in the name of every human and revolutionary who refuses to surrender and insists on building a new Lebanon with his own hands! I announce my candidacy for the parliamentary elections for the Maronite seat in the Baabda district.”

Baabda district is in Mount Lebanon and it includes some parts of Beirut and the upper Metn region of Mount Lebanon.

As an activist Chamaon was targeted by the Internal Security forces

On June 20, the Lebanese security forces raided his home in his homtown of “Kfar Hbab” in Mount Lebanon

His arrest came after his publication of a video on his Facebook page, attacking the Hezbollah “Militia” chief “Hassan Nasrallah” and his ally, Syrian president “Bashar al-Assad”. accusing them of allegiance to Iran and acting as agents to it .

Nasrallah declared allegiance to Iran on more than one occasion

His arrest sparked a wave of anger and resentment within the Lebanese popular movement, and activists launched calls via social media for gatherings in preparation to go to the Grand Serail in Jounieh to demand his release.

The protesters expressed their indignation and anger at the “arbitrary arrests” that were taking place against the protesters over the deplorable living conditions.

The protesters described “Shamoun” as the voice of the desperate youth and mouthpiece of the poor people,