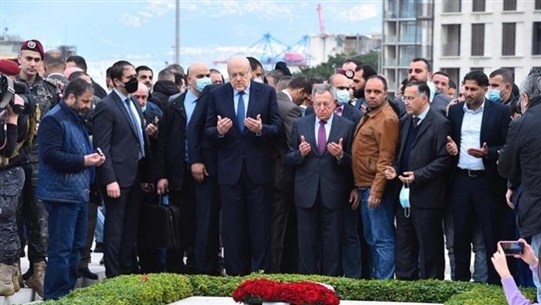 BEIRUT: Lebanon’s Grand Mufti Sheikh Abdel Latif Derian warned as Lebanon e commemorated the 17th anniversary of the assassination of late Prime Minister Rafic Hariri , that the country was once again “falling apart as if those in charge had not learned from previous experiences, which have cost the Lebanese their lives and livelihoods.”

His warning came as Lebanon prepares to commemorate the 17th anniversary of the assassination of late Prime Minister Rafic Hariri on Monday amid an ongoing political dispute, fueled by Hezbollah, over how the Cabinet will approve the 2022 draft budget.

The commemoration of Feb. 14 in Beirut is taking place amid uncertainty within the Future Movement after Sunni leader and former Prime Minister Saad Hariri announced his withdrawal from political life and asked his parliamentary bloc not to run for the upcoming parliamentary elections under the party’s name.

Hariri will thus participate in commemorating his father’s assassination without giving his usual speech.

“How long can the list of martyrs get? Lebanon itself has almost become a martyr,” Derian commented as he stood before the tomb.

He added: “Today, Lebanon is mired in moral corruption, political failure, and financial and economic collapse.

“Honoring the martyr Hariri lies in preserving his moral and national heritage and continuing public work in light of the constructive approach that he adopted throughout his career until his last breath.”

Also speaking before the tomb, former Prime Minister Fouad Siniora said: “The moment Hariri was assassinated on Feb. 14, 2005, the project to destroy the state was launched, aiming at creating multiple powers and disrupting the state’s pillars.

“The attempts to sabotage Lebanon’s parliamentary democratic system are ongoing, intending to change Lebanon’s identity and append it to the well-known regional project.”

“This is based on restoring the role of the state and extending its full authority over all its lands and facilities,” said Siniora, adding that there is a need to adopt reform policies and rely on Islamic-Christian coexistence.

Siniora stressed the importance of respecting the constitution and implementing the Taif Agreement to restore the national, economic and social wellbeing of Lebanon and the Lebanese.

Meanwhile, Hezbollah and the Amal Movement accused President Michel Aoun and Prime Minister Najib Mikati of “passing the budget in the last session without voting on it and making appointments that were not agreed upon.”

Culture Minister Mohammed Wissam Al-Murtada said: “The draft budget was still under discussion, but some proposed amendments and some figures had not yet been handed over to the ministers, despite our repeated requests.

“This means that the Cabinet did not conclude its discussion of the draft budget, did not vote on it, nor did it approve or reject it.”

Al-Murtada claimed that the appointments that were made were not on the Cabinet’s agenda.

“We objected, but suddenly and without a vote, and after the session was adjourned, we learned that the Cabinet had decided on the appointments.”

Ali Khreis, an MP with the Development and Liberation bloc headed by Parliament Speaker Nabih Berri, said that what happened “does not reflect any responsibility toward basic issues, and only reflects the reality of the law of the jungle and chaos.”

The recovery plan that the government is working on and the draft budget approved by the Cabinet face political and popular objections, mainly from Hezbollah and the Amal movement.

Activists staged a sit-in on Saturday evening near Mikati’s residence, expressing their anger at burdening the people.

The National Salvation Front said: “The ruling authority wants to place the losses of the economic and financial crisis on citizens’ shoulders in defense of the interests of its mafia-militia alliance, without taking any reform steps that help the country overcome the crisis.”

Addressing the Lebanese after approving the draft budget, Mikati said that “a correction has been made to taxes and fees based on the inflation occurring in the exchange rate,” meaning that the budget will adopt the price of an exchange platform in which the dollar exchange rate is equivalent to the black-market rate.

He noted that the economic recovery plan that was being worked on “is the basis for discussion with the (International Monetary Fund). We must set our priorities and carry out the required reforms.

Mikati added: “We can no longer provide electricity, telecom, and water for free, and citizens should be more understanding.”

The prime minister warned: “If we do not speed up reform, we may reach a point where we may no longer be able to import wheat. If the issue had been resolved a year ago, the fiscal deficit would have been around $40 billion, while today it is around $70 billion.”

The bishop said: “From where will citizens get the money to pay the expected price increases when they are barely able to feed their children?

“Are citizens responsible for the state’s collapse and bankruptcy and the Lebanese pound devaluation?

“Is it not the state’s duty to put an end to corruption in its institutions, control its borders, stop waste and smuggling, curb tax and customs evasion, close useless funds and unproductive councils, and collect their dues?”