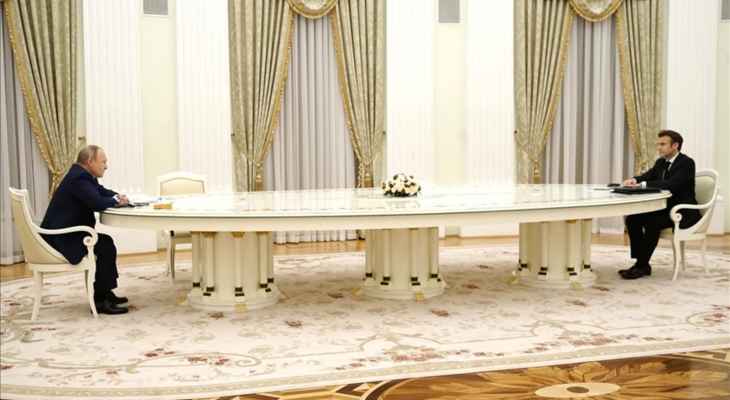 OVID-19 test ahead of his meeting with President Vladimir Putin (R) this week, with his aides citing concerns that he did not want Moscow to have access to his DNA. This is why they sat at both ends of a 20 ft table ( OVER 6 meters )
Share:

French President Emmanuel Macron reportedly refused to take a Russian COVID-19 test ahead of his meeting with President Vladimir Putin this week, with his aides citing concerns that he did not want Moscow to have access to his DNA.

Individuals with knowledge of the situation told Reuters that Macron was presented with the option to take a Russian PCR test or to follow more strict social distancing protocols if he refused ahead of a Monday meeting to discuss the swelling crisis surrounding Ukraine.

As a result of Macron declining the test, both leaders were sat at opposite ends of a 20-foot table during the meeting, an image that was widely shared on social media.

“We knew very well that meant no handshake and that long table. But we could not accept that they get their hands on the president’s DNA,” one of the sources told Reuters.

Another person confirmed to the news outlet that Macron took a French PCR test before he left France and had his own doctor give him an antigen test once he arrived in Russia.

“The Russians told us Putin needed to be kept in a strict health bubble,” the individual reportedly said.

In contrast to Macron’s meeting with Putin, Kazakhstani President Kassym-Jomart Tokayev visited Russia on Thursday where he sat close to Putin and shook his hand, Reuters noted.