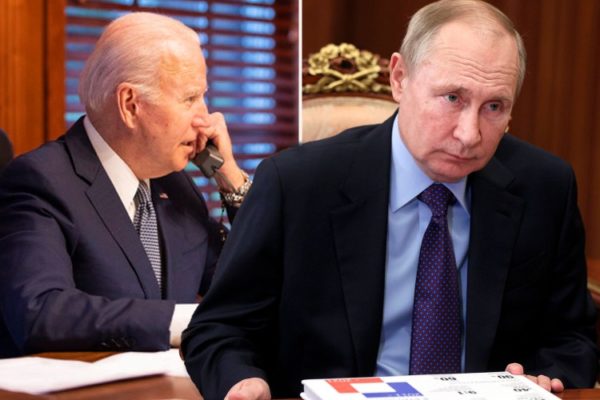 Composed file photo : US president Joe Biden and Russian president Vladimir Putin are due to speak Saturday morning, the first phone call between the two leaders since December 30, according to a White House official as Russian invasion of Ukraine appears imminent despite denials by the Kremlin
Share:

WASHINGTON – A Russian military invasion of Ukraine could happen before the end of the Beijing Winter Olympics, prompting a stark warning from the White House that Americans still in Ukraine should leave in the next 24 to 48 hours.

And Defense Secretary Lloyd Austin on Friday ordered the deployment of 3,000 additional troops to Poland as the crisis over Russia’s potential invasion of Ukraine deepened.

As the U.S. ratchets up warnings of a potential invasion, President Joe Biden will speak with Russian President Vladimir Putin Saturday morning on East Coast time, according to the White House.

U.S. National Security Adviser Jake Sullivan told reporters Friday while U.S. officials have not determined whether Putin has made a decision to launch an invasion, there is a “credible prospect” that a military action could occur before Feb. 20, when the Olympics conclude.

Sullivan reiterated a warning for U.S. citizens in Ukraine to leave within the next two days. He emphasized there is no plans for a U.S. military evacuation and that choosing to stay means they are assuming risk “with no guarantee that there will be any other opportunity to leave.”

“The risk is now high enough and the threat is immediate enough that prudence demands that it is the time to leave now,” he said.

He said an invasion could take a range of different forms, including an assault on the capital city of Kyiv or moving on other parts of Ukraine. Sullivan added that U.S. officials believe Moscow is looking to create a “false flag operation” as a pretext for a military action, but declined to provide intelligence showing evidence of such a plot.

Here’s the latest in the unfolding crisis in Ukraine:

Biden and Putin to speak Saturday

Biden and Putin are due to speak Saturday morning, the first phone call between the two leaders since December 30, according to a White House official.

Sullivan earlier told reporters he expected Biden to engage Putin by phone but officials declined to say when the call would take place.

Moscow proposed holding the call on Monday but U.S. officials countered with Saturday, which Russian officials accepted, the official said.

The president will speak with the Putin from the Camp David presidential retreat in Maryland, where he’s spending the weekend.

Austin on Friday ordered the deployment of 3,000 additional troops to Poland, part of the 82nd Airborne Infantry Brigade Combat Team based at Fort Bragg, N.C. About 1,700 of soldiers from that brigade already have been sent to Poland or are on their way. The entire brigade is now expected to be there by early next week to help shore up NATO’s eastern flank, according to a senior Defense Department official who was not authorized to speak publicly.

The deployments are meant to supplement the more than 80,000 U.S. troops already in Europe on rotational and permanent orders, the official said. On Feb. 2, the Pentagon announced that 2,000 troops based in the United States were being deployed to Europe and others already in German would be sent to Romania.

In late January, another 8,500 U.S. troops were put on heightened alert to support a quick-reaction force from NATO when, or if, it gets activated.

President Joe Biden held a call Friday morning with Transatlantic leaders on Russia’s military build-up around Ukraine, according to the White House.

The leaders discussed recent engagements with Russia and “expressed their desire for a diplomatic solution to the crisis,” according to a White House readout of the call.

“The leaders agreed on the importance of coordinated efforts to deter further Russian aggression against Ukraine, including their readiness to impose massive consequences and severe economic costs on Russia should it choose military escalation, and to continue reinforcing the defensive posture on NATO’s eastern flank,” the statement said.

White House press secretary Jen Psaki said she expects the president to engage closely with his national security team and European counterparts over the weekend during his visit to Camp David.

“We are making these decisions about who he’ll engage with on a day by day basis,” Psaki said.

He met with Russian Defense Minister Sergei Shoigu, who said “the military-political situation in Europe is growing increasingly tense, and not at our fault.”

Wallace described the talks as “constructive and frank” and said he received assurances that Russia has no plans to launch an invasion.

“I heard clearly from the Russian government that they had no intention of invading Ukraine,” Wallace told reporters in Moscow. “We will judge that statement on the evidence.”

Blinken’s comments followed a day of meetings in Melbourne, Australia, where he met with his counterparts from the Quad coalition countries of Australia, India and Japan.

Russian troops conducted military exercises and drills for a second day near Ukraine’s borders, a move that raised concerns about whether Moscow is moving forward with an invasion.

“As we’ve said before, we’re in a window when an invasion could begin at any time – and to be clear that includes during the Olympics,” Blinken said.

He said the U.S. continued to “draw down our embassy” and reiterated that any American citizens who are still in Ukraine should leave as soon as possible.

NATO Secretary-General Jens Stoltenberg arrived at a Romanian military base in the Black Sea region on Friday where he praised deployment of an additional 1,000 U.S. troops.

“This is a powerful demonstration of trans-Atlantic unity,” Stoltenberg said. “From here in the Black Sea region, all the way to the Baltic, allies are stepping up to reinforce NATO’s presence at this critical time.“

Bulgaria, which neighbors Romania, was also due to receive Spanish jets as part of ongoing efforts to bolster additional forces and support in NATO’s eastern flank countries amid ongoing tensions.

The visit came as Moscow announced sweeping drills in the Black and Azov Seas in the coming days and closed large areas for commercial shipping, drawing a strong protest from Ukraine. Meanwhile, Russia and its ally Belarus are beginning 10 days of war games near Ukraine’s northern border, which includes drills using live ammunition.

“There is a risk for a full-fledged invasion,” Stoltenberg said, but added other threats were lurking too, “including attempts to topple the government in Kyiv.”

Despite a string of meetings across Europe this week, diplomatic efforts to de-escalate the standoff remain at a stalemate. Officials from Ukraine and Russia, along with France and Germany, held talks in Berlin Friday but the meeting failed to show any signs of a breakthrough.

A 2015 peace deal brokered by France and Germany in a similar so-called Normandy format helped halt large-scale battles in the wake of the 2014 Russian invasion of the Crimean Peninsula, but regular skirmishes have continued. The Kremlin has accused Kyiv of sabotaging the agreement, and Ukrainian officials argued in recent weeks that implementing it would hurt their country.

Biden repeated a warning for Americans still in Ukraine to leave as soon as possible.

He said Thursday he has no plans to send troops into Ukraine to rescue U.S. citizens in the event of a Russian invasion, saying Americans and Russians shooting at each other would amount to a “world war.”

“It’s not like we’re dealing with a terrorist organization. We’re dealing with one of the largest armies in the world. It’s a very different situation and things could go crazy quickly,” Biden said in an interview with NBC Nightly News’ Lester Holt.

Asked if there was a scenario in which he would deploy troops to help evacuate Americans, Biden said: “There’s not. That’s a world war when Americans and Russia start shooting at one another.”

The president repeated a warning for Americans still in Ukraine to leave now, adding: “We’re in a very different world than we’ve ever been.”

More than 100,000 Russian troops have massed along the Ukrainian border, stoking fears that an incursion could come at any time. Russian President Vladimir Putin has said he has no plans to invade Ukraine, but his forces continue to conduct military drills along the border. NATO allies have responded by shoring up military support along the eastern flank.

Biden said he has told Putin that any action that would affect Americans would escalate the already tense stand-off.

‘I’m hoping that, if in fact he’s foolish enough to go in, he’s smart enough not to … do anything that would negatively impact on American citizens,” Biden said.

Asked if he’s told Putin that Americans would be a red line, Biden responded: “I didn’t have to tell him that. I’ve spoken about that. He knows that,” he said.