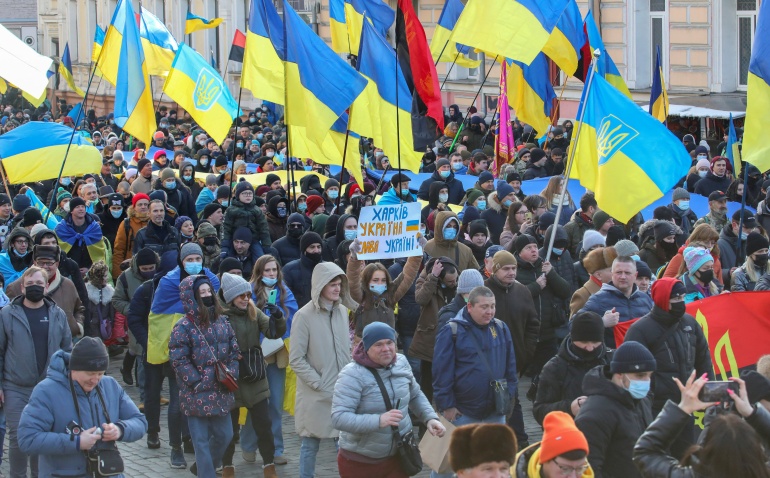 Thousands took to the streets in Kharkiv, Ukraine, in a procession to demonstrate the patriotic spirit of local residents amid growing tensions with Russia [Vyacheslav Madiyevskyy/Reuters]
Share:

Thousands march through the city chanting ‘Kharkiv is Ukraine’, in show of solidarity with country. Kharkiv, also known as Kharkov, is the second-largest city and municipality in Ukraine. Located in the northeast of the country near the borders , it is the largest city of the historic Slobozhanshchyna region.

Thousands have taken to the streets of Ukraine‘s second-largest city carrying banners reading “Kharkiv is Ukraine” and “stop Russian aggression“, as the country braces for a possible military offensive from Russia.

Weeks of diplomacy between the West and Moscow have produced no breakthrough after Russia massed tens of thousands of troops near Ukraine’s borders.

Moscow denies it plans to attack Ukraine but has demanded security guarantees, including a block on Ukraine joining the NATO alliance.

Kharkiv, an eastern industrial city that lies 42km (26 miles) from the Russian border, was identified by Ukrainian President Volodymyr Zelenskyy as a possible Russian target for “occupation” if the situation escalates, though his spokesman later said he was speaking hypothetically.

On Saturday, demonstrators in Kharkiv marched between the city’s two main squares in sub-zero temperatures. They sang the national anthem and waved Ukrainian flags, or held up flags of allies who have supported Kyiv, including the United States, the United Kingdom and the European Union.

“The people came into the streets to demonstrate that Kharkiv is a Ukrainian city and we will not surrender it,” Kharkiv resident Nina Kvitko told the Reuters news agency.

A Ukrainian flag wrapped around her shoulders, pensioner Iryna Gayeva had a simple message as she demonstrated.

“We do not want Russia,” she told the AFP news agency.  “I was born in Crimea. That’s enough, they’ve already taken a homeland from me. I grew up here, I live here, my parents are from Russia but I don’t want to see any occupiers,” she said.

“This is my home, these are my rules.”

Russia seized the Crimea peninsula in 2014 and began fuelling a separatist conflict in eastern Ukraine.

In 2014, as Russian-backed separatists took over two other eastern cities of Donetsk and Lugansk, fears swirled that Kharkiv could be the next domino to fall.

Pro-Moscow protesters attacked the regional administration with Molotov cocktails, as violence broke out with Ukrainian activists.

Eventually, Ukrainian forces managed to stop Kharkiv from slipping from Kyiv’s grasp, saving it from getting engulfed in a conflict that has cost 13,000 lives over the past eight years.

And now, those demonstrating insist that Russian forces would not be welcome in Kharkiv as Ukrainian patriotism has rocketed.

At her side, Nadia Rynguina is even more categorical.

“The situation has changed, we have an army worthy of the name, we have citizens ready to defend the country,” she said.

In the event of an intervention, Yury Shmylyov, 79, warned that “it will not be a walk in the park” for the Russian army.

“In 2014, we were afraid to display a blue and yellow flag here, but now look,” he said, pointing at the gathered crowd.

Galyna Kuts, a political scientist in Kharkiv and a member of the regional legislature, said Zelenskyy’s warning of potential “occupation” set nerves jangling.

“Everyone was calling each other to ask what to do, where to flee,” she said as she attended the rally.

But after years “living under constant threat of invasion”, she insists residents in Kharkiv have steeled themselves for anything.

“People have changed, they know how to survive,” she said.

Oleksandr Gerasimov has filled up his tank and is ready to evacuate his family if necessary.

But the 39-year-old demonstrator insisted he is “calm” as he does not believe Moscow will risk an attack against Ukraine’s bolstered armed forces.