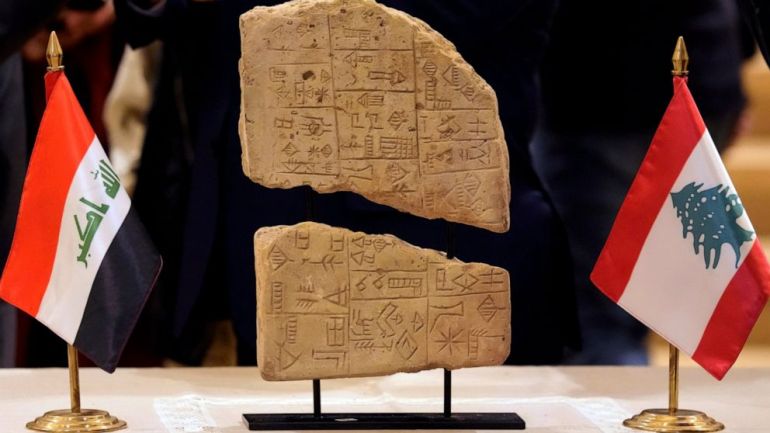 Lebanon’s Ministry of Culture on Sunday handed over to Iraq 337 ancient artifacts that had been on display in a private Lebanese museum for years
Share:

BEIRUT — Lebanon’s Ministry of Culture on Sunday handed over to Iraq 337 ancient artifacts that had been on display in a private Lebanese museum for years, the National News Agency (NNA) reported.

“We are celebrating the handing over of 337 artifacts that are of different eras of civilizations in Mesopotamia,” Al-Barrak said at the ceremony.

Many of Iraq’s antiquities were smuggled abroad during decades of war in the country.
“An agreement was reached between the Lebanese Nabu Museum, in which the artifacts are located, and the Iraqi government, which includes the delivery of these pieces to Iraq,” Murtada told Iraqi state media on Saturday.

Murtada also revealed that some of the antiquities being delivered were discovered to be of Iraqi origin by the Lebanese Directorate General of Antiquities as far back as 2018.

“The number of pieces that will be delivered to Iraq is 331 pieces with cuneiform, in addition to six other pieces that were among 32 disputed pieces,” continued the minister.

The handover comes two weeks after Iraq received five ancient artifacts from the US, two of which are nearly 3,000 years old.

Around 17,000 antique artifacts have been returned to Iraq from the US since July, most of which date back to the Sumerian period around 4,000 years ago, one of the oldest civilizations in Mesopotamia.