Hezbollah confirms alliance with Amal, FPM in polls, says results won’t be the the end of the world 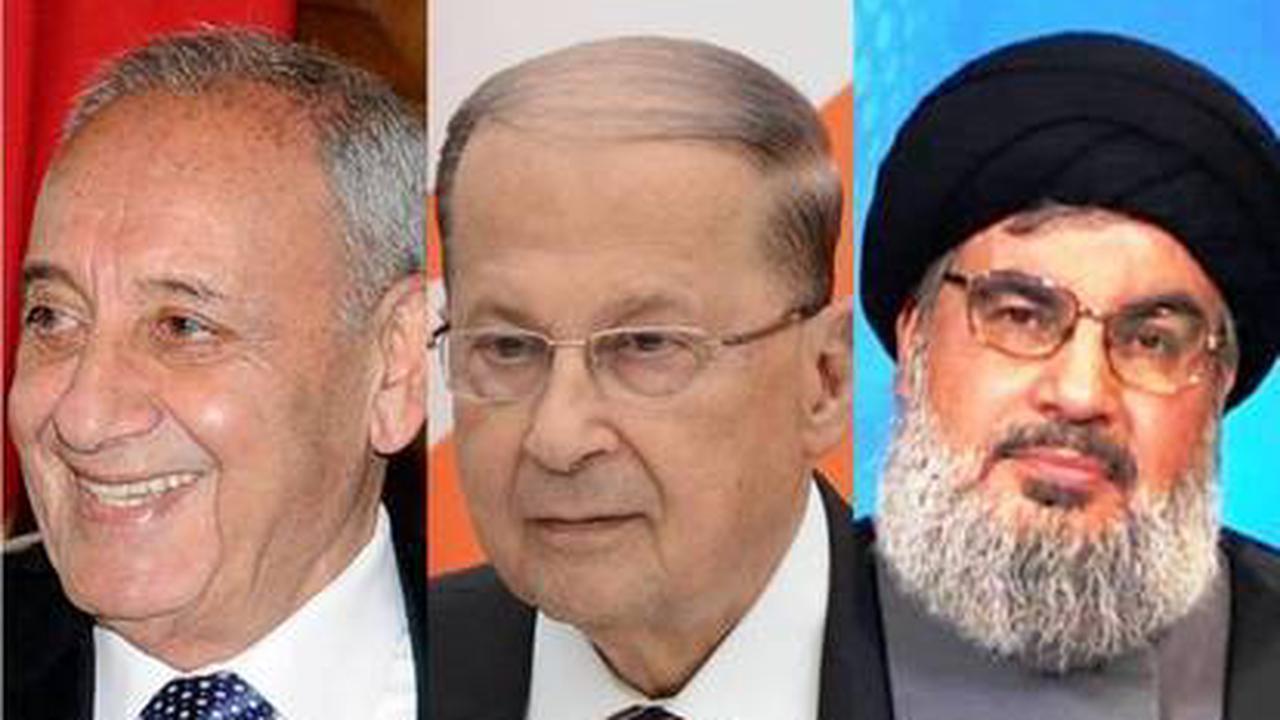 Combined file photo of Amal Movement leader Speaker Nabih Berri, (L) Hezbollah chief Hassan Nasrallah ( R) , Free Patriotic Movement ( FPM) founder president Michel Aoun .FPM’s current leader is Aoun’s son-in-law Gebran Bassil , who aspires to replace his father-in-law and at the same time concerned over losing many seats in the upcoming elections . Bassil is by far the most despised politician in Lebanon to the extent that during the 2019 protests a popular song directed against him became the symbolic hymn of the revolution
Share:

MP Hassan Ezz El-Din , a member of Hezbollah parliamentary declared on Saturday: “We are allied with the brothers in the Amal Movement and the Free Patriotic Movement, in a way that achieves the national interest in Lebanon and the interest of our members and people.”

During a political meeting organized by “Hezbollah” in the Imam Hussein complex in the town of Anqoun, Ezz El-Din touched on the issue of the budget, saying that “this budget is inevitable, because everyone knows that the state is stumbling, and this is a result of the collapse of the state, and this collapse led to the failure of the institutions in managing people’s affairs,” noting that “the budget comes if they want to pass it through the necessity that it be for the sake of managing people’s affairs. The Lebanese, especially since the salaries are limited and not sufficient to secure the minimum level of national dignity. He stressed that “if they try to pass anything that harms the citizen, we, through Parliament, will defend this issue.”

Regarding the electoral issue, Ezz El-Din said : “These elections are important , and y the Americans, Saudis the, French and their local allies beting on them ” He believed that “this entitlement is a natural entitlement and we will fight it, but its results will not be the end of the world.”

Hezbollah was created by the Iranian Revolutionary Guard in 1982 and has been funding, arming and training it ever since.

The only banks that dispense US dollars in Lebanon are Hezbollah’s . All the others froze the accounts of depositors.

Lebanon defaulted on its sovereign debt in 2020, a first in its history.

Its currency has lost about 90 percent of its value on the black market and four out of five Lebanese now live below the poverty line, according to the United Nations, a situation made worse by triple-digit inflation.

70 % of the losses incurred in Lebanon as a result of the corruption of the ruling class will be charged against the accounts of the depositors , the Lebanese banks will cover 16 % and the government will cover the balance

The basic rule worldwide, is the state first takes responsibility, then the banks and lastly the depositors, the Vatican envoy who visited Lebanon last week said .

The Lebanese people are extremely concerned about the budget that PM Najib Mikati is planning to submit to IMF in order to secure its help , after the World Bank accused Lebanon’s political rulers and the financial elite of “orchestrating a deliberate depression” by exploiting their grip on economic resources and “threatening the country’s long-term stability and social peace.”

Hezbollah is the only militia in Lebanon that refused to hand over its arms to the army . Its arms are now being used to protect the ruling elite .

Free Patriotic Movement ( FPM) founder, president Michel Aoun returned from exile , weeks after former PM Rafik Hariri was assassinated in 2005 . During his exile in France Aoun was very outspoken against Hezbollah, Syria and Iran but after he returned to Lebanon he signed a deal with Hezbollah that gave Hezbollah a Christian cover for its in Lebanon and the region activities and in return got him the presidency .