3 children killed as temperatures plummet in Syria, Lebanon and Jordan 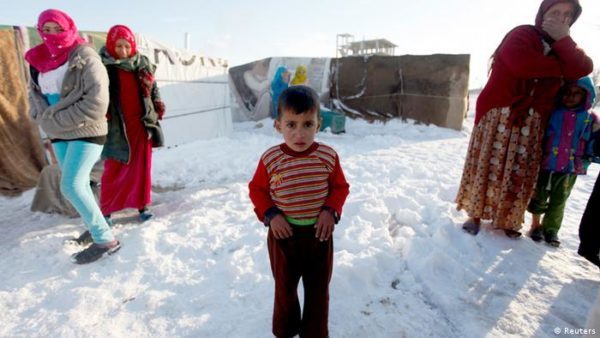 The humanitarian organization “CARE” revealed that three Syrian children were killed, while hundreds of thousands of people were at “great danger” in the wake of severe winter storms that hit Syria and neighboring countries, Lebanon and Jordan . Severe winters lead to an agreement
Share:

(CNN)Three Syrian children have died, with hundreds of thousands of people “at great risk” following heavy winter storms in Syria and neighboring countries, according to humanitarian organization CARE.

CARE warned in a Tuesday report that the onslaught of heavy winter storms is exacerbating the living situation of internally displaced Syrians, as well as Syrians living in Lebanon and Jordan, where “temperatures are expected to drop lower than they have in 40 years, reaching -14 degrees Celsius (6.8 Fahrenheit) and lower.”

Winter storms have damaged 362 tents and affected 2,124 displaced Syrians who live in camps in Syria, according to the United Nations Office for the Coordination of Humanitarian Affairs (OCHA) in Turkey.

One child died in a camp in Qastal Miqdad, Syria, when a tent he was in collapsed due to the accumulation of snow on its roof. The child’s mother is reportedly in the intensive care unit, OCHA said.

A 3-year-old and a 5-year-old child died on Monday morning in a camp north of Aleppo, Syria, when a fire broke out in their tent caused by a heater. The mother of the two children was injured with serious burns and taken to the hospital, according to White Helmets, a group of volunteer rescue workers in Syria who responded to the incident.

The cold weather resulted in severe body temperature drops of two children in camps in Bulbul, Syria. Both children are receiving treatment at a hospital in Afrin, Syria, OCHA said.

“This is yet another blow to people whose lives are already beyond unbearable. People can see their own breath when lying on their thin mattresses; you will see children walk around in flip-flops and ripped shirts. Families are afraid that they will freeze to death,” said Jolien Veldwijk, CARE’s Syria country director.

Crisis in a crisis

Syria’s civil war in 2011 began with the arrests of a handful of children during Arab Spring protests in March 2011. Since then, it’s exploded into a humanitarian crisis, leaving more than than 350,000 people dead and forcing millions — nearly half the population — out of their homes.

Over 6.7 million people have been internally displaced in Syria, according to the United Nations High Commissioner for Refugees (UNHCR). Another 6.8 million live as refugees in neighboring countries such as Jordan, Lebanon and Turkey.

Many of the displaced have found shelter in unfinished buildings, sheds, informal settlements and tents, which lack adequate protections and exposes them to brutal winter conditions, CARE said. This week’s bad weather is just worsening those living conditions.

In Lebanon, refugees live across a sprawl of informal settlements, where they lack protection from the elements, CARE said.

“People don’t have jobs or incomes, no access to jobs. They are already suffering consequences of an unprecedented economic crisis in Lebanon and have no means to protect themselves against the expected snowstorms,” says Bujar Hoxha, CARE Lebanon country director.

Veldwijik said that “while snowfall and subzero temperatures are not unusual in the Middle East,” climate change is playing a part, and is causing increasing flooding and rain.

“Flash floods are simply washing away the tents and the few belongings people were able to take when their houses were bombed. The winters are getting harsher and deadlier, while families are less and less able to cope with freezing temperatures,” Veldwijik said.