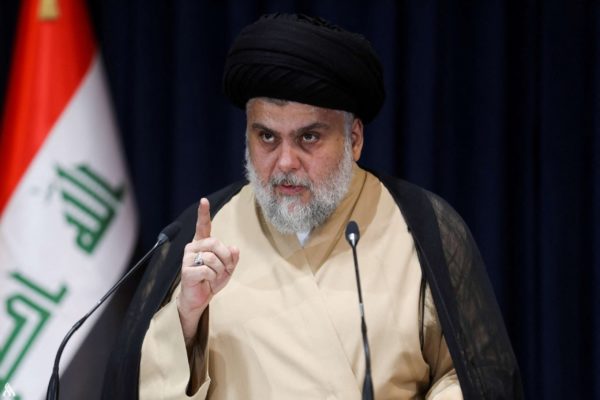 Two injuries and material damage were reported after blasts hit the Baghdad headquarters of parties allied to the Sadrist Movement, Friday and Thursday, in incidents where analysts saw clear warnings from Iran backed Shiite militias to rival Shiite cleric Muqtada al-Sadr that he will not be able to form a government without their consent or rule at their expense.

There was no claim of responsibility but a source in the Baghdad police told Anadolu Agency that “unidentified gunmen targeted the building of Taqaddom Coalition”, headed by Parliament Speaker Mohammad al-Halbousi, in the Adhamiyah neighborhood, in northern Baghdad.

Iraq’s parliament, newly elected after an October 10 general election in which the powerful Shiite populist cleric Moqtada al-Sadr was the biggest winner, voted to reinstate Halbousi for his second term as speaker on Sunday, against the wishes of the Iran backed parties

Similar blasts targeted a building of Azm Alliance, headed by Sunni leader Khamis Khanjar, in Baghdad. Another explosion hit a buildng near the the Kurdistan Democratic Party (KDP), another ally of the Sadrist Movement.

Besides the reported injuries, the targeted buildings sustained damages.

During the last elections, the Sadrist  Movement won about a fifth of the seats, 73 out of the legislature’s total 329, while the heavily armed Fatah (Conquest) Alliance, the political arm of the pro-Iranian Hashed al-Shaabi militia , won only 17 seats, sharply down from the 48 seats the used to control in the outgoing assembly.

Iraqi affairs experts say the Alliance Framework parties are wary of Sadr forming a new government excluding the pro-Iran Shiite forces and possibly attempting to fully integrate the Hashed Shaabi militias into the regular army or cut its funding.

Iraq’s post-election period since the October 10 vote has been marred by high tensions, violence and allegations of vote fraud, as pro-Iran political parties refused to concede their loss in the ballot to the Sadrist Movement.

Iraq’s top court, Thursday, provisionally suspended the newly-appointed speaker of parliament, while judges consider an appeal by two pro-Iranian party deputies claiming his re-election by other lawmakers was unconstitutional.

The move impacts the workings of parliament, as lawmakers cannot meet without the speaker.

One of the parliament’s first tasks must be to elect the country’s president, who will then name a prime minister tasked with forming a new government

Despite Halbousi’s suspension, the clock has not stopped ticking on the 30-day deadline to elect a new president that began at the parliament’s inaugural session, the court said.

In multi-confessional and multi-ethnic Iraq, the formation of governments has involved complex negotiations ever since the 2003 US-led invasion toppled President Saddam Hussein.

Moqtadar al-Sadr, the head of the winning formation that bears his name, has vowed to form “a majority government” instead of the traditional consensus-based cabinet.

Parliament only met Sunday for the first time in three months since the polls, where the new members held a swearing-in ceremony and elected the speaker.

It opened to furious arguments between rival factions of Shiite lawmakers as members of the pro-Iran Framework Alliance claimed to have enough seats to be the leading bloc in parliament. The Sadrists rejected their implausible claim.