Ukraine hit with massive cyberattack, a tactic “expected” to precede a “full invasion” by Russia 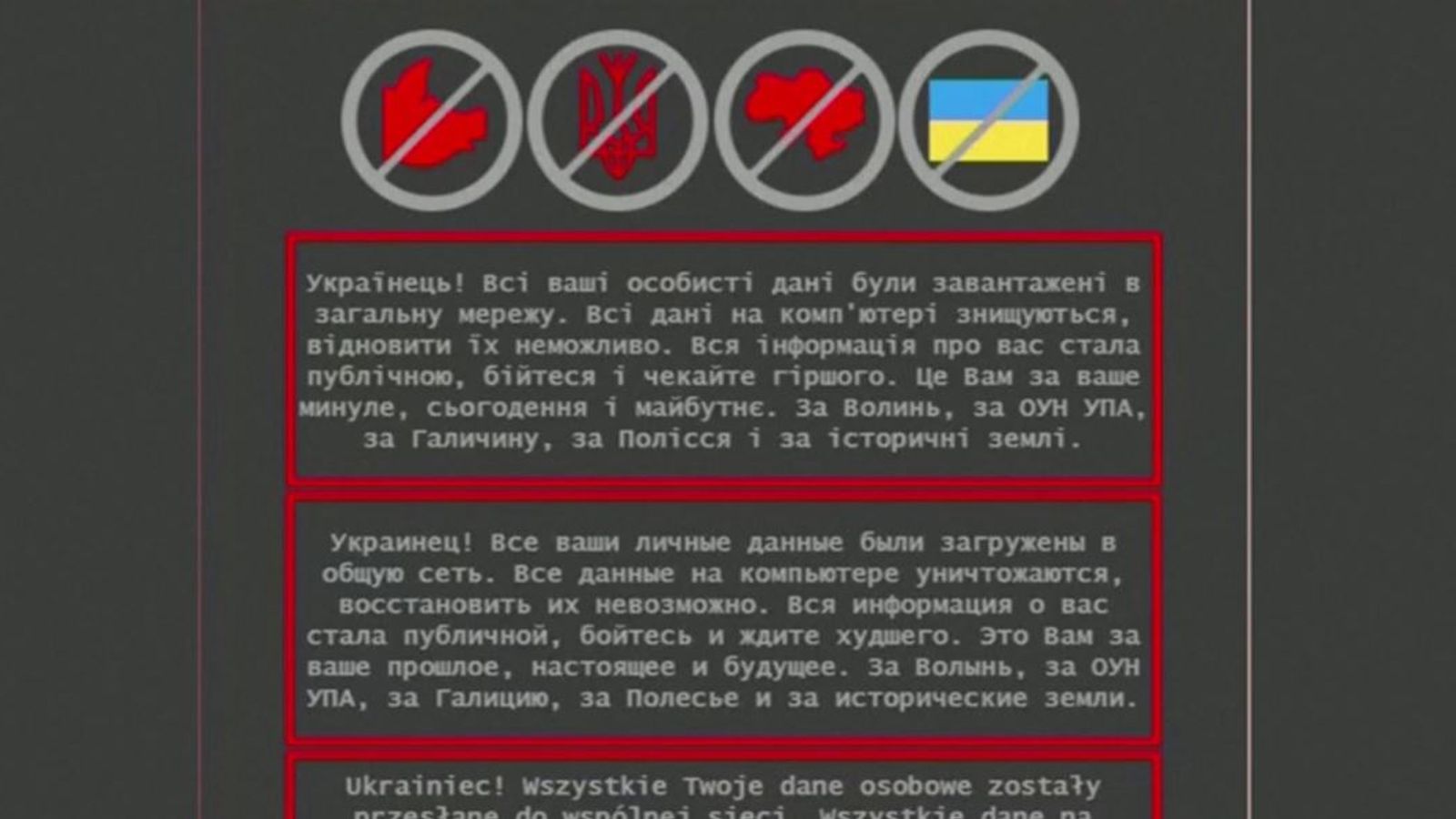 Ukrainian government servers were hit by a “massive cyberattack” overnight that saw government websites taken down, including the homepage for the Foreign Ministry, which temporarily displayed a message warning Ukraine’s people to “be afraid and expect the worst.”
Share:

Ukrainian government servers were hit by a “massive cyberattack” overnight that saw government websites taken down, including the homepage for the Foreign Ministry, which temporarily displayed a message warning Ukraine‘s people to “be afraid and expect the worst.”

Just hours before the latest digital sabotage, Ukraine’s ambassador in Washington told CBS News that her country believed a cyberattack would precede any major military action by Vladimir Putin’s forces.

There was no claim of responsibility for the cyberattack, but Ukraine has blamed groups with links to the Russian government for similar previous sabotage.

“As a result of a massive cyberattack, the websites of the Ministry of Foreign Affairs and a number of other government agencies are temporarily down,” the Foreign Ministry said overnight. Earlier, the ministry’s website displayed a message in Ukrainian, Russian and Polish saying: “Ukrainians! All your personal data… have been deleted and are impossible to restore. All information about you has become public, be afraid and expect the worst.”

Ukrainian and U.S. officials told CBS News on Thursday that a potential military assault against Ukraine would not necessarily begin with Russian tanks rolling across the frozen border in the coming weeks. Alternate methods of attack, including airstrikes as well as a staged provocation that could originate from neighboring Belarus or other Russia-friendly territory in the region, were among the possibilities expected — along with a preceding cyberattack.

Putin’s preference for hybrid warfare is also particularly weighing on the minds of Ukrainian officials.

“If Russia decides on a full invasion, then we know that we should expect increased cyberattacks before that,” Ukrainian Ambassador to the U.S. Oksana Markarova told CBS News on Thursday.

Russian cyber offensives have been a near constant for years and they span a range of debilitating attacks on infrastructure, from disabling electric grids to active disinformation campaigns run by Russia aimed at turning the Ukrainian public against their own government. The ensuing confusion and division could prove useful to Russian interests

The assumption is that Russian President Vladimir Putin may attempt to use such tactics to predicate a military attack.

President Biden’s National Security Adviser Jake Sullivan alluded to U.S. intelligence about Russian sabotage during a briefing at the White House on Thursday.

“Our intelligence community has developed information, which has now been downgraded, that Russia is laying the groundwork to have the option of fabricating a pretext for an invasion — including through sabotage activities and information operations — by accusing Ukraine of preparing an imminent attack against Russian forces in eastern Ukraine,” Sullivan told reporters.

A National Security Council spokesperson did not elaborate when asked by CBS News about Sullivan’s comments.

On Friday, an NCS spokesperson told CBS News that President Biden had been briefed on the cyberattack, but that the council had not yet determined who was behind the sabotage.

The U.S. has sent cyber teams to Ukraine in recent weeks to help advise the country’s own security services, multiple sources confirmed to CBS News.

Cybersecurity expert Dmitri Alperovitch said he doubted that a cyber attack would be the primary method used in any Russian offensive, but rather that it would be used to ‘prepare the battlefield’. “I expect that kinetic actions will take precedence in the offensive but cyber attacks will be used for intelligence purposes,” Alperovitch told CBS.

The Pentagon declined to describe the extent of support being provided to Ukraine. “We have long supported Ukraine’s efforts to shore up cyber defenses and increase its cyber resiliency, but have nothing further to offer at this time,” a Pentagon spokesperson said in a statement emailed to CBS News.

Tensions between Russia and the West are sky-high, with 100,000 Russian forces massed along Ukraine’s eastern border and U.S. officials warning that Putin could order another invasion of the neighboring nation as soon as this month or February. War has raged in eastern Ukraine between the country’s forces and Russian-backed separatists since 2014, when Russia invaded and seized the Crimean Peninsula.

Moscow has sent mixed signals, insisting there are no plans to invade again, but showing no inclination to reduce its troop presence along the border and warning military action could be taken any time if the U.S. and its NATO allies refuse to make “security guarantees.” Chief among the demands from Moscow is that Ukraine’s bid to become a NATO member be blocked. The U.S. has dismissed that demand as a “non-starter.”

The Biden administration has also made clear that its preferred route of diplomacy cannot make headway unless there is a climate of de-escalation, with Russia returning troops to their barracks and becoming transparent about its military movements.

The risk of a full frontal military invasion still remains high, according to U.S. and Ukrainian officials. If Putin were to go ahead with a full invasion, using tanks during the frozen winter months of January and February, his forces would face a Ukrainian military armed with javelin missiles and other U.S.-provided weaponry, as well as a long battle frontier given Ukraine’s size. But, from Ukraine’s perspective, neither the risk of a military incursion nor Russia’s efforts to destabilize the country via other means are likely to fade with the spring thaw.

American diplomats, led by the State Department’s Wendy Sherman, continue to lead talks in an effort to persuade Putin to change his calculus. Thus far, the efforts have not led Russia to pullback. On Thursday, Putin’s government labeled the talks “unsuccessful,” and Friday Foreign Minister Sergey Lavrov doubled down on the Kremlin’s “red line” on Ukrainian NATO membership.

Lavrov said if the security talks with the West fail, Russia’s response could entail a deployment of military hardware. On Thursday, his deputy said Russia “won’t exclude” putting military hardware in Cuba or Venezuela.