Ties That Bind: How Rania takes the art of hand-knitting to new heights 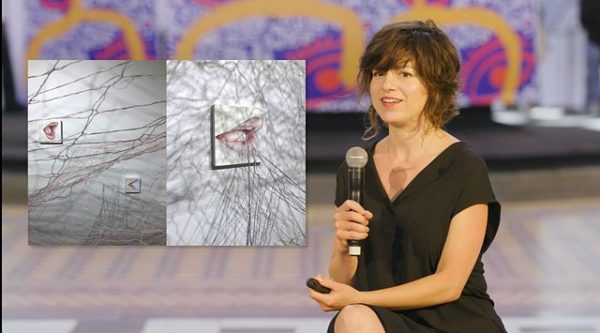 What I find really intriguing,” artist Rania Hassan says about her gracefully hand-knitted sculptures, “is that from a single thread, you can make anything. It doesn’t matter what that is, it’s one line of thread.”

Standing in her Washington row house on the main floor that often doubles as a studio, Hassan has assembled miniature models for her artworks, which may take shape in mammoth size. For an exhibit at Washington’s Kreeger Museum, the artist suspended a knitted web of gossamer-thin fibers in a stairwell between three floors. The piece, reaching 26 feet tall, required 40,000 stitches that Hassan knitted by hand. On site for the installation, she stretched and pivoted the airy artwork, securing it by fiber tendrils to the staircase’s solid bronze posts.

These artworks tie into Hassan’s underlying theme of a single thread that takes many forms while binding all parts together. “My work is about connections—how we’re all connected through community, time and memory,” she observes. Ideas about continuity and identity also weave through, the artist adds, since “the stitches we use have been used by so many generations before.”

Many have turned to knitting or crocheting as comforting activities during the pandemic. However, hand-knitting has ignited Hassan’s art for more than 15 years—and her connections to fiber go back even further. Born in New York to a family from Lebanon, the future artist watched as her grandmother crocheted intricate patterns for table coverings and other beautifully useful items. She learned to knit from her mother, who stitched and finished objects in impeccable floral motifs—all now treasured by the artist.

After graduating from the American University of Beirut in 1997, Hassan pursued oil painting. A few years after joining her family in Washington in 2000, she rediscovered knitting through friends and connected online to knitting communities around the world which, she remembers, “were an inspiration.”

Her artwork soon incorporated more than fiber. “I came to this as a painter,” she explains. “My work focused on connecting those two elements.” The dimensions of her art also expanded in response to commissions for specific sites. Her largest piece appeared in 2019 at the Smithsonian Arts and Industries Building. As serene and see-through as a waterfall, the refined, mesh-like installation descended 40 feet from black-steel trusses overhead. Called Paths VII, this elegant structure funneled down to a narrow spindle pendulum, its tip poised just above a rising mound of gold leaf. Typical of Hassan’s artworks, the sculpture was hand-knitted of natural fibers and metal filaments, some only one-eighth the thickness of a single hair.

“I’ve always used really fine threads you wouldn’t necessarily knit with,” the artist remarks, noting too that metals “add a bit of structure that helps them hold their shape and give a little sheen.”

In her DC studio, Hassan explains the process behind Liminality, her piece for the Kreeger. She pulls out a model of the staircase where her sculpture now resides. Dangling in the center, ordinary string represents her concept of “what that shape would look like and how the points would converge,” she says. The next step was a plastic-string version of the sculpture made with a 3D printing pen.

Later, paper cutouts helped Hassan determine that the flat, knitted piece would take the form of a circle with another half-circle on top, to be extended vertically. After knitting a swatch, she figured out the size of needles and the spacing of stitches.

“I scaled it up from there,” Hassan says, with an ease that belies the extensive calculations involved. After manually documenting the smallest edge (348 stitches) to the widest circumference (1,067 stitches), she produced a massive computer spreadsheet that she referenced while knitting to track every line.

“My work is very much about the calculations I use in my structures—they’re definitely more organic than the mathematics they come from,” the artist observes. She hopes viewers encountering her knitted sculptures experience the same surprise they feel when discovering “a cool spider’s web,” she says. “It has a big presence, but it’s so intricate and delicate that you have to be really paying attention to notice it. That’s how I think of my work.”

Rania Hassan’s Liminality is on view at the Kreeger through November 2021; kreegermuseum.org. Her steel Marker can be seen through Spring 2022 at Connecticut Avenue and K Street, NW. raniahassan.com