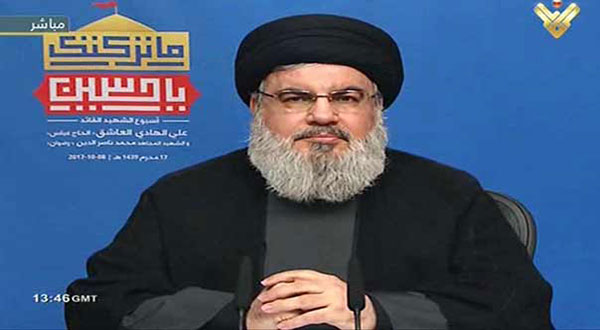 If Lebanon were a fragile, overcrowded and sinking boat, laden with desperate and starving refugees, making its precarious way across the ocean; then Hassan Nasrallah would be the psychopathic axman who, mid-voyage, frenziedly attempts to puncture the vessel’s hull and take everyone to the bottom of the ocean.

Lebanon’s steady demise over the past two years is largely the result of Hezbollah’s efforts to violently sever Lebanon from its Arab world life-support system. Lebanon is the most Arab of Arab states. What is Arab culture without Lebanese culture? Lebanese educational, literary, medical, musical, financial and scientific innovations have done so much to advance the region. Yet, without its Arab context, Lebanon is nothing.

In his latest speech, the telltale signs were in Nasrallah’s gleeful allusions to the outraged reactions he expected the speech to elicit — this calculated saboteur knew exactly what he was doing and the immense damage he would inflict.

His speech commenced with a celebratory eulogy for arch-terrorists Qassem Soleimani and Abu Mahdi Al-Muhandis, before resorting to tortured logic concerning why the Americans were responsible for the mass slaughter of hundreds of thousands of Syrians. Certainly, there were grizzled Hezbollah commanders in the front row of the audience thinking: “Hey, didn’t we take the credit for that?”

Then he worked himself up into a sweaty, angry stupor: “Your real enemy, the real dictator… the head of the aggression, the basis of the occupation, the nexus of corruption and oppression in our region, is the US. It is an enemy, so treat it like an enemy.”

And what should we do with the Americans? “Attack them, fight them, struggle against them by all means,” he said. Isn’t this an outright call for terrorism? Apparently not, because the leader of “Hezb Al-Shaitan” then began waving his fist and screaming at his audience about who the real terrorists are.

He directed his words against Gulf states, bellowing: “The terrorist is the one who sponsors all the factions of dissent and civil war in Lebanon… and that’s you.” This must have surprised the Gulf Cooperation Council states, who in recent years have actively distanced themselves from the Lebanese political quagmire.

Nasrallah’s infantile attempts to associate Daesh with Saudi Arabia are gravely offensive, given how deeply Saudi citizens have suffered from terrorism; not least the murderous 1996 terrorist bombing in Khobar — one of so many terrorist operations perpetrated by Iran and Hezbollah.

But perhaps the most inflammatory elements in Nasrallah’s dumpster fire of a speech were his calculated efforts to rip apart the Sunni-Shiite fault line throughout the region; the us-and-them logic, the “resistance” versus moderate states that aren’t dedicated to militancy, strife and terrorism.

With Nasrallah’s speech precipitating an immediate plunge in the value of the country’s reeling currency, Lebanese businessmen, workers and farmers heard it and wept. They continue to endure the economic pain after Gulf states boycotted Lebanese exports because Hezbollah exploited them to smuggle narcotics. They experienced the consequences of an insignificant former minister making ridiculous comments about Yemen, which were not even a thousandth as offensive as Nasrallah’s rhetorical firebombs.

Lebanon’s economic ruination has been exacerbated 100 times over by Hezbollah and its allies’ refusal to relinquish their stranglehold on the state so that donors and technocrats can come to the rescue. Hundreds of thousands of Lebanese workers across the Gulf fear the consequences of a collapse in relations. Nasrallah improbably describes these expats as being held “hostage” by Gulf states, ignoring the bitter irony of Lebanon being held hostage to Tehran’s hostile agenda.

These are the same professionals whose billions of dollars in remittances facilitated Lebanon’s reconstruction in the years after the civil war, along with the countless billions of dollars selflessly donated by the same Gulf states who the leader of Hezbollah repeatedly denounced as “terrorists.”

Instead of calling for the mending of fences, Nasrallah emerged with one of his most divisive and violent speeches in years, perhaps even as reckless as his speech following October’s factional bloodletting in Beirut, during which he threatened to send 100,000 Hezbollah fighters to confront its rivals.

If Nasrallah wants to destroy Lebanon and embroil the region in war, these are exactly the kind of speeches needed to take us there. Even long-standing ally Prime Minister Najib Mikati immediately issued a statement denouncing Nasrallah’s “sectarian,” “useless polemic.” There was also condemnation from the full spectrum of other national figures. The speech was an hour-long torrent of lies, lies and more angry, vicious lies.

Nasrallah fears democratic elections in which Hezbollah and its allies decisively lose votes. Hence, his cronies Michel Aoun and Gebran Bassil have already succeeded in delaying the vote until May, and they won’t rest until they see the elections abolished altogether. Nasrallah’s speech was Hezbollah’s contribution to this same agenda: Embroiling Lebanon in so much chaos that elections become impossible.

Just as Nasrallah’s paramilitary allies sought to achieve in Iraq, Hezbollah seeks to create a climate of confrontation with Gulf states and kill off all prospects of investment, engagement and trade, so that Lebanon, Syria and Iraq can be devoured wholesale as satellites of Tehran.

Nasrallah’s shameless personal attacks against the Saudi monarch were the most transparent example of this, as he knows that Gulf, Arab and Islamic states will passionately rally around Saudi Arabia and its leadership in the face of such evil onslaughts.

Perhaps Nasrallah was agitated knowing he was about to launch an unmanned aircraft into Israel, which could provoke a conflagration, or because Hezbollah-trained Houthis had just hijacked a GCC ship carrying medical equipment. With the US carrying out bombing raids against Hezbollah-linked rocket sites in Syria and the Iran nuclear talks on the cusp of collapse into farce, the whole region teeters upon a knife-edge. One wrong move would spell catastrophe. Because these cowards fear going after the Americans directly, Nasrallah and Iranian Supreme Leader Ali Khamenei are taking revenge for Soleimani’s assassination by torturing defenseless Lebanon to within an inch of its life.

This bomb-throwing speech by a supposed man of God wasn’t merely reckless, it was the act of a man who sees peaceful elections, economic rebirth and healthy ties with neighboring states as contrary to his factional interests and, hence, he enthusiastically embraces conflict and chaos. If Lebanon had a functioning state, Nasrallah would rightly face trial for this unpatriotic act of treason and gratuitous sabotage of Lebanon’s sovereignty, as well as the rights of citizens to security, peaceful coexistence and prosperity.

Following this calculatedly psychopathic speech, it is the national duty of every patriotic Lebanese citizen to restrain and reject this man, his faction and his Iranian paymasters before they kick the nation and the region into the abyss.