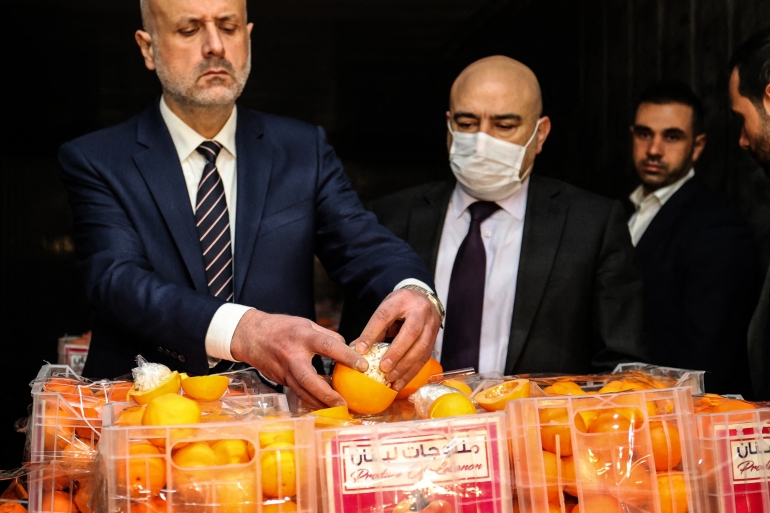 The interior minister says the plot to smuggle Captagon pills from Lebanon foiled, amid a diplomatic rift with Gulf countries.

Lebanese Customs said in a statement on Wednesday that they arrested several perpetrators and have opened a judicial investigation into a plot to smuggle the pills out of Lebanon after officials found them in a shipment of plastic oranges at the Beirut port.

Speaking at the port later, Interior Minister Bassam Mawlawi said he could not disclose details about who had been arrested and what they knew so far about the operation. However, he said the investigation will reveal where the pills were produced and packaged, and who was responsible for hiding them in the shipment of fruits.

“We promise [our] citizens and all the friendly countries, especially the Gulf countries, the Lebanese authorities are serious in combatting the smuggling of Captagon,” he said.

Sources familiar with the case told Al Jazeera that the Captagon shipment was heading to Kuwait.

This development comes days after the UAE confiscated a shipment of more than a million Captagon pills smuggled into the city hidden in plastic lemons.

In July last year, Italy seized from Hezbollah a record 14-tonne haul of the drug – or 84m pills – that had arrived from Syria . whose value was estimated at over one $billion

The seizure comes as the cash-strapped country tries to resolve an ongoing diplomatic rift with Saudi Arabia, the United Arab Emirates, Bahrain, and Kuwait.

Saudi Arabia last April announced an indefinite ban on Lebanese agricultural products after officials said they had thwarted an attempt to smuggle 5.3 million Captagon pills hidden in a shipment of pomegranates at Jeddah port.

Captagon is manufactured in Lebanon, Jordan and Syria, and is often exported to Saudi Arabia and other Gulf countries.

The Saudi authorities have since announced the seizure of several shipments containing millions of Captagon pills from Lebanon and Syria.

Lebanon’s diplomatic rift with the Gulf deteriorated further in October after a video of former Information Minister George Kordahi circulated on social media in which he criticised the Saudi Arabia-led war against Houthi rebels in Yemen.

In the footage that surfaced – of an interview Kordahi had given a month before his appointment – he said the Iran-aligned Houthis were “defending themselves … against an external aggression” in Yemen.

Kordahi also said the long-running conflict was “futile” and called for it to end.

Bahrain and the UAE also called on their citizens to leave Lebanon.

Saudi Arabia, meanwhile, banned all Lebanese imports into the kingdom.

Kordahi resigned as information minister in December in an attempt to resolve the spat.

“We think that the political class needs to step up and take the necessary actions to liberate Lebanon from the domination of Hezbollah, and through Hezbollah, Iran,” he said in an interview with France 24.

Saudi Arabia has especially been critical of Hezbollah’s role in Yemen backing the Houthi rebels against the Saudi-led coalition.

President Michel Aoun in a recent speech hinted that Hezbollah’s involvement in regional affairs has negatively affected Lebanon. Aoun is allied with Hezbollah

“What is the justification for straining relations with these countries and interfering in matters that do not concern us,” he asked hinting on friction with the Iran backed militia group