Cutting off Lebanon won’t stem the Captagon trade. The Gulf needs to address its addiction to the drug 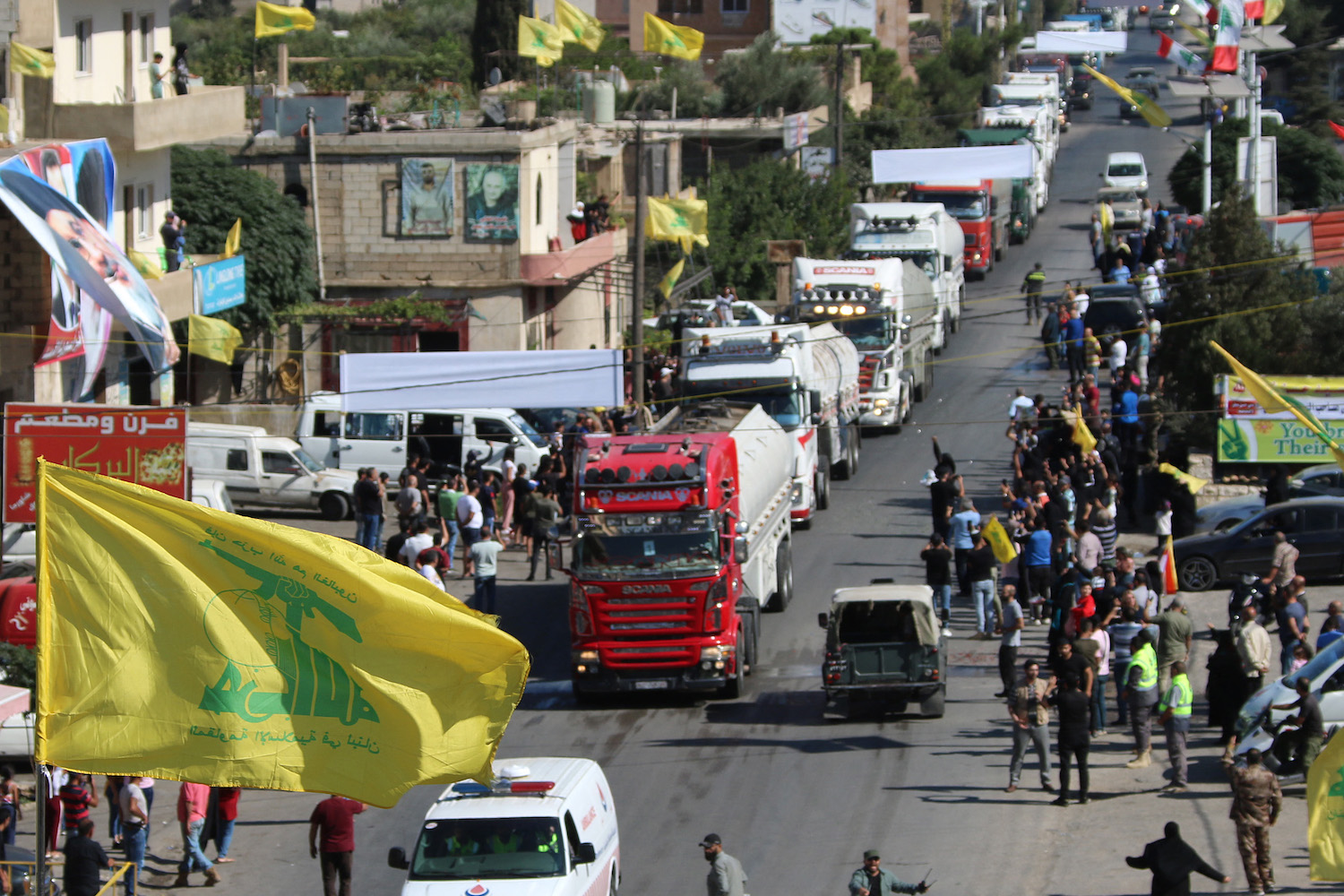 A Hezbollah flag flutters as tankers carrying Iranian fuel arrive at al-Ain in Hermel, in Lebanon’s Bekaa Valley, on Sept. 16. Dozens of tankers carrying Iranian fuel and transported by the Shiite Hezbollah movement arrived from Syria in Lebanon, in the grip of severe fuel shortages. (Photo by – / AFP) (Photo by -/AFP via Getty Images) STRINGER/AFP VIA GETTY IMAGESA
Share:

Instead of pushing Beirut to the economic brink, Saudi Arabia  and the other Gulf countries should address their own amphetamine addiction and work with Lebanon instead of against it  According to this Foreign Policy article article By Caroline Rose, a senior analyst and head of the Power Vacuums Program at the Newlines Institute for Strategy and Policy . By weakening Lebanon , The Gulf ban on imports of Lebanon’s agricultural produce has backfired. It has empowered Hezbollah and other non-state actors to exploit a widening law enforcement and regulatory void.

The late October release of an interview with George Kordahi on an Al Jazeera-affiliated program, filmed before he became Lebanon’s information minister, unleashed a diplomatic crisis. In the tape, Kordahi expressed sympathy with Yemen’s Iran-aligned Houthi rebels, against whom Saudi Arabia is currently fighting a brutal war. Saudi Arabia, Kuwait, the United Arab Emirates, and Bahrain promptly recalled their diplomatic envoys from Beirut, and Saudi Arabia imposed a ban on all Lebanese imports. The UAE additionally barred its citizens from travel to Lebanon.

But there is an unstated element in the recent Gulf pressure campaign against Lebanon that transcends political and sectarian dynamics: The Gulf is a destination market in the Middle Eastern drug trade. A notable uptick in smuggled shipments of captagon, an amphetamine-type substance—transited through overland routes in Jordan and Lebanon, as well as maritime routes in the Mediterranean and Red Sea—has overwhelmed ports of entry in the Persian Gulf, introducing a challenge that customs systems and interior ministries have struggled to navigate. Yet the decision to impose a blanket ban on Lebanese imports may have backfired.

Much like the November 2017 crisis, when Saudi authorities held then-Lebanese Prime Minister Saad Hariri hostage and forced his resignation (which he later rescinded), the recent Saudi move is an attempt to shift Lebanon’s balance of power against Hezbollah, a Shiite Islamist political party and military group supported by Iran. Amid stalemate, economic collapse, and political paralysis in Lebanon, Saudi Arabia and its allies have racked up pressure on Prime Minister Najib Mikati’s new, fragile government as a warning against rising Shiite influence in the country.

For decades, Saudi Arabia has sought to constrain Iranian influence among Lebanon’s Shiite population as well as its proxy control over Hezbollah. Until recently, Riyadh has accomplished this through its ties to Lebanon’s Sunni political elite. But the country’s ongoing political paralysis has created concern that Saudi leverage in Lebanon may now be waning.

Captagon’s quick ascent has added to Saudi Arabia’s anxieties. In the last two decades, the Persian Gulf, particularly Saudi Arabia, has transformed into the drug’s top destination market, where it has become a quiet but popular substance.

The Oct. 29 ban on all Lebanese imports was not Gulf countries’ first attempt to constrain illicit drug flows from the Levant. In April, Saudi Arabia imposed a ban on Lebanese agricultural products after authorities seized more than 7.8 million captagon pills at the port of Jeddah.

Illicit actors had used advancing smuggling tactics, hiding millions of pills inside the skins of pomegranates believed to have originated in Syria. The captagon had gone undetected by law enforcement as it transited through Lebanon to Saudi Arabia.

The seizure was a wake-up call for Saudi Arabia’s tax and customs authority, as well as its law enforcement system—a large drop in a bucket of more than 600 million captagon pills and hundreds of kilograms of marijuana that Saudi officials said have been intercepted in the country in the last six years. While Saudi law enforcement authorities have grown accustomed to influxes of captagon over the years, the large April seizure reflected smugglers’ growing sophistication and industrial production capacity—a challenge for customs officials in captagon destination markets. In the days that followed, some of Lebanon’s top export markets for agricultural products—Oman, Bahrain, Kuwait, and the United Arab Emirates—endorsed the Saudi ban. However, the mass prohibition did nothing to curb the illicit drug trade; in fact, it exacerbated it.

Overall, however, seizure data indicates that smugglers adapted to the ban, either adopting new methods tocamouflage captagon tablets or using new trafficking routes outside Lebanon, primarily through Jordan, to reach Gulf consumer markets. In June, authorities in Jeddah interdicted 14.4 million pills hidden in a shipment of iron plates routed through Beirut that originated in Syria’s port of Latakia.

There has also been a notable uptick in seizures at Saudi Arabia’s Al-Haditha Land Port, located along the border with Jordan about 100 miles southeast of Amman, indicating that captagon smugglers have started to increase traffic on overland routes from Syria through Jordan to bypass Saudi-Lebanese trade restrictions. In July, al-Haditha authorities intercepted 2.1 million pills hidden in hollowed-out tomato paste jar lids; in October, 5.2 million pills hidden inside a consignment of carbonate powder bags in the back of a cargo truck; and in November, more than two million captagon pills, seized in seven attempts, wherein captagon was camouflaged in starch flower bags, truck radiators, a truck cabin refrigerator, and even inside of the truck floorboards. There have also been more reports of seized captagon transited further east along routes in Iraq, as evidenced by the October seizure along the Iraq-Kuwait border of 50,000 pills hidden in a truck’s water tank.

The string of shipments proved that an agricultural produce ban could only stem part of illicit captagon flows. Globally, law enforcement officials generally only inspect 1 in 10 containers transiting through ports, and not all captagon seizures are publicly reported. As a result, these numbers likely represent only 5 to 10 percent of the actual amount of captagon tablets flowing into Gulf destination markets.

Yet the Saudi ban had a devastating effect on Lebanon’s agricultural producers and economy. Lebanon’s domestic agricultural market was faced with an excess in supply that caused a heavy hit to the country’s citrus, apple, potato, and grape trade. Though prices sunk by as much as 40 percent in local markets, increased domestic consumption did not follow due to the ongoing Lebanese financial crisis.

The lack of access to one of Lebanon’s largest export partners dropped crop prices, forcing Lebanese farmers to file for bankruptcy, smuggle their products into Syria for reexport to Saudi Arabia, or shift to less capital-intensive crops such as wheat and even illicit substances such as marijuana. In the wake of the recent ban on all imports from Lebanon—which is estimated to deprive the country of more than 5.6 percent of its total exports—alternative, illicit revenue streams have become more lucrative amid company layoffs, production shifts outside the country, and an economic crisis that has pushed 82 percent of Lebanese into poverty, a rate that has nearly doubled between 2019 and 2021.

Lebanese law enforcement and authorities have played a limited role in identifying captagon shipments and arresting suspects. But Gulf countries remain frustrated over the active role Hezbollah has come to play in the captagon trade and the inability of the weakened Lebanese government to counteract it.

Captagon’s primary production hub is in Syria, with a notable concentration of manufacturing facilities in regime-held areas. Here, Hezbollah has come to play a supportive role in providing captagon producers with technical expertise, cover, and protection during the transit process from Syria to Lebanon. This has also offered Hezbollah an alternative revenue stream during difficult financial times. Hezbollah-controlled checkpoints have largely helped divert detection of captagon shipments by Lebanese law enforcement; when there is the occasional seizure, raid, or arrest by Lebanese security forces, it takes place outside areas under Hezbollah control.

The recent blanket import ban imposed by Saudi Arabia will only amplify the very trade it wishes to curb. By denying all Lebanese producers top export markets—thereby adding an additional layer of economic hardship in Lebanon and manufacturing a legitimacy crisis for its weakened, newly formed cabinet—Gulf countries are creating additional space for Hezbollah to maneuver and for the illicit drug trade to thrive.

Although the ban has incentivized Lebanese officials to conduct occasional seizures to build back goodwill with Gulf states, the country’s economic devastation and political crisis serve as distractions from and detriments to effective enforcement. At present, the Lebanese government does not have clear strategy to disrupt captagon flows. Meanwhile, the state’s lack of capacity to effectively counter the captagon trade will likely empower Hezbollah and other non-state actors to exploit a widening law enforcement and regulatory void.

The decision may have similar spillover effects in Syria. Ravaged by its own civil war, Syria’s economy has grown to depend on Lebanon’s already-weakened financial sector and remittance flows.

The ban is also shortsighted because it targets just one transit country: Lebanon. And though Lebanon plays a role in the captagon trade, it is only one part of the equation. Syria remains the drug’s hub, and its illicit actors have adapted to new economic constraints—relying further on alternative maritime routes through the Mediterranean Sea and land routes through Jordan and Iraq that also provide access to consumer markets in the Gulf.

To effectively counter the captagon trade, destination markets in the Persian Gulf should consider the bigger picture. They can do this partially through proactive law enforcement coordination among transit and destination countries. But destination markets should also acknowledge that any successful strategy must address their own growing consumer markets. While drug use is a taboo subject in much of the Middle East, addressing the demand side—the human element—of the captagon equation is critical to combating it.

But instead of doing this, Gulf states have initiated a diplomatic and economic crisis that will only further Lebanese instability and expand the Middle Eastern drug trade. As the captagon trade adapts to new restrictions and obstacles, it is crucial for destination markets such as Saudi Arabia and transit countries such as Lebanon to work together—rather than against each other.

Caroline Rose is a senior analyst and head of the Power Vacuums Program at the Newlines Institute for Strategy and Policy, where she conducts research on ungoverned spaces, post-withdrawal security landscapes, contested territories, and emerging geopolitical challenges to the United States and its allies. She was previously the Middle East and Europe analyst at the forecasting firm Geopolitical Futures and an associate research assistant at the London School of Economics’ International Drug Policy Unit. Twitter: @CarolineRose8