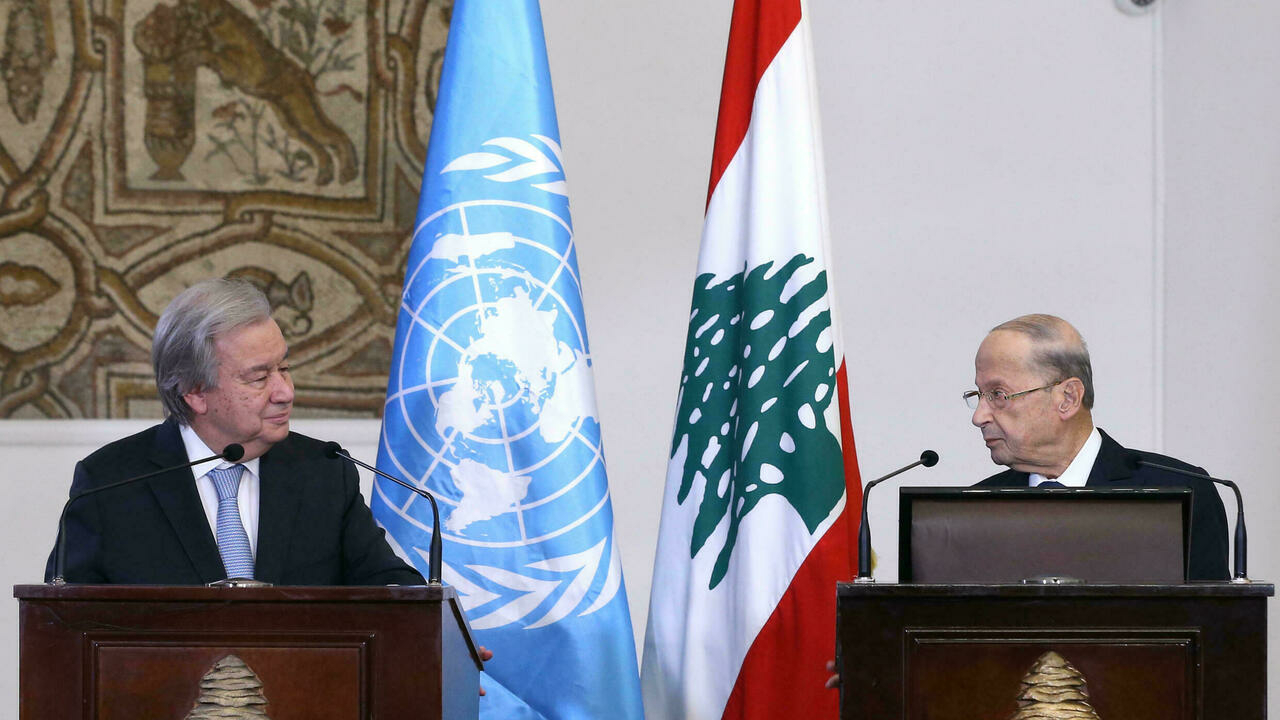 ‘I have come with a simple message: the UN stands in solidarity with the people of Lebanon,’ UN chief Antonio Guterres (left) told a press conference with Lebanese President Michel Aoun – DALATI AND NOHRA/AFP
Share:

Beirut (AFP) – UN Secretary-General Antonio Guterres arrived in crisis-ridden Lebanon on Sunday, hitting out at political leaders who “paralyse” the country in the face of its people’s suffering.

“I have come with a simple message: the UN stands in solidarity with the people of Lebanon,” Guterres told a press conference with Lebanese President Michel Aoun.

“Seeing the suffering of the people of Lebanon, Lebanese political leaders do not have the right to be divided and paralyse the country,” he added.

He said the objective of his meetings would be “to discuss how we can best support the Lebanese people to overcome the current economic and financial crisis and to promote peace, stability and sustainable development”.

Lebanon is in the throes of an economic meltdown dubbed by the World Bank as among the planet’s worst since the 1850s.

It is widely blamed on nepotism and corruption among the country’s ruling class.

Around 80 percent of Lebanon’s population is now estimated to be living under the poverty line.

Cabinet has failed to meet since mid-October because of infighting, in particular over the judge charged with investigating the catastrophic August 2020 explosion at Beirut’s port that killed at least 215 people, injured thousands and devastated swathes of the capital.

The UN chief urged politicians to work together to resolve the crisis and called on the international community “to strengthen its support to Lebanon”.

Aoun said authorities were working on a plan to restart the economy that will be “negotiated with the International Monetary Fund”, adding that implementing economic, financial and administrative reforms was also required.

He also told Guterres that he wanted legislative elections set for March next year to be “transparent and fair, in order to reflect the real desire of the Lebanese in choosing their representatives”.

The vote, the first major electoral test since the onset in 2019 of the financial crisis, is seen by many as a chance to challenge the ruling elite’s stranglehold on the country.

Guterres said the elections would be “key” and that the Lebanese “must be fully engaged in choosing how the country moves forward”.

Guterres is set to visit the site of Beirut’s port explosion on Monday, holding a minute’s silence for the victims.

He is scheduled to meet other high-level officials, religious leaders and representatives of civil society organisations before his departure on Wednesday.

He will also visit the impoverished northern city of Tripoli and the UN Interim Force in Lebanon (UNIFIL) in the country’s south.

The peacekeeping force, in coordination with the Lebanese army, is tasked with guaranteeing a ceasefire and Israeli withdrawal from a demilitarised zone on the southern border.