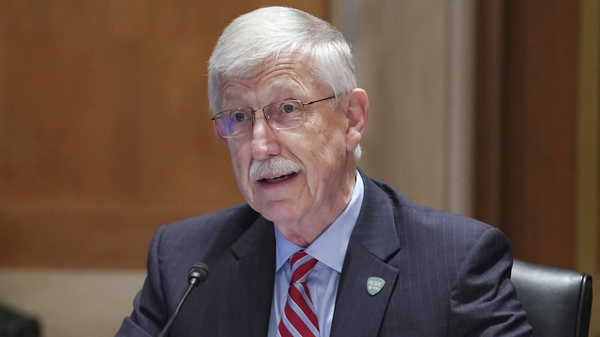 NIH Director Dr. Francis Collins holds up a model of the coronavirus as he testifies before a Senate Appropriations Subcommittee looking into the budget estimates for National Institute of Health (NIH) and the state of medical research, Wednesday, May 26, 2021, on Capitol Hill in Washington. (Sarah Silbiger/Pool via AP)
Share:

After spending more than 12 years as director of the National Institutes of Health, Dr. Francis Collins is retiring this weekend. But he’s no less worried about the public health agency’s latest pandemic curveball.

As the omicron variant threatens record-breaking rates of infections in the U.S., Collins departs with a warning. If Americans don’t take COVID-19 seriously, the country could see 1 million daily infections, he said.

“We cannot afford to let down our guard,” Collins told NPR’s Scott Detrow in an interview with Weekend Edition.

“I know people are tired of this,” he said, acknowledging Americans’ fatigue of having weathered almost two pandemic-stunted years. “I’m tired of it too, believe me. But the virus is not tired of us. It’s having a great old time changing its shape every couple of months, coming up with new variants and figuring out ways to be even more contagious.”

Early data shows that while omicron has the ability to easily evade immune protection and booster shots, those infected may be less likely to experience severe disease and hospitalization.

But it’s too early to know how the highly mutated omicron will act in the U.S. compared to previous variants, said Collins. With omicron’s 57 different mutations, he said, it’s “almost like we’re starting over with a different virus than where we began.”

According to scientists’ most pessimistic projections, the U.S. could reach over a half-million average daily infections by the end of January — more than double last winter’s peak.

“Even if it has a somewhat lower risk of severity, we could be having a million cases a day if we’re not really attentive to all of those mitigation strategies,” he said.

Even the most optimistic scenarios could mean a strain on hospitals in many regions that are already squeezed by the delta surge.

Collins notes that the Biden administration has at least 60 emergency response teamson standby to support health care systems in the event of a crush of infections.

“I expect those surge teams are going to be busy — already that’s been put in place in some instances because of delta — and I’m not going to be surprised if there’s even more of a demand in the next month or two,” he said.

All in the last week, the rapid clip of omicron infections in the country has once again forced shutdowns of professional sports games, theaters, restaurants and schools. Some people are rethinking their holiday travel plans.

As for Collins’ own plans, he says he’ll be keeping a close eye. But at the moment, he’s hoping to host a Christmas Day gathering with pandemic precautions in place.

“We were planning to invite some of the trainees at NIH who are far from home to come for a brunch on Christmas Day at our house if they’re all fully vaccinated and boosted,” he said. “Still planning to go forward, very carefully, with a small group, and everybody will be wearing masks except when they’re eating.”