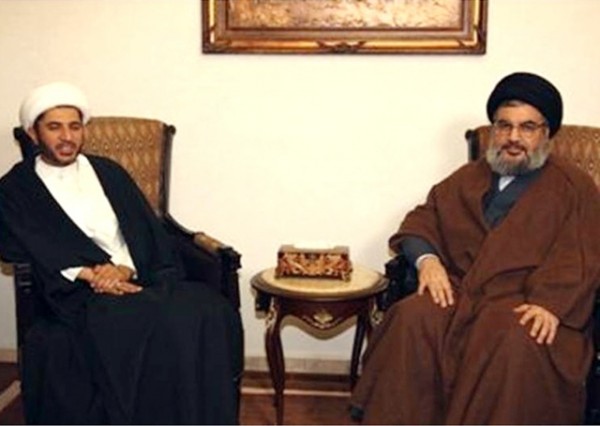 File photo of Bahrain’s Al Wefaq party leader Ali Salman . he is is shown with Hezbollah chief Hassan Nassrallah. A Bahraini court sentenced in June 2016 Salman to 4 years in prison . Salman who studied in the Iranian city of Qum is closely associated with the Iranian leaders and favors the Wilayat al Faqih System
Share:

The deportation order is likely another attempt to ease an unprecedented diplomatic rift between Lebanon and several Gulf Arab nations, including Bahrain, a Sunni monarchy with a majority Shiite population. Earlier this month, Lebanon’s information minister, who is at the heart of the weekslong crisis, resigned in a bid to ease the rift.

Bahrain in 2016 suspended Al-Wefaq, the island nation’s largest opposition political party, as part of its crackdown on dissent that erupted following the 2011 Arab Spring uprisings in the region. The party, many of its members now living in exile, last week held a press conference in Beirut to launch its annual human rights report.

It wasn’t immediately clear how many Al-Wefaq members will be impacted by the decision. According to a statement published on Lebanon’s state-run news agency, Interior Minister Bassam Mawlawi on Wednesday spoke over the phone with his Bahraini counterpart, Rashid bin Abdullah Al Khalifa. The call was followed by his decision asking Lebanese General Security to deport non-Lebanese members of Al-Wefaq.

During the conference, organized at a Beirut hotel, Al-Wefaq said it has documented more than 20,000 detainees in Bahrain since 2011, including hundreds of unlawful detentions and enforced disappearances in just 2019 and 2020.

Bahrain said it “strongly protests” what it described as Lebanon hosting “hostile members who have been designated as supporters of terrorism” to spread false information that defames the Gulf Arab nation. It called on Lebanon to bar such events, saying they “are not harmonious with brotherly relations.”

The diplomatic row between Lebanon and Saudi Arabia and other Gulf Arab countries broke out in late October when remarks by Minister George Kordahi were aired, critical of the Saudi-led war in Yemen.

Saudi Arabia, followed by the United Arab Emirates, Kuwait and Bahrain, withdrew their ambassadors and asked the Lebanese envoys to leave their capitals.

After weeks of resisting, Kordahi resigned but the crisis has persisted, rooted in concerns Saudi Arabia and its allies have of Iran’s rising influence in the region, including in Lebanon where the Iran-backed Shiite militant Hezbollah group wields considerable power. Bahrain accuses Iran of backing Al-Wefaq, which is also seen as an ally of Hezbollah.

“When Bahrain cannot bully legislators criticizing its abysmal rights record in capitals like London, Washington and Brussels, it seems it can only muscle up against fragile states,” Sayed Ahmed Alwadaei, director at the London-based Bahrain Institute for Rights and Democracy, said in an emailed statement. He was referring to Lebanon, which has been battling the worst economic crisis in its history.