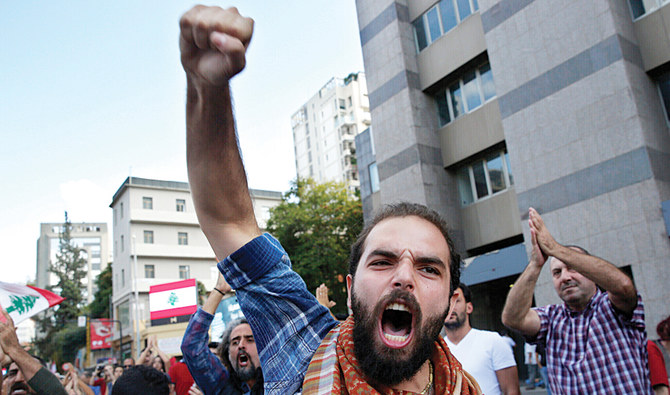 A protester shouts slogans during a rally to protest government policies, in Beirut. (AP) Many Lebanese are giving up on the country and have decided to leave . They see no future here “Everyone is thinking of emigrating,” said Wissam Harb, an out-of-work musician who used to play at Beirut bars and restaurants
Share:

The emigration of Lebanese, especially Christians, raises concerns in Lebanon in terms of the demographic change that it may lead to, in light of the economic crisis that the Lebanese have been experiencing for nearly two years. Many of the Christiana leaving Lebanon are heading to Europe and the US for better life and may never come back

BEIRUT — Recently, the number of Lebanese who are emigrating, especially Christians, has soared, amid the exacerbation of an unmatched economic crisis hitting the country. Some fear this brain drain will inevitably lead to a demographic change and cause a new distribution of the sectarian map in the country.

Father Tony Khadra, head of the Labora Foundation that aims to provide job opportunities for young people, especially Christians, told Al-Monitor, “The number of Lebanese emigrants has witnessed an upward trend for two years now. The percentage of Christian emigrants has exceeded 60% in the last two years.”

Jad Hawat, a young Lebanese Christian man who emigrated to Iraq a year ago and is still there, told Al-Monitor, “I graduated in 2019 as a mathematics teacher. I spent a year searching for a job, to no avail. I decided to leave and I got a job at a school in Iraq.”

He said, “Despite all of Iraq’s security and political crises, the crisis in Lebanon is much worse. I came here to build a future for myself, hoping that the crisis back home will end one day. I think about returning to Lebanon at the earliest in five years. This is because I live in a neighboring Arab country, but I doubt those who left for Europe and the United States will ever come back. They will live in stability and economic growth.”

There are no official statistics on the emigration rate in Lebanon. A study published Dec. 8 by Information International, a studies and statistics company in Lebanon, shows a significant surge in the number of citizens searching for a job and better living conditions abroad.

According to Khadra, Lebanon has never witnessed such a surge in emigration. “I wonder why the state is afraid to disclose all these numbers and these statistics,” he said.

Mohammad Shams el-Din, researcher at Information International, told Al-Monitor, “It is not possible to know how many are Christians out of the total number of travelers and emigrants. Muslims make up the majority in Lebanon, and I think that they account for the bulk of emigrants.”

Research published in 2018 by Information International showed that Christians made up 30.6% of the Lebanese community, while Muslims made up 69.4%. According to the last official census conducted in 1932, Muslims made up 40% of the population and Christians 58.7%.

In November, Pope Francis had expressed his deep concern over the consequences of the stifling living crisis in Lebanon, especially the emigration of a large number of Lebanese, including Christians.

Khadra noted, “Of course we fear that the number of Lebanese and Christians in particular would shrink. We are worried today about a major demographic change, especially since naturalized individuals have now taken on Lebanese identities. A bill is being proposed in parliament that would allow 80,000 stateless persons to be granted Lebanese citizenship.”

Sarah Haber, 24, told Al-Monitor, “Emigration has become our only ambition, especially after Hezbollah took control of everything in Lebanon. I love Lebanon a lot, but we can’t live here. We can’t get basic services. This is very frustrating.”

She said, “Of my 20 male and female friends from my village Bhamdoun in Aley district, 13 have emigrated. Some to France, others to Germany and Bulgaria. They are very happy and they earn around 1,200 euros [$1,350] per month.”

Georges, a social activist, who preferred not to reveal his full name, told Al-Monitor, “It is true that Lebanese people of all sects are emigrating, but there is a fear that Christians will not return after the economic situation improves because they are more likely to settle in the West. This was the case for the Christians who emigrated during the civil war in the 1980s.”

He pointed to a general feeling among Christians in Lebanon that they lost the battle during the civil war, and that they have become a minority, making up nearly half of the Lebanese population. “This is why they refuse to conduct a new census,” he argued. “Christians feel they lost power after the rise of Hezbollah as a political force, and this explains their growing desire to emigrate. The explosion at the port of Beirut in August 2020 has upped the number of Christian emigrants.”

In recent months, the General Directorate of General Security centers were crowded with Lebanese citizens of all sects wishing to obtain or renew passports. Citizens waited for hours to submit their application. Some of them are getting their passport just in case they need to leave the country in an emergency, while others have actual plans to leave.

In recent months, as Lebanon grapples with its worst-ever financial crisis, the majority of the population has been thrown into poverty. According to a UNICEF survey that sheds light on the situation of children in Lebanon, more than half of the surveyed families have at least one child who skipped a meal in September, as compared with close to 37% in April.

Meanwhile, protests against the worsening economic and living situation in Lebanon are renewed from time to time, but nothing changes. The US dollar has skyrocketed to 25,000 Lebanese pounds, taking prices of food commodities, fuel, bread and health care even higher. With no rescue plan in sight, the economic free fall seems to be bottomless.

Amid this bleak scenario and with the intensification of the economic crisis, many young and educated Lebanese see emigration as a way out to a better life. Destinations vary between the Gulf countries, Turkey, Cyprus, Canada, Europe and many other new destinations.

After meeting Lebanese Prime Minister Najib Mikati at the Vatican Nov. 25, Pope Francis said, “I assure you of my prayers, my closeness and promise to work diplomatically with countries so that they unite with Lebanon to help it rise again.”

Khadra concluded, “It is certain that Pope Francis cares about Lebanon for being a message of diversity and richness to the Middle East. He is keen on keeping Christians in Lebanon in order to preserve this diversity. But all initiatives must have concrete results on the ground. Lebanon today is threatened by a demographic sectarian change.”