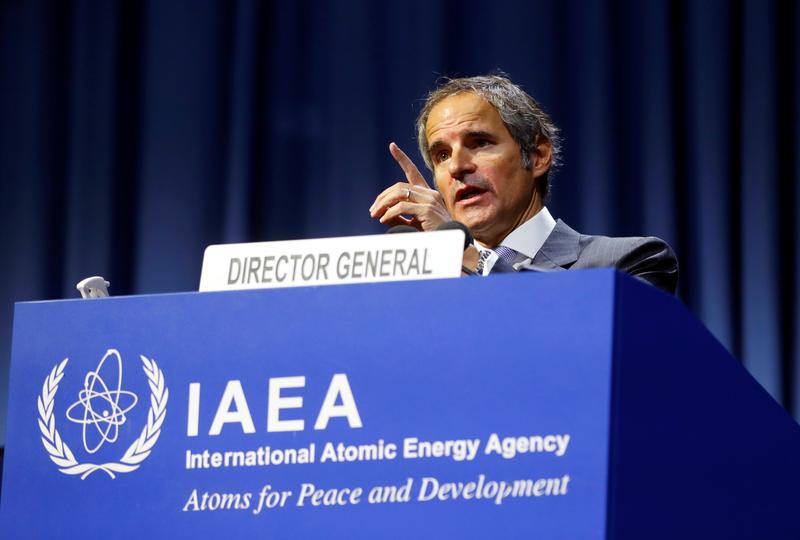 Rafael Grossi, the head of the UN’s nuclear watchdog, the International Atomic Energy Agency (IAEA), was in Tehran on Tuesday for talks with representatives from the Islamic Republic’s new government.
Share:

IAEA boss Rafael Grossi has called on officials in Tehran to grant access to surveillance footage at nuclear sites. Grossi’s third visit since February is meant to pave the way for a resumption of the Iran nuclear talks.

Rafael Grossi, the head of the UN’s nuclear watchdog, the International Atomic Energy Agency (IAEA), was in Tehran on Tuesday for talks with representatives from the Islamic Republic’s new government.

“I hope to establish a fruitful and cooperative channel of direct dialogue so the [IAEA] can resume essential verification activities in the country,” said Grossi via Twitter.

I'm travelling to Tehran today for meetings with Iranian officials to address outstanding questions in #Iran. I hope to establish a fruitful and cooperative channel of direct dialogue so the @IAEAorg can resume essential verification activities in the country.

Among those with whom Grossi met was Mohammad Eslami, the new head of the Atomic Energy Organization of Iran (AEOI), who replaced Ali Akbar Salehi, who served the post since August 2013 and played a crucial role in the nuclear talks that led to the signing of the Joint Comprehensive Plan of Action (JCPOA) .

Eslami was sanctioned by the UN in 2008 for “being engaged in, directly associated with or providing support for Iran’s proliferation sensitive nuclear activities or for the development of nuclear weapon delivery systems.”

The Atomic Energy Organization of Iran said that “establishing a clear framework for cooperation between the IAEA and the agency is one of the main topics of discussion.”

Resumption of negotiations over the fate of the 2015 Joint Comprehensive Plan of Action (JCPOA), otherwise known as the Iran nuclear deal, are scheduled to begin on November 29 in Vienna, where the IAEA is headquartered.

Why can’t IAEA inspectors get access to Iranian nuclear sites?

In 2018, then-President Donald Trump unilaterally withdrew the US from the deal and reinstated crippling sanctions on Iran.

One year later, Iran began limiting its cooperation with international observers while at the same time increasing the amount of nuclear material it was enriching — as well as the quality thereof.

Since then, Tehran has demanded that all sanctions imposed or reimposed on Iran by the US since 2017 be lifted.

Under President Joe Biden the US has affirmed its willingness to return to the JCPOA but has also warned time is running out, saying that Iran is approaching the point of no return for reviving the deal.

Iran has steadfastly maintained that its nuclear program is peaceful. Regional rival Israel, however, has repeatedly warned it will not sit idly by as Tehran builds a nuclear weapon. Israel is suspected of having carried out a number of attacks on Iran’s nuclear program.

On Tuesday, Israeli Prime Minister Naftali Bennett said Iran’s nuclear program had reached “a very advanced stage,” and noted he expects “disagreement with our greatest of friends” over how to deal with the issue. “Either way, even with the return to an agreement, Israel is of course not part of the agreement. Israel is not bound by it,” said Bennett, “We will maintain our freedom to act.”

Israel’s position, combined with Iranian intransigence, has raised the risk of a wider confrontationwith Tehran, which has taken a harder stance ahead of talks under its new President Ebrahim Raisi — a protege of Iranian Supreme Leader Ayatollah Ali Khamenei.

In December 2020, Iran’s hard-line parliament approved a bill that would partially suspend UN inspections at its nuclear facilities if European signatories did not offer relief from US oil and banking sanctions by February.

Since February, the IAEA has been unable to access imagery from surveillance cameras that it had installed at Iranian nuclear sites, making it increasingly difficult to monitor Tehran’s growing uranium stockpile.

Grossi also voiced concern over IAEA inspectors “being subjected to excessively invasive physical searches by security officials at nuclear facilities in Iran” in a separate report to IAEA member states earlier this month.

The remaining JCPOA signatories — The United Kingdom, France, Germany, China and Russia — will join next Monday’s talks in Vienna. The United States will participate indirectly.