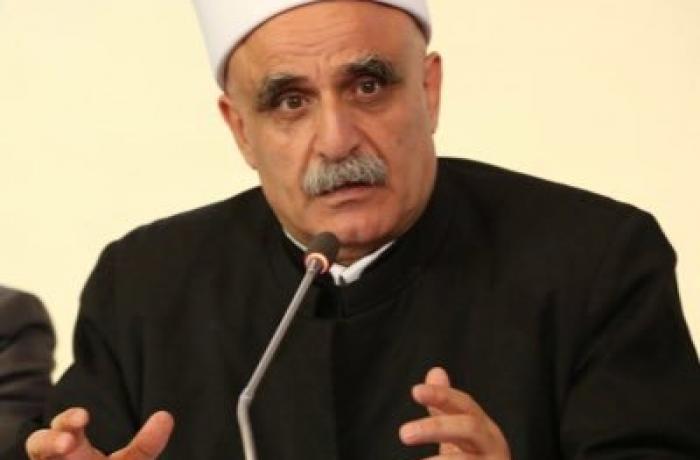 Sheikh Sami Abil-Muna won the uncontested election as the new Druze spiritual leader> His title will be the Sheikh al All of the Druze community
Share:

On Thursday the handover process took place between outgoing Sheikh Al-Aql Naim Hassan and Sheikh Sami Abi Al-Muna at the the Druze House in, Verdin Beirut, in the presence of a number of members of the Board of Directors of the confessional council, following the election of Abu Al-Muna, as the new Sheikh Al-Aql of the . Druze sect on September 30, 2021.

The handover ceremony included a speech by outgoing Sheikh Naim Hassan, in which he commended the cooperation with the Board of Directors as well as with the two administrative bodies in the confessional council wishing “Sheikh Sami Abi Al-Muna success in continuing the march and bearing this responsibility to serve the community and the nation.”

In turn, Sheikh Sami Abi Al-Mana thanked Sheikh Naim Hassan for his love, embracing and constant care,” saying: “We derive from this experience and the cooperation of all the will to work to face the next stage at all levels. Our intention is to work with will and determination in the hope that circumstances will allow us to achieve what we all aspire to,” stressing that “today we are facing a great and difficult task , but endearing responsibility, as it contains an important message for the Druze community and the country in general, with the will and sacrifices of everyone as well.”

He addressed Sheikh Naim Hassan by saying: “In your era, many achievements have been made, and not everything is measured by stone and construction, but by hard work. . You received the mandate without an institution and organization, while we receive from you an organized institution and advanced institutional work, which we will seek, God Almighty, to preserve and develop through the solid will and cooperation of all.

About the new Sheikh al Akl of the Druze community

President Michel Aoun was among the first to congratulate the new spiritual leader of the Druze community.

Sami Abil-Muna was the only name proposed to the Druze Community Council when the deadline for submitting candidates for the office of Sheikh Akl expired on 10 September, the day of the election.

Married, father of four, including a boy who died prematurely of cancer, Sheikh Sami Abil-Muna is the secretary general of the al-Ourfan Foundation, which has the largest network of Druze schools and social services.

He graduated with a Bachelor of Arts from the Lebanese University (1980), and a PhD from the Faculty of Religious Sciences at Saint Joseph University with a thesis on “The Druze Vision of Islamic-Christian Dialogue in Lebanon” (2015).

He is active in all education-related platforms, and is regularly invited to international conferences centred on interfaith dialogue.

A poet, he is appreciated as a speaker and regularly invited to speak at conferences organised by the Druze community abroad.

“He is the international face of the community,” commented Fr Fadi Daou , founder of Adyan, an NGO working on the concepts of “inclusive citizenship and diversity” and “spiritual solidarity”.

“He is a brother to me,” added the clergyman, “in the spirit of the fraternity which Pope Francis espouses in his encyclical, whereby we are all responsible for one other.

“He is also a man of peace, who does and will do everything to boost reconciliation on the Mountain, truly and genuinely committed to living together, while at the same time proud of belonging to his community. His election is an opportunity for his community and for Lebanon.”