Lebanon is dragged back into eye of Iranian-Saudi storm: Analysis 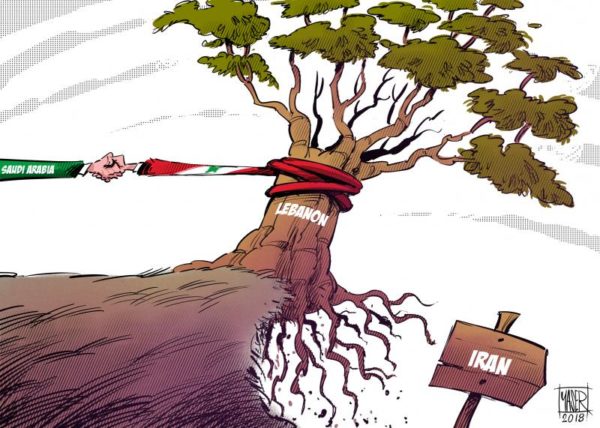 Cartoon showing Lebanon is being dragged into the eye of Iranian-Saudi storm – credit Yaser Ahmed , The Arab Weekly
Share:

By Tom Perry and Ghaida Ghantous

BEIRUT (Reuters) – Already mired in economic collapse, Lebanon is facing a blast of Gulf Arab anger after a prominent broadcaster-turned-minister levelled blunt criticism at Saudi Arabia, in a row that has further strained Beirut’s ties with once generous benefactors.

Many ordinary Lebanese fear it is they who will pay the price for the diplomatic deep freeze provoked by the latest spat, which has roots in a long-running rivalry between Saudi Arabia and Iran that underpins conflicts across the Middle East.

Saudi Arabia and its fellow Gulf Arab monarchies once spent billions of dollars in aid in Lebanon, and still provide jobs and a haven for much of Lebanon’s huge diaspora. But the friendship has been strained for years by the growing influence of Lebanon’s powerful Iran-backed Hezbollah militant group.

For Riyadh, whose sway in Lebanon has waned as Tehran’s has grown, Kordahi’s comments were just a symptom of Hezbollah’s continued dominance of the political scene, though they were recorded before he took office.

Coming as the Houthis advance in Yemen, the fallout of his comments underlines the depth of Iranian-Saudi rivalries. Gulf concerns about Tehran have been stoked by a lack of progress in U.S.-led efforts to revive a deal curbing Iran’s nuclear work.

Saudi Arabia and other U.S.-allied Gulf states have long struggled to counter the influence Tehran has carved out across the region by arming, training and financing Shi’ite Muslim groups modelled after Hezbollah, which it founded in 1982.

Saudi Arabia’s foreign minister told Reuters at the weekend the issue went beyond the comments by Kordahi, who was named to Prime Minister Najib Mikati’s government by Suleiman Frangieh, a Maronite Christian and a close ally of Shi’ite Muslim Hezbollah.

“It’s important that the government in Lebanon … forges a path forward that frees Lebanon from the current political construct, which reinforces the dominance of Hezbollah,” Prince Faisal bin Farhan Al Saud said.

Saudi Arabia and Gulf allies have expelled Lebanese ambassadors and recalled their envoys from Beirut. Riyadh has also halted imports from Lebanon, which were already suffering because of an earlier Saudi ban on Lebanese fruits and vegetables by Riyadh due to drugs being smuggled in shipments.

“From Riyadh’s vantage point, this recent crisis is seen as an opportunity to pressure the Lebanese system to take a stand against Iran and Hezbollah,” said Sanam Vakil, deputy director of Chatham House’s Middle East and North Africa Program.

Viewed from Tehran, Riyadh’s move shows the Saudis are losing to Iran on the diplomatic front and in need of some leverage, a senior Iranian hardline official close to Supreme Leader Ayatollah Ali Khamenei’s office said.

For Lebanon’s decimated economy, the big concern would be any measures affecting the hundreds of thousands of Lebanese who work in Saudi Arabia and the United Arab Emirates, and the dollars they send home to a nation drowning in poverty.

The fear is gripping Lebanese expats in the Gulf, despite official assurances they will not be sent home.

UAE political analyst Abdulkhaleq Abdulla said Saudi Arabia was being careful not to punish the Lebanese, as were other Gulf states. But other steps “to convey the deep Gulf discontent with Hezbollah” might happen, including ending flights, he said.

It isn’t the first time in recent years that hostility to Hezbollah has led Riyadh to act against Lebanon.

In 2017, then Prime Minister Saad al-Hariri unexpectedly resigned while on a visit to Riyadh, plunging Lebanon into crisis. Sources including the French president have said Saudi Arabia held him captive at the time. Riyadh denies this.

Another crisis was the last thing Mikati needed as he struggles to address the financial meltdown which has plunged more than three quarters of Lebanese into poverty.

Mikati, a billionaire tycoon, has said Kordahi’s remarks were made before he became a minister and had nothing to do with the government. Kordahi has said he will not quit.

Mikati’s cabinet was already in trouble because of a standoff over a probe into last year’s Beirut port explosion. The cabinet has not convened since Oct. 12.

Western states want to see progress towards an IMF deal and elections held on time on March 27. Hezbollah’s opponents see the election as a chance to overturn the majority won in 2018 by the group and by parties that support its possession of arms.

Christian seats are seen as an area where Hezbollah allies could lose. One party looking to gain is the anti-Hezbollah, Christian Lebanese Forces, widely seen as Riyadh’s last major Lebanese ally.

Lebanon is “being cut off from the Arab world by the behaviour of Hezbollah and its allies in government”, said the LF’s Ghassan Hasbani, a former deputy prime minister.