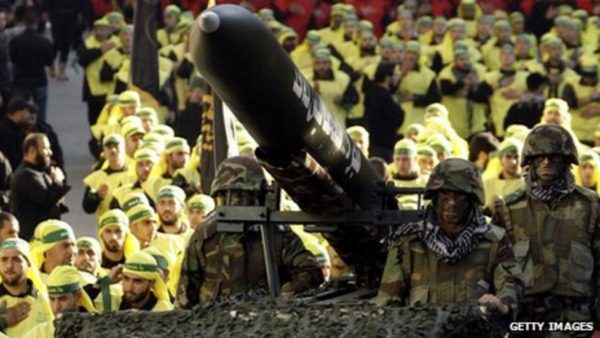 Even though Hezbollah continues to publicly parade its military power it finds itself facing an unprecedented array of threats and challenges. The question that is being asked after Russia’s Putin gave Israel the green light to attack Hezbollah and Iran in Syria is : Will it be fatally weakened if Iran and its backed militias are driven out of Syria ?
Share:

Israel has launched an aerial attack with a number of missiles targeting an area on the outskirts of the Syrian capital of Damascus, Syrian state TV said early on Wednesday, citing a military source.

“The Israeli enemy launched an aerial aggression with a number of missiles,” the news agency quoted a military source as saying, naming the targeted area as Zakia.

The Britain-based Syrian Observatory for Human Rights said the targets were army positions and arms depots belonging to Iran-backed fighters.

Last Saturday, Israeli also fired missiles towards the suburbs of the Syrian capital, although they were intercepted by Syria’s air defences.

The attacks came days after Syria accused Israel of carrying out an attack in the country’s south.

Israel, alarmed by Iran’s growing regional influence and military presence in Syria, has launched hundreds of attacks in Syria over the years but rarely acknowledges or discusses such operations.

The attacks on Syria usually happen during the night.

Israel has acknowledged it is targeting bases, weapon convoys and facilities linked to Iran-allied militias, such as the powerful Lebanese Hezbollah group.

It is also targeting arms shipments believed to be bound for the group.

Hezbollah is fighting on the side of Syrian President Bashar al-Assad’s forces in the civil war.