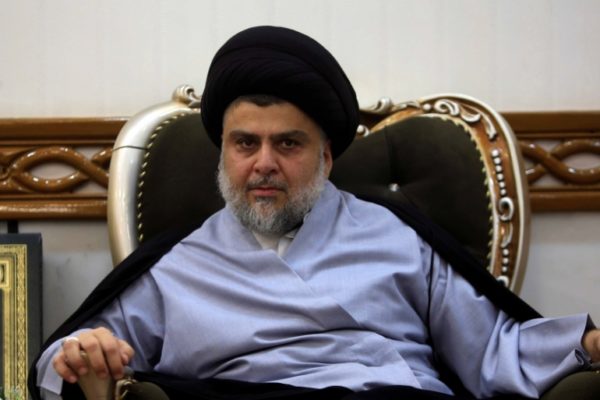 Muqtada al-Sadr said after the attempted assassination that the army had to “take charge” of Iraq without giving further details [Getty]
Share:

a al-Sadr remains one of Iraq’s most influential political figures and plays a pivotal role when it comes to the country’s future. He is currently considered the kingma, but it remains unclear if he can form a government with stability.

In the latest elections, al-Sadr’s party obtained 70 of a total of 329 parliamentary seats – a significant increase compared with the result of 2018, when his movement won 54 seats.

Despite this election result, al-Sadr did not run as a candidate for Iraq’s prime ministership.

“Sadr’s strategy to maintain followership is his claim to be a reformer. Using this claim, he has supported the Tishreen/October Movement for months until Iran called on him to withdraw this support,” said Al-Hassani.

“His flip-flopping on this particular matter may have cost him some followers, but for the most part, his followership is blindly loyal and truly believes in his image as a reformer. On this basis, I can see Sadr avoiding the premiership to maintain his claim to reform. His party also is strategic in its alliances. In the 2018 election, it allied with the Communist Party of Iraq to maintain this reform title.”

“This is all ironic, considering that he has had Sadrists in previous cabinets holding ministries such as the very deteriorating Ministry of Health while claiming to bring about reform,” Al-Hassani added.

The questions around his persona have not had a significant impact on his popularity, however.

“By falsely claiming to boycott the election in the late summer, he won leverage because all the politicians who would seek legitimacy in the election needed him to participate. This was a smart move, so when Sadr did officially ‘rejoin’ the elections, we learned that he never really intended to boycott, as his party had been mobilising in the meantime with a mobile app, voter card registration, etc,” said Al-Hassani.

While al-Sadr’s parties obtained the most seats and thus the ability to form the next government, he still faces complex encumbrances, particularly ideological ones, Al-Hassani noted.

“With some Iran-backed parties like Fatah, threatening violence unless they get the vote recount which they demand, government-formation will be a challenge. Sadr, with his own militia, Saraya al-Salam, can fight Iran-backed units of the PMF but would rather not. Instead, he has been calling for calm.”

In terms of what the government will most likely look like, Al-Hassani considered one scenario in particular to be the most conceivable.

“Sadr will most likely need to enter into an agreement with Fatah and its partners, albeit reluctantly. With that said, there is a greater chance in him forming an alliance with [Nouri] Maliki, his former foe.”

“Whatever happens next in Iraq will need Sadr’s approval as in the past,” she added.

However, any coalition al-Sadr may or may not be able to form is likely to have an adverse effect on his own party, Sajad Jiyad, a fellow at Century International and director of the Shia Politics Working Group, told Al Jazeera.

“Sadr claims that the next government will be a Sadrist one and the prime minister a staunch Sadrist and it may become a reality, but other partners will be needed to form a government and the risk of taking sole responsibility for government failures may mean that he accepts a coalition that reduces the Sadrist identity of the government,” he said.

Al-Sadr is the son of Grand Ayatollah Sayyid Muhammad Muhammad-Sadiq al-Sadr, a Shia dignitary who was politically active against the former leader Saddam Hussein, which he paid with his life in 1999.

“The Sadrist base is significant in Baghdad and the southern provinces because it represents a Shia underclass that struggled during the previous government but viewed Muhammad al-Sadr as a religious authority who cared for them and preached to them when no one else dared to. This base continues to feel marginalised today, and al-Sadr appeals to them as the heir to his father’s position, but also as they feel he is their voice against all other political and religious factions,” said Jiyad.

In addition, al-Sadr is also deeply woven into the power structure of the Iraqi state. His confidants sit in government offices, act as vice ministers and in managerial positions.

After the US toppled Saddam Hussein in 2003, al-Sadr and his supporters opposed the intervention force. His supporters inflicted painful losses on US troops. As a result, al-Sadr became one of the most wanted men in Iraq.

In recent times he has also increasingly turned against Iran’s influence. “He does attempt to deviate from Iran’s goals in Iraq, yet is influenced by Iran from time to time,” Al-Hassani noted.

Hence, al-Sadr does not seem to have a clear strategy towards Iran in the future.

“We can expect Sadr to flip flop on some issues and to distance himself from Iran while still maintaining some ties with it. His leverage is in his unpredictability, and that can be a psychological weapon against his political counterparts. Of course, Iran will find a way to influence the government formation process to ensure that parties like Fatah maintain their power,” said Al-Hassini.

Religious influences have also played a role in al-Sadr’s popularity. While Shia, he has by no means excluded Sunni and continues to advocate a non-denominational position.

“Unlike Fatah and other parties, Sadr does not rely on sectarian rhetoric in his campaigning. Instead, he runs on a populist note to gain more support. He is willing to join forces in cross-denominational alliances, and this gives his positionality greater power,” Al-Hassani said.

With that being said, political parties in Iraq remain mostly denominational, and it may take many years for new parties who focus on issues above identity to become dominant, Jiyad noted.

Al-Sadr also knew how to leverage the protests in the country when he supported the demonstrators.

He has presented himself as the tribune of the people and spearhead of the resistance against oppression, corruption and other abuses. All of this gave him a high degree of legitimacy in the eyes of his followers. However, here, too, a double game is played, said Al-Hassani.

“During the Tishreen protests, his ‘deputy’ directly incited violence against protesters in Nasiriya and praised the violence afterwards. When we discuss today, we must not forget his threat to activists and protesters.

“Sadr is by no means innocent, nor is he a man of the people as he claims to be,” Al-Hassani added.

With the violent suppression of the protests, so too were the hopes of an end to the corruption and the grievances connected with it. Hopes for a united Iraq with a robust civil society were also severely dampened. All of this has contributed to the heightened volatility in the country, but the origins of the continuing crisis remain elsewhere.

“What made the situation volatile is the violence practised by state and non-state armed groups: the assassinations, kidnappings, open murders of protesters in broad daylight. Free speech in Iraq is under dire threat. Many activists have had to flee either to the Kurdish Region of Iraq or outside the country. There is a lack of employment opportunities, a deteriorating healthcare system during the pandemic, and deteriorating infrastructure, not to mention social issues that result from all this, such as domestic violence, drug addiction, a rise in suicide rates, etc,” said Al-Hassani.

“At the moment, the volatility rests in the threats of violence and fears of escalation. It remains up to political winners like Sadr and behind-the-scenes political agreements to determine what happens next,” she added.

Whoever becomes the new head of state in Iraq, it will be harder for al-Sadr and his party to stand in the centre of power moving forward – and at the same time to position himself as the leader of a movement against the establishment. After all, to govern means to make decisions.

Moreover, with voter turnout of 41 percent, the new government’s democratic legitimacy already seems to be massively weakened before it has been formed.