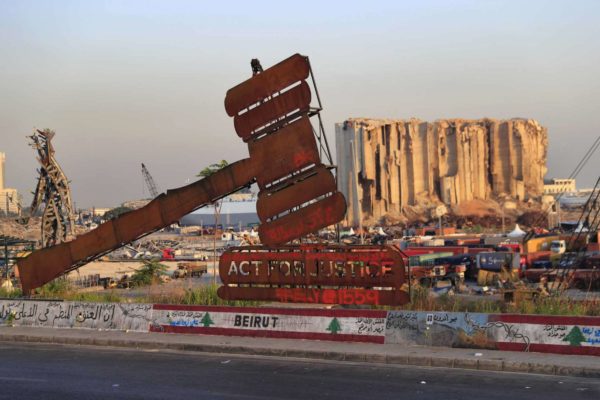 FILE – In this Aug. 4, 2021 file photo, a monument that represents justice stands in front of towering grain silos that were gutted in the massive August 2020 explosion at the port that killed at least 245people , wounded over 7,000, destroyed a large section of the capital and left 300, 000 homeless in Beirut, Lebanon. Hezbollah and and its allies are trying to get rid of Judge Tarek Bitar who is probing the blast and were able to suspend his investigation several times . a move that outraged the relatives of the victims of the blast . Hezbollah is reportedly concerned over being exposed for its role in acquiring, storing and using of the ammonium nitrate that exploded at the port (AP Photo/Hussein Malla, File)
Share:

Al-Jadeed TV reported the session was postponed after “the failure to reach an exit for the Cabinet rift between the Shiite duo, Marada and the President,” noting that “contacts were kept ongoing in order to reach an understanding.”

Sources close to President Michel Aoun and PM Najib Mikati meanwhile told al-Jadeed that “a solution paper is being devised.”

Mikati is reportedly “working on resolving the dispute between the Shiite duo and the President.” Al Jadeed added

“The Justice Minister has worked on a formula that takes into consideration all the reservations over the judicial investigation through the judicial authority and not through the executive authority,” al-Jadeed said.

The TV network also noted that Aoun had left Tuesday’s session angry, saying that “no party can threaten to resort to street action.” That session was adjourned by Aoun to Wednesday after the eruption of a heated debate.

This development comes after the probe into the catastrophic Beirut port explosion was frozen on Tuesday for the second time in less than three weeks after the two politicians wanted for questioning filed a new complaint against t Judge Bitar.

The investigation has been facing obstacles since Bitar sought to question some of the most powerful people in Lebanon on suspicion that they knew about the chemicals but did nothing to avert the disaster.

Bitar is under enormous pressure from groups that have accused his probe of political bias and mounting a smear campaign against him. The leader of the powerful, heavily armed Iranian backed Hezbollah announced on Monday it wanted Bitar removed from the case.

The Aug. 4, 2020 blast, one of the biggest non-nuclear explosions on record, killed more than 218 people , injured thousands , left 300, 000 homeless after it devastated swathes of Beirut.

Apart from the suspension, senior politicians called for questioning have refused to show up and arrest warrants are not being served.

The probe was suspended in late September on the basis of a complaint questioning Bitar’s impartiality. A court rejected the complaint on procedural grounds, allowing him to continue.

Bitar is the second judge to lead the probe since Fadi Sawan was removed from the case in February on the basis of a similar complaint filed by the politicians who are now challenging Bitar’s neutrality.

“For the first time, the judicial system wants to function, but it is suffering under the political pressure and interventions,” said Paul Morcos, lawyer and professor of international law.

Shortly before being informed of the latest complaint, Bitar had issued an arrest warrant for one of the politicians who filed it, former finance minister Ali Hassan Khalil, a senior Shiite politician who is close to Hezbollah and its ally Parliament Speaker Nabih Berri .

The second politician was ex-public works minister Ghazi Zeiter, also a Hezbollah ally, who was due for questioning on Wednesday.

Hezbollah chief Hassan Nasrallah voiced his harshest criticism yet of Bitar on Monday when he called for his replacement in a televised address, saying he was biased and politicized.

Nasrallah’s remarks came weeks after Wafik Safa, a senior Hezbollah official, was said to have warned Bitar the group would remove him from the inquiry, according to a journalist and a judicial source.

Khalil’s arrest warrant is the second for a former minister arising from the investigation.

The first was issued for ex-public works minister Youssef Finianos, another Hezbollah ally, in September when he repeatedly failed to show for questioning.

All have denied wrongdoing.

But Bitar’s requests were met with resistance and legal complaints questioning his impartiality.

Even though Bitar has sought to question several politicians who are allied to Hezbollah, including Khalil and Zeiter, Diab and Fenianos he has not tried to question any members of Hezbollah itself.