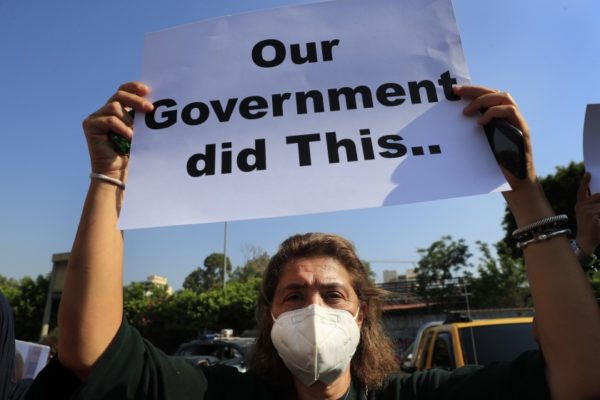 WeHe warned Wednesday the government and President Aoun against “bowing to Hiezbollah’s intimidation” concerning the dismissal of Judge Tarek Bitar. the lead investigator into the port blast case,

“If they stop the investigations, they must resign immediately,” he said.

Geagea also called for a general and peaceful strike if ” Hezbollah tries to impose its will by force.”

He added sarcastically that the “inverted logic” that has been prevailing in Lebanon for years, coupled with “imposition, threats, force and red and yellow lines,” aims to falsify and reverse facts, to violate sovereignty and to silence “free voices.”

Geagea stressed that “the successive submissions to intimidation throughout the years” have brought the Lebanese people to where they are today.

“Any additional blackmail related to the port crime is a great moral blow to the judicial institution and a direct or indirect participation in the crime.”

“A partner in crime is as responsible as the direct criminal,” he added.

Beirut port blast investigator Judge Tarek Bitar must be replaced or else Hezbollah, the Amal Movement and the Marada Movement will “suspend their participation in the government,” Hezbollah and Amal sources have reportedly warned.

“Judge Bitar was appointed through a decree and he can also be recused through a decree, although the ideal solution is to resolve the matter in the Higher Judicial Council,” sources told al-Jadeed TV on Wednesday.

The sources also claimed that Bitar is “inclined to accuse Hezbollah of the port bombing crime,” stressing that “the party cannot bear the consequences of a crime that it did not commit.”

The lead spokesperson for the external affairs of the EU, Peter Stano, warned Tuesday that the Beirut port blast investigation has to be “completed as soon as possible,” and that it should be impartial, credible and transparent.

“The investigation should be allowed to proceed without any interference in legal proceedings and those responsible for this tragedy should be held accountable,” he added.