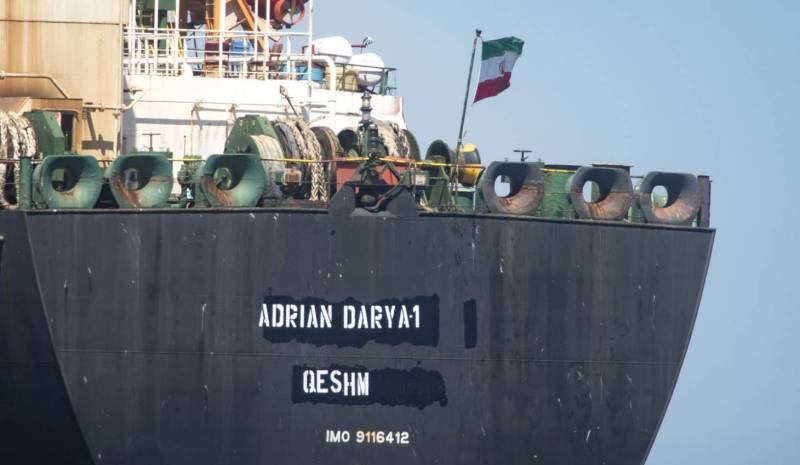 Hezbollah chief Hassan Nasrallah went on TV to launch his campaign for marketing the diesel fuel that Iran shipped to the militant group .

He announced Monday that the ship carrying diesel from Iran has arrived in Syria’s Banias port and that the transfer of fuel by land to Lebanon would begin on Thursday.

“In order not to embarrass the Lebanese state, we restored to the other option, which is for the ship to dock in Banias, and the Syrian state facilitated the movement at the Banias port and provided tankers for the transport of fuel products,” Nasrallah said in his televised address.

“We thank Syria for receiving the fuel ship … The transport of fuel from Syria to the Bekaa begins Thursday and it will be stored in specific tanks and a second ship will arrive in Banias within a few days,” Nasrallah stated.

“A third ship started loading gasoline today and we have agreed to bring a fourth ship carrying diesel and it is expected to arrive in October,” Nasrallah added.

He said the diesel will be distributed to all Lebanese components and to those who want it without “sectarian or regional discrimination.”

“We will offer a one-month diesel donation to state-run hospitals, nursing homes, orphanages, disability centers, state-run water institutions, municipalities that have water wells, the Civil Defense and the Lebanese Red Cross,” he added.

“We will cover the needs of bakeries, medicine factories, coops and foodstuffs and agricultural factories for a one-month period,” he said, noting that “the sides that provide electricity to the people through generators will get the biggest share of diesel.”

Hezbollah to distribute the fuel

Nasrallah added that the Hezbollah-affiliated Al Amana Company will distribute the fuel in Lebanon “because it is already on the sanctions list.”

“Phone numbers will be distributed to all Lebanese regions for communication and placing orders,” he said.

He added that the fuel will be sold in Lebanon below cost price.

“Our aim is not trade or profit,” he said. “Our aim is to alleviate the suffering of the people.”

“We will consider the difference a gift from Iran and Hezbollah to the Lebanese people. The price will be specified in the coming days and will be acceptable, will take people’s situations into consideration and will be in Lebanese lira,” Nasrallah went on to say pointing out that the cost will be based on the international crude oil market price .

The arrival of the Iranian tanker comes days after a new government was formed in Lebanon, ending a 13-month deadlock. Lebanon’s new Prime Minister Najib Mikati has not commented on the deal to import fuel from Iran.

Daily life has been almost paralysed as fuel dries up because Lebanon lacks the dollars to pay for it.

A financial crisis has wiped 90 percent off the value of the Lebanese pound since 2019, pushed food prices up by more than 550 percent, and propelled three-quarters of the population into poverty. The World Bank has called it one of the deepest depressions of modern history.

Commenting on the situation in Lebanon , Nasrallah welcomed the formation of the new government as a step in the right direction and thanked “everyone who contributed to this achievement.”

“Let no one expect drastic solutions during the term of this government,” Nasrallah added, while noting that “this government can alleviate the burden of the Lebanese people.”

“The priorities of this government are clear, which are the needs of the Lebanese people. We are looking forward to a government that rescues Lebanon from its collapse,” he said.

Nasrallah also called for holding the parliamentary elections on time, insisting that the vote should not be postponed.

Hezbollah’s opponents in Lebanon say the purchase risks bringing down sanctions on a country already mired in crisis, especially as Washington has designated Hezbollah as a “terrorist group”.

On the other hand  the United States is backing an effort to address Lebanon’s power shortages by bringing in Egyptian gas via Jordan and Syria.