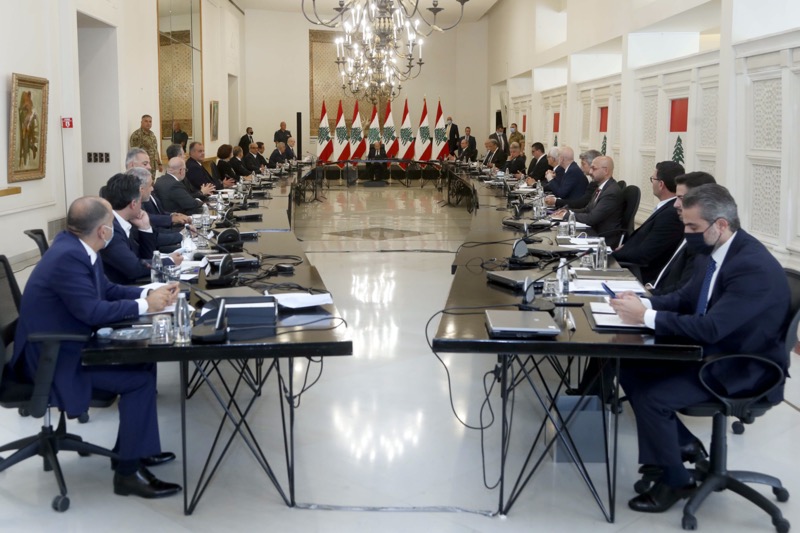 Lebanon’s newly-formed government held its first meeting Monday to discuss ways of rescuing the country from one of its worst ever economic crisis. The meeting, during which a ministerial statement is to be drafted to be submitted to a confidence vote in parliament, opened in the presence of President Michel Aoun.

Before the session, an official photo of the new government was taken in the presence of President Aoun, Speaker Nabih Berri and PM Mikati.

The cabinet formed a ministerial committee headed by Mikati to draft the ministerial policy statement.

Aoun said in a statement he hoped the committee tasked with drafting the statement would include the pursuit of negotiations with the International Monetary Fund.

Talks with the IMF on financial assistance are key to rescuing Lebanon, which for the first time defaulted on its debt last year and has since been sliding into poverty.

The ministerial committee held its first session in the afternoon at the Grand Serail and a second meeting was scheduled for tomorrow, Tuesday.

“We discussed the entire draft and made some observations,” the new minister of information Georges Kordahi said

He added that the drafting of the ministerial statement is expected to be completed tomorrow.

The Minister of Public Works Mustafa Bayram — one of two Hezbollah-appointed ministers — said that the draft ministerial statement is “good” and that “the main concern is people’s pain.”

“We will come up with a new language to address people,” Bayram added.