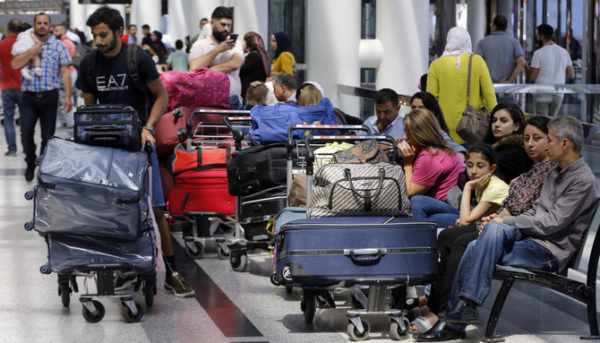 Travelers sit next to their luggage at the departure terminal of the Rafik Hariri International Airport in Beirut, Lebanon . Emigration from Lebanon is entering a state of “exodus” as the many crises hitting the small Mediterranean country remain unresolved, according to the Crisis Observatory, an interdisciplinary research program launched by the American University of Beirut.
Share:

Emigration from Lebanon is entering a state of “exodus” as the many crises hitting the small Mediterranean country remain unresolved, according to the Crisis Observatory, an interdisciplinary research program launched by the American University of Beirut.

The continuing emigration of thousands of Lebanese is reaching a tipping point, the research program noted, with alarming indicators suggesting that scores of people are escaping political, economic and social hardship.

“Airport data is misleading, as a number of those exiting the country could be doing so for tourism or business trips,” Nasser Yassine, the program’s director, told Arab News.

Yet several patterns suggest Lebanon is nearing the beginning of a mass exodus wave — the third in its history.

“The alarming percentage of Lebanese youth who want to leave, the mass migration of medical and education staff and the expected chronicity of Lebanon’s crisis are worrying signs,” Yassine said.

The Arab Youth Opinion Survey revealed last year that 77 percent of young people were thinking about emigrating — the highest rate of any Arab country.

This is a direct consequence of Lebanon’s collapse, the report noted, which has forced 61 percent of companies in Lebanon to reduce their permanent staff numbers by an average of 43 percent.

Last year, former MP Elias Hankach revealed that the number of emigration applications submitted in Lebanon exceeded 380,000, citing a source close to the Embassy of Canada to Lebanon. These applications were only for Canada, Europe, and the US, he said.

The health and education sectors, once staples of Lebanon’s identity, have also been hit hard. According to data reviewed by the observatory, 1,600 nurses have emigrated since 2019 while hundreds of educators have left for the Gulf or North America.

“At the American University of Beirut alone, 190 professors have departed, making up about 15 percent of the educational body,” the report said.

With no end in sight for Lebanon’s various crises, “hundreds of thousands will be forced to leave their homeland in pursuit of investment, work, study and retirement,” the report added.

According to World Bank data, Lebanon needs at best 12 years to return to its 2017 levels of GDP, and in the worst case up to 19 years.

This suggests a “deliberate collapse given the absence of a political decision with a serious approach to the Lebanese crisis,” the observatory said.

“If we add to these three ‘local’ indicators another factor, which is the increasing need for labor, professionals and youth in many (of) the most advanced countries in the world, which are witnessing a decline in population growth rates and an increase in the proportion of the elderly, then we can conclude a large wave of Lebanese immigration in the coming years,” the report concluded.

Lebanon’s national currency has lost some 90 percent of its value since mass protests erupted in late 2019, plunging over 50 percent of the population below the poverty line, according to the World Bank.

The crisis has spared no one, with outgoing Interior Minister Mohammad Fehmi deploring an increase in desertions among the ranks of the Internal Security Forces, who have seen their purchasing power collapse.

Speaking Tuesday with Lebanese daily Al-Joumhouria, Fehmi said “the rate of desertion of ISF agents has recently increased, as some have sought new sources of income.”

Salaries of most security agents and officers have plummeted to below $50 per month at a time when clashes between Lebanese as a result of acute fuel shortages are on the rise.