Aoun admits Lebanon system is corrupt but blames others for it 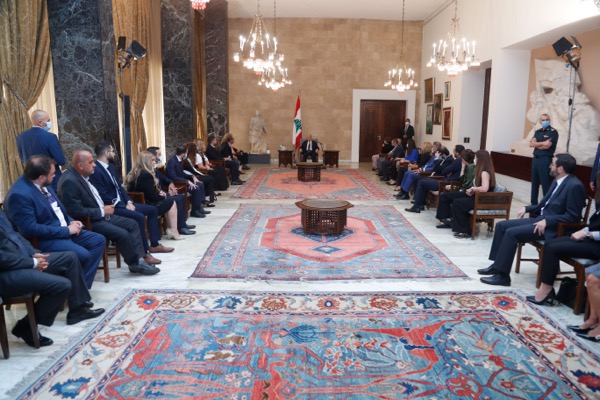 During a meeting with a youth delegation at the presidential palace in Baabda President Michel Aoun on Sunday admitted that a “corrupt system” is still “controlling the country and the people, ” but refrained from accepting any responsibility . He blamed others for it
Share:

President Michel Aoun on Sunday admitted that a “corrupt system” is still “controlling the country and the people.”

“The foiling of every plan proposed for financial and economic recovery, or the failure to devise it in the first place, means one thing, which is that the corrupt system that is still controlling the country and the people fears accountability and penalization,” Aoun told a youth delegation at the Baabda Palace.

“Refraining from identifying the financial losses and distributing them among the central bank, the banks and the state has led to two dangerous things: the first is concealing those responsible for the country’s financial ruin, and the second is burdening the people alone with the financial collapse,” the President added.

he added that t the people “must know who is humiliating them on daily basis ” and “preventing them from freely using their bank-held money and assets,” Aoun lamented that “the people are robbed and are being robbed on daily basis!”

“Words must be said and action must be taken,” Aoun urged without accepting any responsibility for the financial collapse of Lebanon .

The majority of Lebanese youth are annoyed that Aoun blames everyone but himself for the corruption and and unfulfilled promises . “You have the biggest number of MPs in the parliament,” one protester said last month of Aoun. “If you can’t do something, who’s going to do something?”

During Aoun’s tenure Lebanon went to hell as he himself admitted .

For the first time ever Lebanon defaulted on its foreign debt in 2020 .

During Aoun’s tenure the Lebanese pound , its national currency lost over 90 % of its value

Poverty in Lebanon drastically increased during Aoun’s tenure and now affects about 74% of the population, warned the UN Economic and Social Commission for Western Asia (ESCWA) on Friday.

Lebanon is battling what the World Bank has described as one of the planet’s worst financial crises since the 1850s, which has left about three-quarters of the population living below the poverty line

During Aoun’s tenure an explosion that rocked the Beirut Port killed 218 people, injured 7000, destroyed a large section of Beirut , sending 300, 000 people homeless . The explosion was caused by 2750 tons of ammonium nitrate that his ally the Iranian backed Hezbollah stored at the port for nearly 7 years for use by its ally the Syrian regime in making barrel bombs for killing Syrian civilians. Aoun knew officially about the ammonium nitrate 2 weeks before the explosion but did nothing about it .

“He started a war with Syria, and he ran away,” said one protester , who accused Aoun of stealing money from the Lebanese people to fund his 14-year exile in France. “Where did you get the money from? Were you working in Paris making croissants? No.” the protester said

Aoun fled to the French embassy in 1989 after he was defeated by the Syrian army . He was smuggled out of Lebanon by the French in 1991 and returned just days after the last Syrian tanks left the country in 2005, amid massive anti-Syrian protests spurred by the assassination of former Prime Minister Rafik Hariri.

Hind Rmeily, a 45-year-old teacher, was among those who welcomed him back.

“We thought, finally someone could translate our hopes into reality,” Rmeily said.

“We felt betrayed,” said another protester “Aoun used to say, ‘We want only the Lebanese Army in the south. We don’t want any militias. We only want the army to have weapons.’ Everything he said before, he did the opposite.”

Aoun spent decades rallying against Syrian occupation and foreign interference in Lebanon—founding the Free Patriotic Movement, whose very name implies a new era of independence—only to turn around and form a government with Hezbollah.

“He gave Hezbollah the Christian cover they wanted, and they gave him whatever he wanted , the presidency and we got screwed.”  said another protester

“When Aoun became president, we said, ‘OK, your lifelong dream is fulfilled. Let’s see what you’re going to do,’” another protester said, “and he did shit.”

The corrupt system Aoun is referring to is being nourished and defended by his Iranian backed Hezbollah ally .

For over a year Aoun has been obstructing the formation of a government because he is more  interested in ensuring that his son-in-law Gebran Bassil inherits the presidential office than a new cabinet .

Bassil is by far the most despised politician in Lebanon