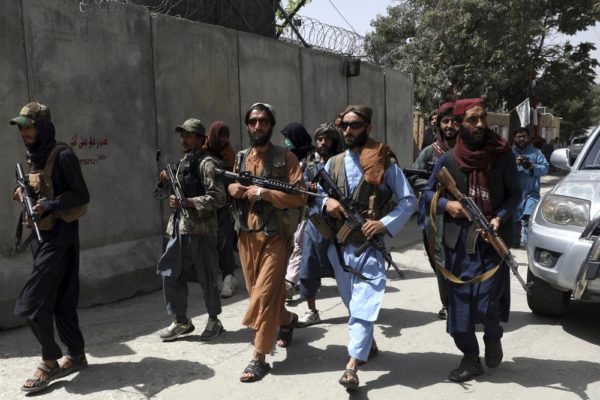 Taliban fighters patrol in Wazir Akbar Khan neighborhood in the city of Kabul, Afghanistan, Wednesday, Aug. 18, 2021. The Taliban declared an “amnesty” across Afghanistan and urged women to join their government Tuesday, seeking to convince a wary population that they have changed a day after deadly chaos gripped the main airport as desperate crowds tried to flee the country. (AP Photo/Rahmat Gul)
Share:

KABUL, Afghanistan (AP) — The Taliban violently broke up a protest in eastern Afghanistan on Wednesday, killing at least one person as they quashed a rare public show of dissent. The militant group meanwhile met with former officials from the toppled Western-backed government.

The insurgents’ every action in their sudden sweep to power is being watched closely. They insist they have changed and won’t impose the same draconian restrictions they did when they last ruled Afghanistan, all but eliminating women’s rights, carrying out public executions and harboring al-Qaida in the years before the 9/11 attacks.

But many Afghans remain deeply skeptical, and the violent response to Wednesday’s protest could only fuel their fears. Thousands are racing to the airport and borders to flee the country. Many others are hiding inside their homes, fearful after prisons and armories were emptied during the insurgents’ blitz across the country.

Dozens of people gathered in the eastern city of Jalalabad to raise the national flag a day before Afghanistan’s Independence Day, which commemorates the end of British rule in 1919. They lowered the Taliban flag — a white banner with an Islamic inscription — that the militants have raised in the areas they captured.

Video footage later showed the Taliban firing into the air and attacking people with batons to disperse the crowd. Babrak Amirzada, a reporter for a local news agency, said he and a TV cameraman from another agency were beaten by the Taliban as they tried to cover the unrest.

A local health official said at least one person was killed and six wounded. The official was not authorized to speak to media and so spoke on condition of anonymity.

Meanwhile, videos from the Panjshir Valley north of Kabul, a stronghold of the Northern Alliance militias that allied with the U.S. against the Taliban in 2001, appear to show potential opposition figures gathering there. It’s in the only province that hasn’t yet fallen to the Taliban.

Those figures include members of the deposed government — Vice President Amrullah Saleh, who asserted on Twitter that he is the country’s rightful president and Defense Minister Gen. Bismillah Mohammadi — as well as Ahmad Massoud, the son of the slain Northern Alliance leader Ahmad Shah Massoud. It’s unclear if they intend to challenge to the Taliban, who seized most of the country in a matter of days last week.