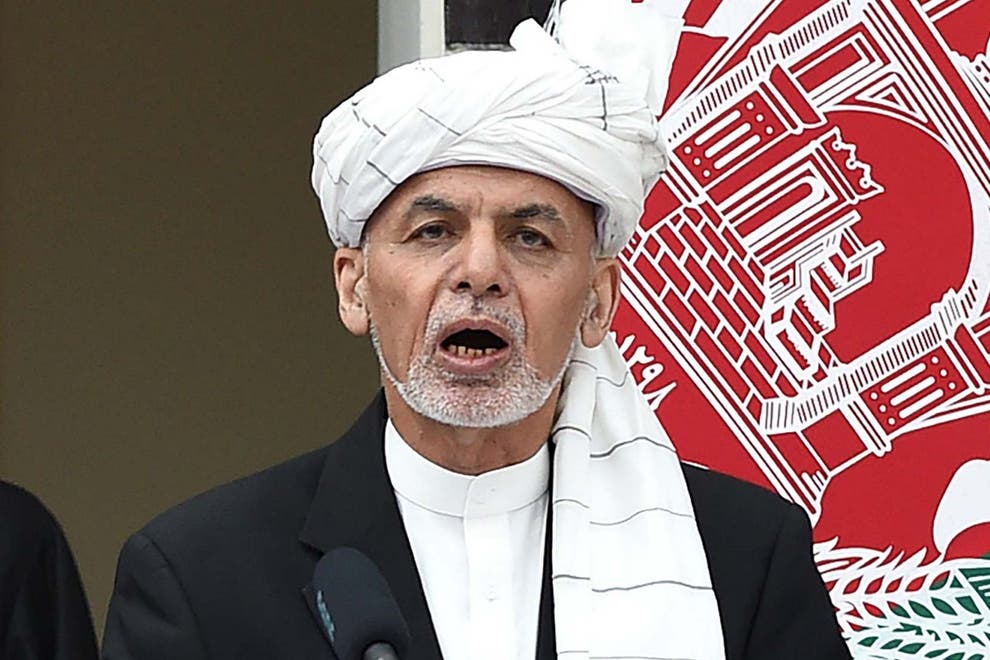 File photo of Ousted Afghan President Ashraf Ghani. Russia claimed on Monday that Ghani fled Afghanistan with four cars and a helicopter all stuffed full of cash, “and some of the money was left lying on the tarmac.” A Russian embassy spokesman added ﻿
Share:

“The UAE Ministry of Foreign Affairs and International Cooperation can confirm that the UAE has welcomed President Ashraf Ghani and his family into the country on humanitarian grounds,” the Foreign Ministry said in a statement Wednesday, which was later posted to its website.

Ghani left Afghanistan on Sunday evening, with no announcement or clear reporting on where he was going. As the Taliban entered the presidential palace and declared the war “over,” Ghani, 72, said he fled to prevent “a flood of bloodshed.”

“The Taliban have won with the judgment of their swords and guns, and are now responsible for the honor, property and self-preservation of their countrymen,” Ghani said. He was elected president twice, the first time in September 2014.

The White House, Pentagon and State Department did not immediately respond to CNBC’s request for comment.

Taliban forces made a series of stunning advances across the country of 39 million in the wake of the Biden administration and NATO announcing a full departure of U.S. and coalition forces by the end of August.

Amid the exodus of foreign troops, the Taliban were able to declare near complete control of the country within 10 days of seizing their first provincial capital.

Despite being vastly outnumbered by the Afghan military, which has been assisted by U.S. and coalition forces for the last 20 years, the Taliban entered Kabul on Sunday.

“The truth is this did unfold more quickly than we had anticipated,” Biden said in a speech from the White House on Monday, adding that he had been assured by the now-deposed Ghani that the U.S.-trained and equipped Afghan troops would hold their positions.

“Mr. Ghani insisted the Afghan forces would fight, but obviously he was wrong,” Biden said.

“American troops cannot and should not be fighting in a war and dying in a war that Afghan forces are not willing to fight for themselves,” Biden said. “We gave them every chance to determine their own future. We could not provide them with the will to fight for that future.”

From NATO’s headquarters in Brussels, Stoltenberg said, “The failure of Afghan leadership led to the tragedy we are witnessing today.”

“Despite our considerable investment and sacrifice over two decades, the collapse was swift and sudden. There are many lessons to be learned,” he told reporters Tuesday.

“Ultimately the Afghan political leadership failed to stand up to the Taliban and achieve the peaceful solution that Afghans desperately wanted,” Stoltenberg, leader of the 30-member-strong military alliance, added.