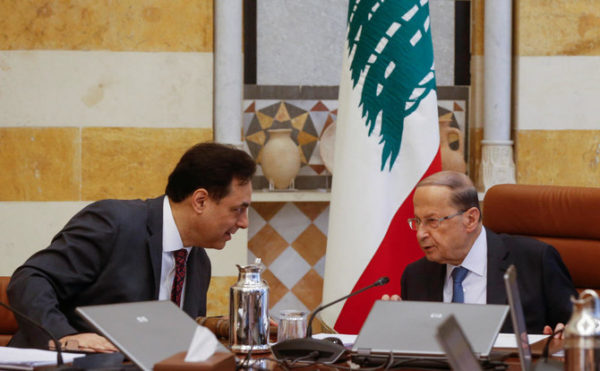 The Media Office of caretaker PM Hassan Diab issued a statement, saying: “Since the government has resigned since August 10, 2020, and in compliance with the text of Article 64 of the Constitution, which limits the powers of the resigned government to the narrow sense of the conduct of business, and to prevent any confusion, caretaker Prime Minister Hassan Diab still maintains his initial position , which is not to violate the constitution, and therefore not to invite the cabinet for a meeting.

This development comes after President Michel Aoun, called arlier today on the cabinet to convene exceptionally for the utmost necessity for a session devoted to addressing the repercussions and dangerous consequences of the causes of the fuel crisis , based on paragraph 12 From Article 53 of the Constitution.
According to Central Bank Governor Riad Salameh all top officials knew about the decision on lifting the fuel subsidy way before he announced it .

Aoun’s call for a cabinet meeting was attacked by the Future Movement which is headed by former PM Saad Hariri . The Future Movement accused Aoun’s son-in-law Gebran Bassil of manipulating the president and warned Aoun against violating the constitution .

Earlier today reports circulated that Aoun was sick , but the presidential office denied the reports , insisting Aoun is in good health.

Aoun has reportedly been suffering from bipolar disorder for. decades

People who have bipolar disorder can have periods in which they feel overly happy and energized and other periods of feeling very sad, hopeless, and sluggish. In between those periods, they usually feel normal. You can think of the highs and the lows as two “poles” of mood, which is why it’s called “bipolar” disorder.

Bipolar disorder can lead to extreme erratic behavior, with manic “up” periods that last at least a week..